The Economics of “Adopting A Highway” 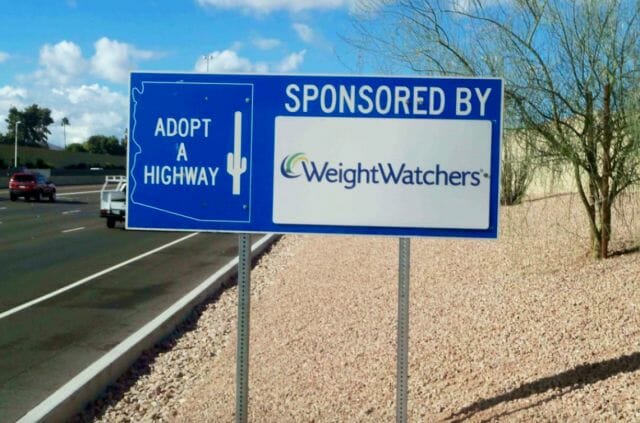 This article was written by Alex Mayyasi, a Priceonomics staff writer. An earlier version of this story was published on March 19, 2014.

The Adopt A Highway concept began with an effort in the 1980s to rally volunteers in Texas to keep highways clear of trash. It has since become a national practice, and, inevitably, a niche industry of businesses (like Adopt-A-Highway Litter Removal Service of America Inc) that help corporate America to adopt highways.

These adoption agencies exist thanks to a certain compromise made by the managers of our nation’s highways: Companies would love to buy giant billboards, and states would love to have that money. But federal guidelines ban gratuitous signs alongside highways. As a result, the next best option is for companies to pay to clean up highways—and get a bit of advertising out of the small “Adopt A Highway” signs that are posted in thanks.

It’s a corporate takeover of what was once a purely charitable act of volunteering. And it seems to be working pretty well.

When Teryl Macia adopted part of California’s Pacific Coast Highway in the late 1980s, she realized that she’d “bit off more than she could chew.” Macia had a small marketing firm, and she thought she could promote it by adopting a highway. She knew that the state put up signs thanking volunteers, and she saw it as a good way for people in the area to see the name of her business.

Adopt A Highway began with volunteers—not corporate sponsors. In the 1980s, an employee of the Department of Transportation rallied volunteers to tackle the immense job of keeping the state’s highways clear of litter. The idea spread, and by 1985, a community service club “adopted” a 2-mile stretch of highway by taking responsibility for its cleanup once a season. To recognize the group’s efforts, Texas placed the first “Adopt A Highway” sign.

The idea slowly spread over the following decades. Today, nearly every state runs an Adopt A Highway program, as do Puerto Rico and several other countries.

Macia didn’t have a devoted crew of volunteers, though. Just a small business. So she asked the local Adopt-A-Highway coordinator for help hiring a crew to clean her stretch of the highway, and realizing the value of the setup, she founded a company to help other companies gain exposure by adopting a highway. She named it the Adopt-A-Highway Litter Removal Service of America (AAHLRSA). It’s still acting as a foster agency for America’s highways, and not it has a number of competitors.

The enduring appeal of adopting a highway, according to current CEO Melinda Centner, is that it is a relative bargain by advertising standards. Adopting (or sponsoring) a highway through AAHLRSA costs $200-$600 per month. In contrast, billboards that are visible from highways often cost $7,000-$14,000 per month. Centner and her peers describe adopting a highway as the cheapest way to get a company name in front of customers’ eyeballs. 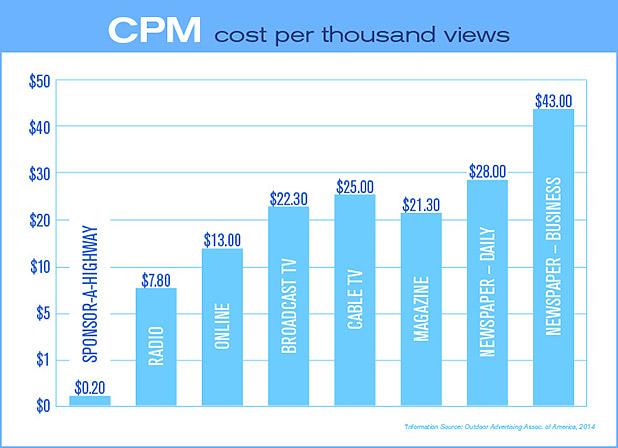 That said, Adopt a Highway signs come with limitations that make big-time marketers wary. Due to the same federal regulations that don’t allow billboards alongside the highway itself—motivated by concerns that extra signs would distract drivers—companies can only put their name and logo on Adopt A Highway signs. Phone numbers, slogans, or URLs, Centner says, are not allowed.

Given these limitations, companies are often drawn to adopting highways by the message implied by the act of supporting a local cause. When we ask Centner if companies pay for AAHLRSA’s services from their marketing or charity budgets, she replies, “I think both. A lot of the time it’s from the marketing budget.” Testimonials from pleased clients cite both that the “cost is nominal relative to the exposure” as well as the “message it sends to the community” in terms of being a good citizen. This combination of low cost and messaging make it attractive to small, local businesses. That’s why you’re more likely to see a highway adopted by a nearby car dealership or a local franchise of a fast food chain than by a company like Coca Cola.

It may seem a bit unseemly for companies to take advantage of a program whose origins are in celebrating volunteerism in order to maximize name exposure. But most states seem to like the arrangement. AAHLRSA signs one to two year commitments to clean up roadways on states’ behalf, and their professional crews can handle busy stretches of road where a group of active seniors or Boy Scouts would not be allowed. The cost savings can be significant too. In Texas, 10% of its roadways (9,000 miles) are adopted, which saves the state $5 million annually.

Today all but a few states run Sponsor A Highway programs for companies to pay others to clean up roadways on their behalf. A few states like California group both volunteers and corporate sponsors under the Adopt A Highway name, and a state like Illinois, which doesn’t allow organizations to subcontract out the work, is part of the minority.

The Adopt A Highway program has just had a few moments in the limelight.

Otherwise the Adopt A Highway business occupies a quiet niche. It’s also a quiet testament to a surprising fact: that the Texas Department of Transportation is king among Departments of Transportation in terms of new approaches to fighting litter. In 1985, Texas unveiled a new, now famous slogan to discourage littering: “Don’t Mess With Texas.” The slogan appeared on highway signs and in a prominent ad played during the Cotton Bowl the same year that the first Adopt A Highway sign thanked volunteers for helping the state keep its highways clean.

If you’ve ever wondered about the origins of adopted highways during a long drive, you now have your answer: Texas, the home of innovative, litter-battling transportation agencies.

Our next post investigates the triumph of the average over the median and the mode. To get notified when we post it →  join our email list.