The Places in America that Use the Most (and Least) Pesticides 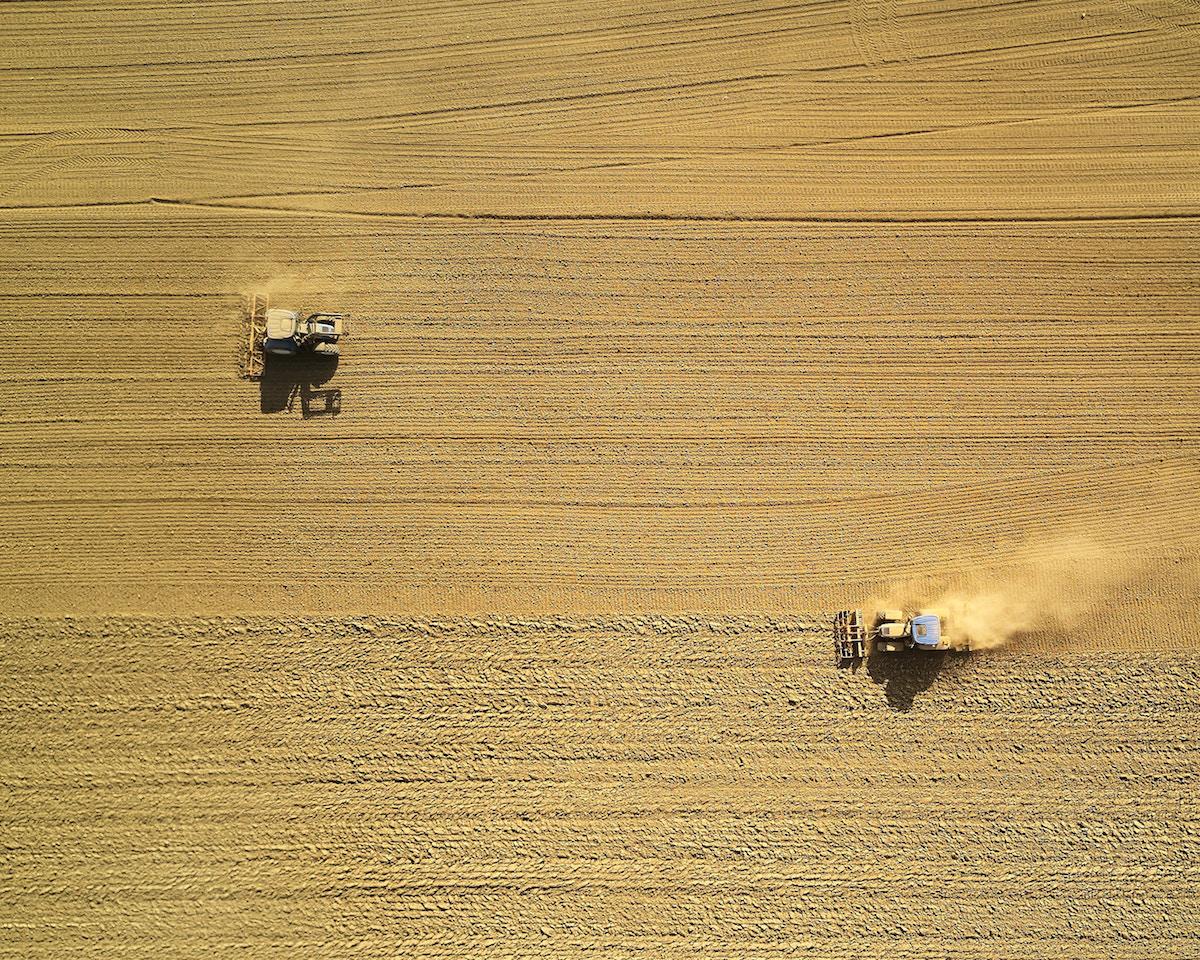 With the recent second verdict where a jury ruled that Roundup weedkiller contributed to a man’s cancer, controversial pesticides, herbicides and fungicides are once again in the news.

These chemicals, particularly the herbicide glyphosate (the active ingredient in Roundup) have long played a role in American agriculture, but their health risks are only now being understood. As a result, thousands of cancer lawsuits have been filed against Monsanto, the company that invented Roundup, and Monsanto’s new parent company, Bayer AG.

Along with Priceonomics customer WeedKillerCrisis We decided to analyze data to uncover which states in the United States had the most and least exposure to pesticides, herbicides and other agricultural chemicals, with a particular focus on glyphosate, the active ingredient that is in the news right now. We looked at data from the U.S. Geological Survey (USGS) to see which compounds were most popular and which locations had the highest usage levels of these chemicals.

By a significant margin, the most popular herbicide in the United States is glyphosate, which is four times more popular than the second most popular chemical. Not surprisingly, large agricultural states like California, Washington, and Illinois use the most pesticides.

However, some states that use a lot of these chemicals see very little glyphosate usage, while others nearly exclusively use the compound. In California for example, only 6 percent of pesticide usage is glyphosate, while in Montana, 52 percent of such usage is from glyphosate.

Before diving into the results, it’s worth spending a moment on the methodology and data source. We looked at data from the Pesticide National Synthesis Project published by the USGS, a division of the Department of the Interior that estimates pesticide, herbicide, and fungicide usage in agricultural operations throughout the 48 continental states. Some of these compounds (like glyphosate) are technically herbicides, but for the purposes of this article, we’re using the term pesticide to cover all such chemicals, as the USGS data does. We looked at the most recent data that was available for all states (2016) and used the high-end estimates provided.

The USGS counts over 400 pesticides as part of its survey, but the top 20 pesticides make up 80 percent of all pesticide usage. The chart below shows the estimated usage of these pesticides by kilogram:

By a significant margin, glyphosate is the most popular pesticide used in American agriculture. Over 130 million kilograms were used in 2016, which was approximately four times more than the second-place pesticide, Atrazine.

In total, just over 544 million kilograms of pesticides were used in the U.S. in 2016, and 24 percent of that was glyphosate. It’s hard to overestimate just how pervasive Roundup and glyphosate are this country.

In general, where are pesticides most common in the United States? The next chart shows kilograms of all pesticides used in each state measured by the USGS data. 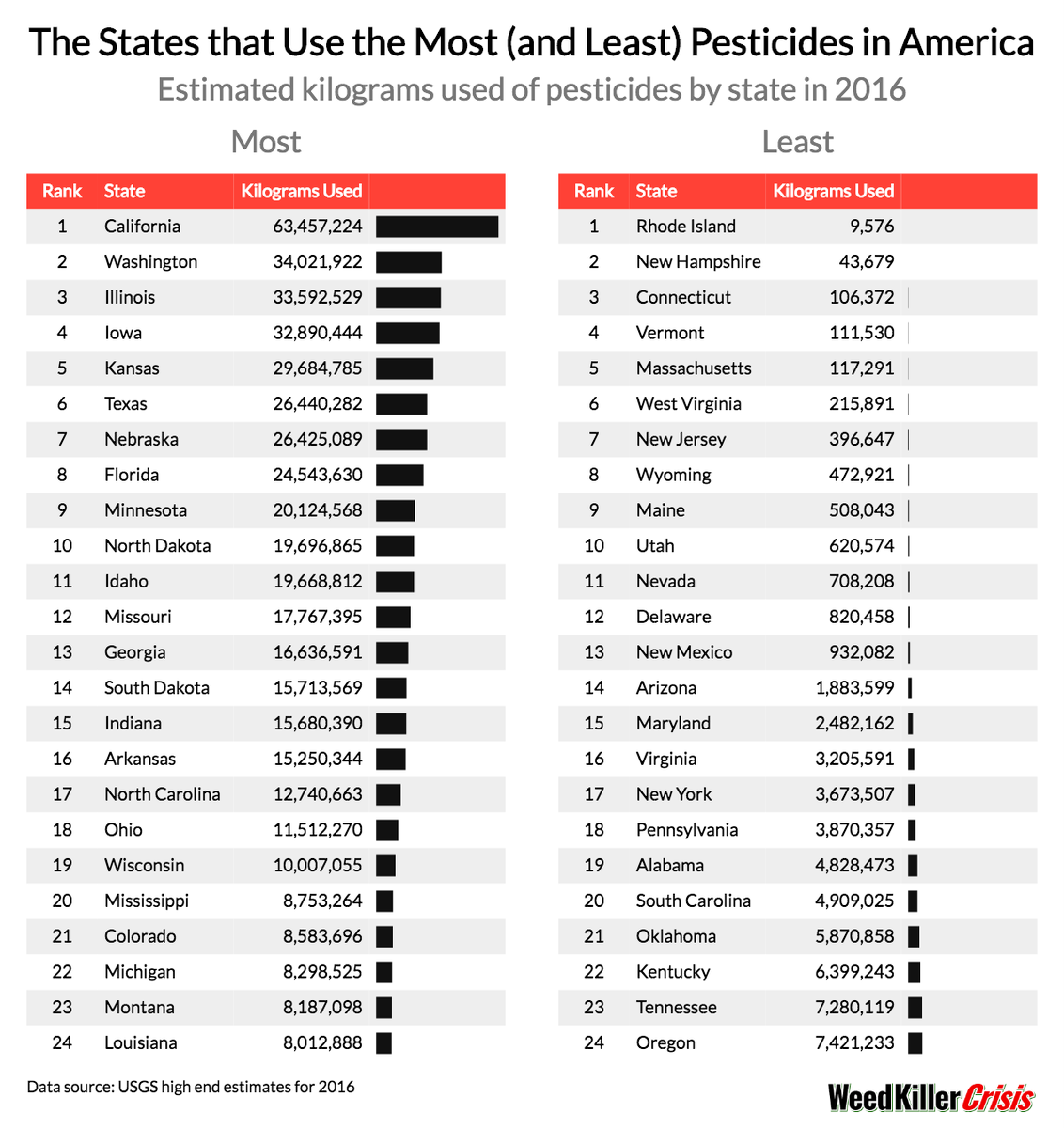 Which states use the most and least glyphosate, the compound that’s currently making headlines for causing cancer? The next chart shows kilograms of glyphosate used in each state.

It’s worth noting that just because a state has a lot of agriculture or uses a lot of pesticides, that doesn’t necessarily mean that glyphosate is the favored pesticide in farming throughout the state. The chart below shows the percentage of pesticide usage by state for glyphosate versus all pesticides:

For states like Montana and South Dakota, approximately 50 percent of pesticide usage is for glyphosate. In general, states in the Great Plains and Midwest dominate the list of areas that are most reliant on glyphosate-based treatments, which can largely be traced to what is grown in those regions.

According to the USGS, corn and soybeans are the crops that are most frequently treated with glyphosate, and these crops are more common in these geographies. For instance, Illinois and Iowa are the top two glyphosate-using states, and they’re also the top-producing states for both corn and soybeans. On the other hand, California sees than 6 percent of pesticide usage from glyphosate-based products, while in Maine and Nevada less than 2 percent of pesticide usage is for glyphosate.

Where Is Glyphosate Banned in America?

Lastly, a number of places in America have banned glyphosate or are making efforts to severely limit the use of pesticides, herbicides and other similar chemicals. The chart below, via the Texas Organic Research Center, shows a list of some bans currently underway or being considered:

With the recent Roundup verdicts, it’s likely that the number of glyphosate-related legal cases will only continue to increase. Pesticide usage is most common in large agricultural states like California, but that doesn’t mean those states use a lot of glyphosate-based products. For example, in California only 6 percent of its pesticide usage is glyphosate, where as in Montana that number is 52%.

States in the Great Plains and Midwest tend to use glyphosate at the highest rate, while a number of locations (mostly on the coasts) are starting to ban the chemical. As glyphosate continues to dominate the news and the health effects are better understood, it’s likely these bans may keep accelerating.