What is the Internet’s Favorite Book? 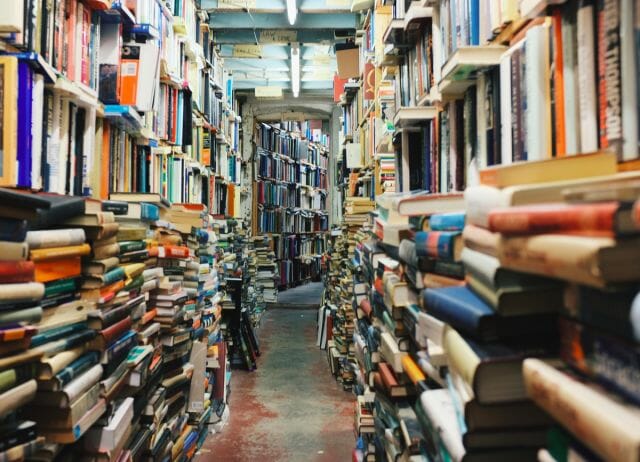 Which is the better book: War and Peace or installment one of The Hunger Games?

If you ask a book reviewer or look at any of the “Best Book” lists compiled by  critics, you would say War and Peace. But what if you asked everyday readers on the Internet?

Over four million members of the website Goodreads have rated the first installment of The Hunger Games on a 1-5 scale, and it has received an average score of 4.36. It currently sits atop a Goodreads crowdsourced list of “Best Books Ever”. By comparison, the average score given by the 150,000 people who have rated War and Peace is 4.10, and it ranks 724th on the “Best Books Ever list”.

It’s no surprise that on a crowdsourced ratings site, a briskly paced young adult novel beat out a dense, 1,000 page philosophical epic about Napoleon’s invasion of Russia. And it’s probably not exactly the same group of people rating the Hunger Games and War and Peace. They likely have different backgrounds and expectations in literature.

Still, Goodreads ratings provide a glimpse into the literature that people actually like the most, and how that might differ from the critics. We know what the literati think from the variety of literary prizes and lists of books you must read before you die. But what do the people say? We collected the ratings for tens of thousands of books on Goodreads to find out.

Our analysis shows that the books people are most exuberant about include Calvin and Hobbes, manga and South American poetry. And if you want to read a classic blessed by both the critics and the Internet, you should pick up a novel by Robert Graves or Vladimir Nabokov—and avoid James Joyce like the plague. We also found that George R.R. Martin is the king of fantasy and Nigella Lawson the queen of cookbooks, and that Goodreads ratings suggest that David Foster Wallace is the 57th most loved fiction writer. 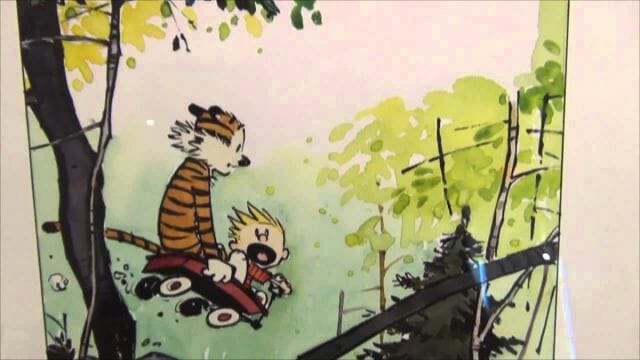 Calvin and Hobbes collections are among the most highly rated books on Goodreads.

The website Goodreads was launched in 2007 as a social platform for readers to share their book recommendations and catalogue what they have read. The website now has over 20 million users and contains the world’s largest repository of book ratings. Well over 500 million ratings have been given to the more than 10 million books listed on the site.

Rather than collect the rating for every single book, we chose to collect data on the ten most popular books by each of the 9,000 authors who appear on Goodreads’ Best Books Ever list – a list which is independent of user ratings and voted on by particularly active members. We ended up with a dataset of over 23,000 notable books.

With this data in hand, we turned to the question of which books the Internet think are best.

The following table displays the twenty highest rated books in our dataset. We only included books with over 2,000 ratings. For reference, the average book gets a rating of 3.98. 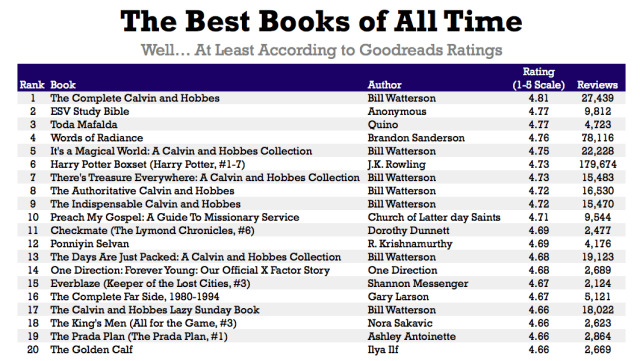 With a score of 4.81, the highest rated book is Bill Watterson’s The Complete Calvin and Hobbes. Over 27,000 users have rated the book, and considerably more than 80% of them have given it five stars. It scores just ahead of the ESV Study Bible – an English Standard Version of the Bible with evangelical commentary.

Five of the top twenty rated books are Calvin and Hobbes’ collections. The dominance of Bill Watterson’s comics about a young boy and his stuffed tiger can be looked at in two ways. One, almost everyone who reads this book loves it, or two, Calvin and Hobbes fans are unusually devoted to the strip and likely to vote on Goodreads. It is likely some combination of the two.

Comics are well represented on this list of Goodreads most loved books. “Toda Mafalda”, which is third on the list, is a collection of comic strips by the Argentinian cartoonist Quino. “The Complete Far Side”, a collection of work by the cartoonist Gary Larson, is 16th. Religious and fantasy novels also do well.

The books that receive the most ratings on Goodreads, such as the Harry Potter and the Game of Thrones series, do not appear on this list. In fact, none of the 55 books that have received over a million ratings score above 4.6.

Are the most popular books also well loved? The chart below displays the number of ratings and average rating for every book in our dataset. 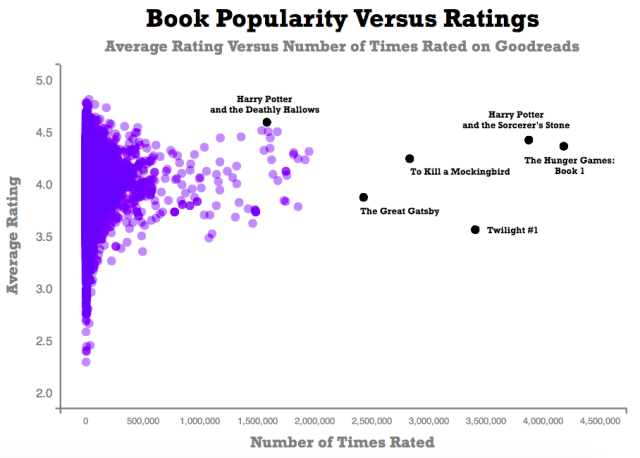 The five most reviewed books on Goodreads are the first books in The Hunger Games, Harry Potter and Twilight series, and the novels To Kill a Mockingbird and The Great Gatsby. The highest performing of these megahits is Harry Potter and the Sorcerer’s Stone, which has a rating of 4.42.

The Harry Potter series also has the most highly rated book that has over one million ratings: Harry Potter and the Deathly Hallows has nearly 1.6 million reviews and scores a 4.59. Apparently, if you get to the seventh installment in a series, you probably really like it.

Harry Potter books combine popularity with high ratings like no others.

Beyond looking at the Internet’s favorite books, we also analyzed who Goodreads has anointed as the greatest author. We measured this by looking at the average ratings of authors’ books. We consider only authors with five books or more on Goodreads.

As you might expect given the adoration of Calvin and Hobbes, Bill Watterson is number one on the list of most loved authors. He is followed by a diverse set of writers (and one religious institution). 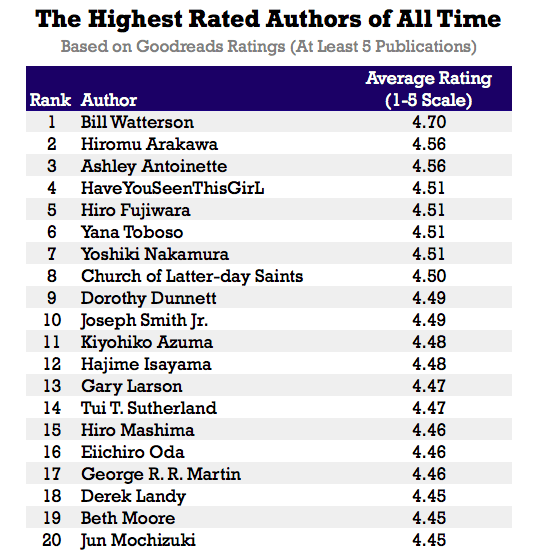 Hiromu Arakawa and eight other authors on this list are Japanese manga artists. Manga is a type of Japanese comic book/graphic novel that is increasingly popular internationally. Manga authors like Arakawa, Hiro Fujiwara, Yana Toboso and Yosihiki Nakamura consistently publish books that get rave reviews.

Ashley Antoinette – third on the list – is the author of the “racy” and popular Prada Plan novels. Antoinette’s books, which she frequently co-authors with her husband JaQuavis Coleman, all have thousands of ratings with an average above 4.5.

The Church of Latter-day Saints is the only non individual author to make the list. Books published by this institution, such as the Book of Mormon and True to the Faith, all score highly on Goodreads. While other religious institutions also publish books, none have such fervent support.

Our list of top twenty authors is dominated by just a few genres: comics, religion and young adult. The readers of genres like business, history and memoir seem to be more critical. The following list shows the top author of each genre – we assigned authors to the first genre listed on their Goodreads author page. ChickLit is a genre name given by Goodreads, not Priceonomics. 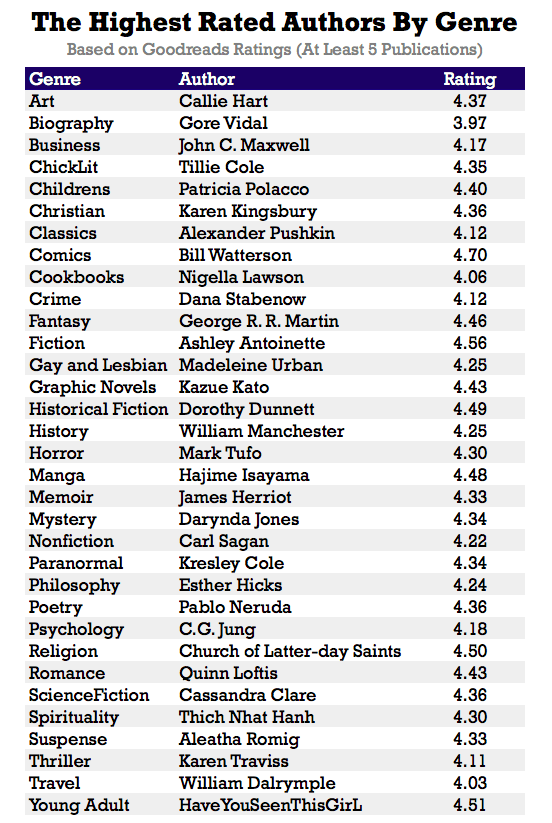 Most genres are topped by a famous author. Gabriel Garcia Marquez once called Pablo Neruda the greatest poet of the 20th Century, and the Internet agrees. Gore Vidal, a celebrated biographer of Abraham Lincoln and Aaron Burr, tops his genre. George R. R. Martin beats out J.R.R. Tolkien for the top spot in Fantasy.

Other authors are less well known. It is not Dr. Seuss or Maurice Sendak who tops the Children’s book genre, but Patricia Polacco. Polacco’s five most popular books all get ratings over 4.3, and her most popular book, the autobiographical Thank You, Mr. Falker, receives a 4.51. The most highly rated Science Fiction author is Cassandra Clare. Clare’s novel City of Bones has received over one million reviews, and her ratings are consistently better than luminaries like Isaac Asimov and Ursula K. Le Guin.

Thus far, our most highly rated lists do not include history’s most celebrated authors like Shakespeare, Jane Austen, Charles Dickens, and George Eliot. We wondered if they would show up if we focused exclusively on authors who Goodreads designates as part of the genre “fiction”. 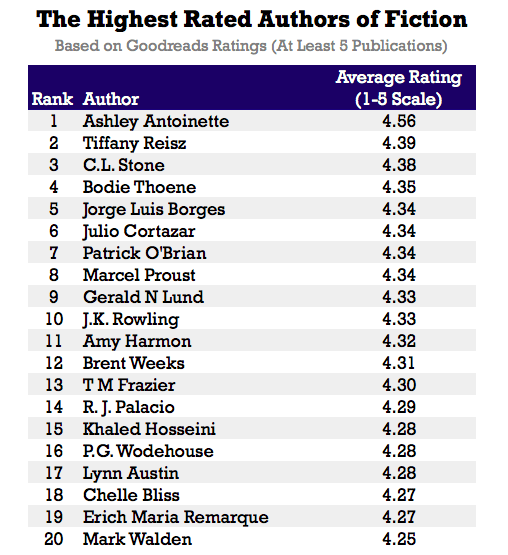 This list includes writers of contemporary pop fiction like Ashley Antoinette and romance novelists Tiffany Reisz and C.L. Stone, but also members of the literary canon. The Argentine short-story writer Jorge Luis Borges and the French novelist Marcel Proust, who are considered among modern literature’s most influential authors, both make the top ten.

Still, very few authors of the classics make the list. The most hallowed authors are not the Internet’s favorites.

So which classics are also crowd-pleasers? To assess which classics people actually like, we looked at the average rating of the top 50 books on thegreatestbooks.org, a list that combines the results from more than one hundred other best books lists. (The list has a heavy European and North American bias.) Books are ranked by their Goodreads rating. 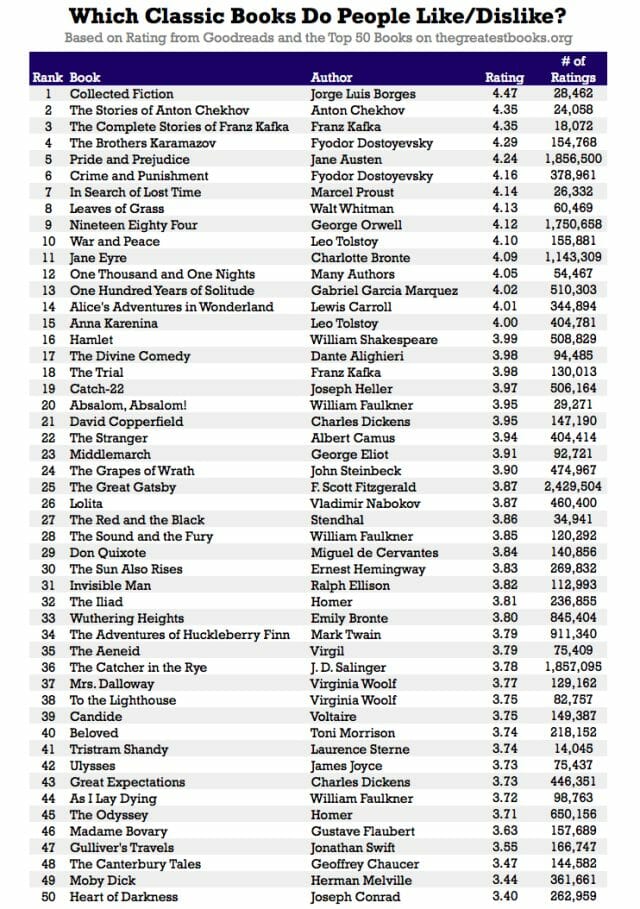 The highest rated classic is the Collected Fiction of Jorge Luis Borges. Borges’s Collected Fiction is one of three short story collections that top the list, along with the works of Anton Chekhov and Franz Kafka. It’s a bit of a surprise to see the works of these challenging authors perform so well. Maybe we would all be happier with our literary lives if we read more short stories.

It’s worth noting that Goodreads profiles are public to your friends, so some of these ratings may be impacted by social pressure or a desire to exhibit a certain sensibility. The strong ratings of these tougher classics could be due to literary snobs who pretend to like In Search of Lost Time.

Dostoevsky’s The Brothers Karamazov and Jane Austen’s Pride and Prejudice are the top two novels on the list. Pride and Prejudice is the only classic novel with over one million ratings and an average rating above 4.2. Elizabeth and Darcy bring the quantity and quality.

Heart of Darkness and Moby Dick receive the worst ratings among the classics. Herman Melville and Joseph Conrad’s dark stories of insane men may be celebrated by literary critics, but the Internet is not impressed. Generally, older books perform worse on Goodreads. Ulysses, The Odyssey, Gulliver’s Travels, and the Canterbury Tales are all among the ten worst rated classics.

These old books rate quite poorly, but their low scores pale in comparison to the very least liked books. The following table shows the twenty books with the lowest ratings that were rated at least 2,000 times. 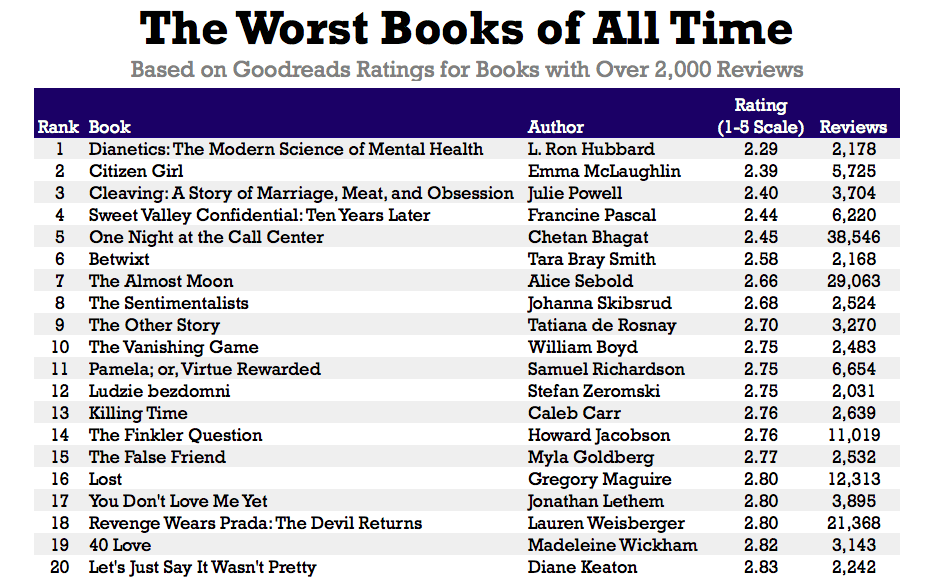 The most loathed book in the dataset is L. Ron Hubbard’s Dianetics: The Modern Science of Mental Health with a rating of 2.29. Hubbard is the founder of the Church of Scientology. His book is on his theory of psychotherapy.

The book which best combines popularity and dislike is One Night at the Call Center by the Indian author Chetan Bhagat. Bhagat’s books, which mostly focus on India’s “new” young middle class, are wildly popular in India, but also disdained in literary circles.

Just like restaurants and mechanics, books are now at the mercy of online rating systems. It may seem perverse to critics to take a piece of literature and reduce to a 1-5 rating, but millions of of readers on Goodreads to just that.

Our examination of these ratings show that the books people rate highest are generally not those that win the Man Booker or Pulitzer Prize. They are crowd-pleasers like Calvin and Hobbes, Japanese comic books and other books with devoted followings. When the Internet decides, James Joyce doesn’t hold a candle to J.K. Rowling.