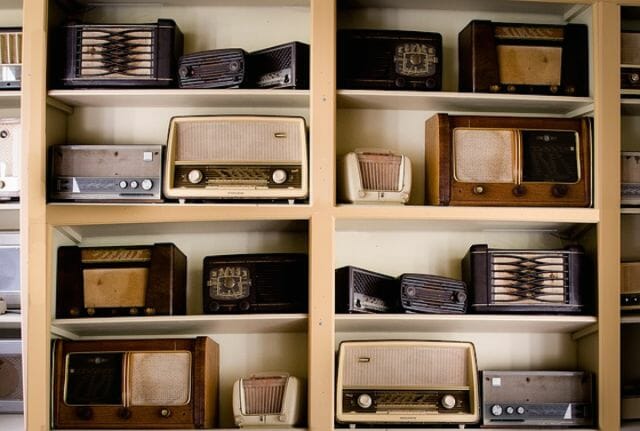 Traditional radio caters to local audiences. After all, a radio signal can only travel so far; it better be interesting to the people who live near the transmission tower. Because of this technical constraint, the popularity of particular radio formats are a particularly strong reflection of geographically specific culture and interests.

Given this, we were curious about what the success of certain radio formats — the categories of content stations specialize in — could tell us about cities and regions across America. Which genres are most popular in different cities?  Which city has the most NPR listeners? Where are the bastions of country? The best cities for news? Sports talk? “Urban” radio?

Though internet and satellite radio are growing in popularity, local radio (also called “terrestrial radio”) accounts for about 80% of the market. Local radio is impressively quick to react to the demands of the market. Radio conglomerates like iHeartMedia will mercilessly change the format of a station when local tastes evolve.

The responsiveness of local radio to local consumer demand makes the ratings of local stations a fun resource for exploring local American culture. For this exploration, we analyzed the June 2015 Nielsen ratings of radio stations in the 50 largest radio markets. These ratings reflect the share of radio listeners that, at any given time, are listening to that station.  If a station has a share of 10, then at any given time, 10% of all listeners in that market will be listening to that station.

This dataset includes over 1,300 radio stations, falling into 55 different formats. Not every station is included because some choose not have their ratings reported. This may lead to omissions and biases towards certain radio formats, but overall our findings are a strong reflection of listening preferences. 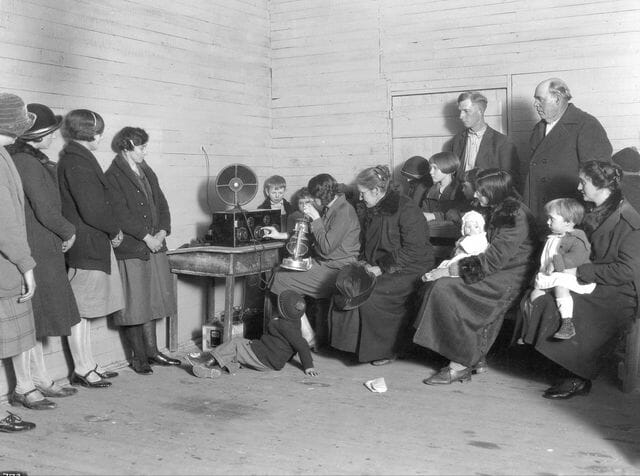 A radio listening session with Alabama farmers in 1926

The following chart displays the top format in each of the 50 largest radio markets. 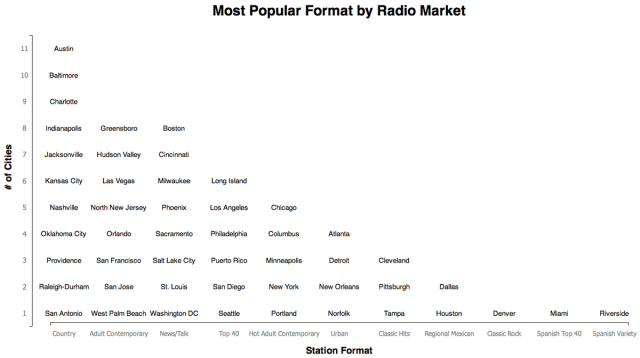 All Cities Considered: Where Is NPR Most Popular?

Since its establishment in 1970, NPR has become one of America’s most trusted news sources.  It has also become associated with a certain class of educated liberal, and is often mocked for its tone. Given its cultural associations, we were interested in finding out where there was the most demand for the likes of Terry Gross and Garrison Keillor.  The following table shows the ten cities in which NPR stations have the highest total ratings share. 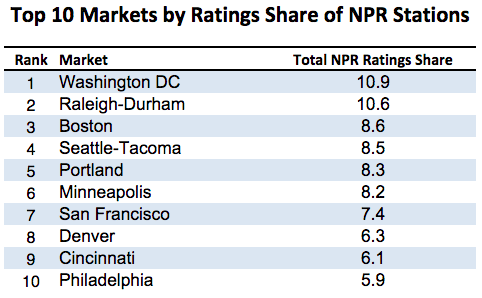 NPR’s headquarters are in Washington DC, and it is also the market in which their stations have the largest share. DC is followed by the higher-education saturated market of Raleigh-Durham — part of the “research triangle” — driven by the huge popularity of University of North Carolina run WUNC. Ray Magliozzi, of the show “Car Talk,” would be proud to see Boston sliding in at number 3.  And given the stereotypes about Pacific Northwesterners, it is no surprise that Portland and Seattle make the top five. 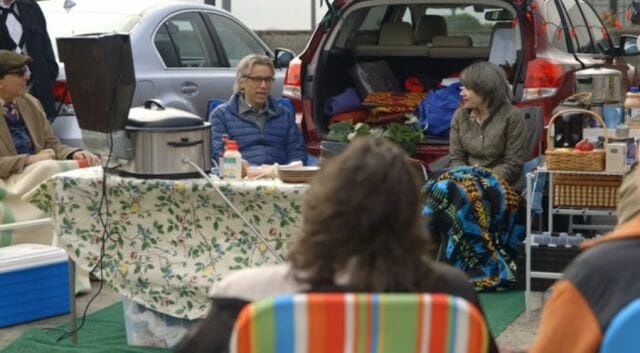 If instead of just looking at only NPR, we look at all stations that specialize in the “news” format, DC remains on top.  But the rest of the list changes substantially.  Milwaukee and St. Louis don’t appear in the NPR list, but on the more general “news” list, they shoot all the way into the top three. In both of those cities, CBS Radio-owned news stations are unusually highly rated. (CBS is NPR’s main competitor.) 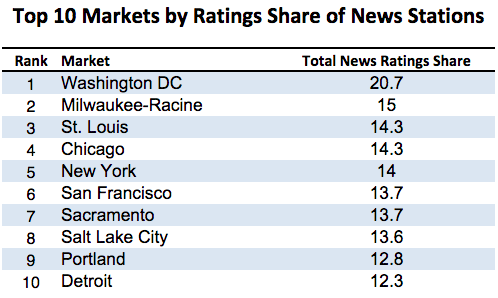 What Radio Tell Us About the Best Sports Towns

Sports fans like nothing better than to argue. Like all good sports arguments, the question of which city has the most numerous and most dedicated sports fans is, at best, obtuse and impossible to answer, but we thought we would add some quantitative evidence to the debate. This next table lists the top ten cities, ranked by sport’s radio’s share of the market. By this measure, the devoted sports town of Kansas City comes out on top, followed by Boston, which is also well-known as a city of sports obsessives.  San Francisco and San Jose come in fourth and fifth place, which is a bit of a surprise as they’re not traditionally known as sports towns. Perhaps the recent success of Bay Area basketball and baseball teams has earned listeners. Country radio is big in the South, but it’s big a lot of other places as well. Country is one of the ten most popular formats in 42 of the 50 largest radio markets, and it is the most popular format nationally.  As country radio has moved away from its roots and towards the “bro-country” that incorporates more pop and rock influences, its appeal seems to have broadened. This table shows the top ten cities by country station market share. 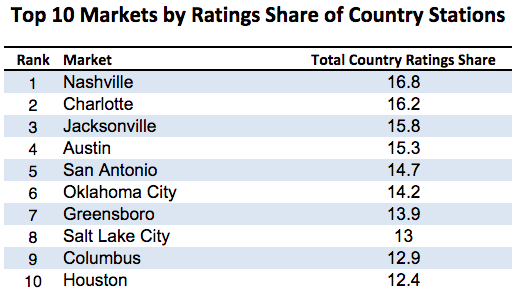 It appears that country radio still does best in the South. No where is this more true than in country’s spiritual home, Nashville, Tennessee. Nashville has 4 different popular country stations, one of which run by the venerable seat of country music, the Grand Ole Opry.  The only two non-Southern cities that made the list are Salt Lake City and Columbus, Ohio.

The Top Cities For “Urban” Radio

For some reason, the radio industry’s label for the R&B and Hip Hop format is “urban,” a classification scheme that many people find offensive. White and Latino artists like Robin Thicke, Pitbull and Iggy Azalea can be heard on “urban” stations, but the vast majority of the popular music on these stations is by African-American artists. 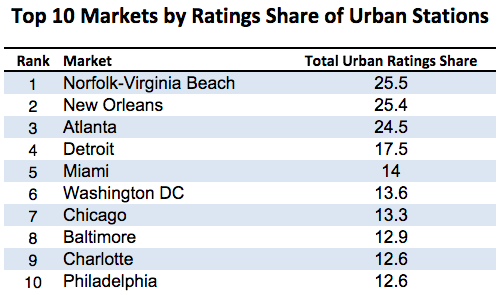 This list is primarily comprised of the Southern and East Coast cities with large African-American populations. In Norfolk-Virginia Beach, New Orleans, and Atlanta, “urban” radio stations take up a quarter of all radio listenership. “Urban” radio is proportionally more popular in New Orleans than country is in Nashville. The share of “urban” radio across the U.S. may be on the rise as programmers have found there is strong demand for the new format of “classic hip-hop,” which which emphasizes 1980s and 1990s artist like LL Cool J and Snoop Dogg.

Radio faces an uncertain future. With the increasing availability of internet on our phones, and more importantly, in cars, there might be less reason to make do with what’s on the dial. You can just throw on your “Rihanna” or your “Blake Shelton” radio station and just skip if you don’t get something you like.

But for the time being, radio continues to be an important part of many American’s lives and due to its local nature, a reflection of the diversity of regional listening habits.