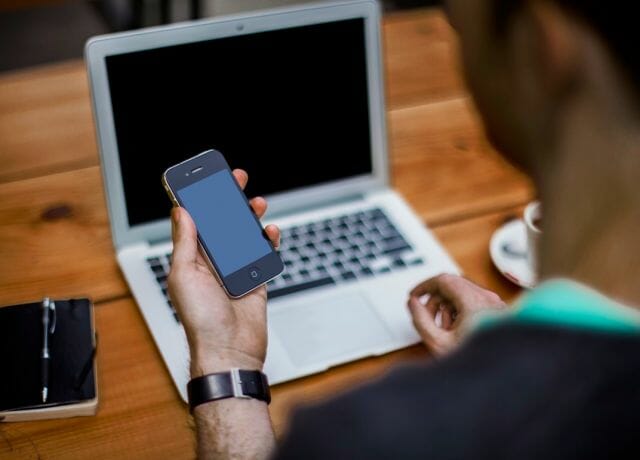 In 2004, the United States was quite a different place. The iPhone was three years from release, Barack Obama was a little known politician just elected to the Senate, the economy was growing at a rate of over 6%, and the TV show Desperate Housewives was a sensation. By 2014, seemingly much had changed. The 2008 crash had come and gone, Obama had become the nation’s first black president, and more than half of Americans had a smartphone.

But from a day to day to standpoint, how truly different were people’s lives? Did the economic, cultural and technological changes in that decade actually alter how we spend our time?

Each year, using what is called the American Time Use Survey, the U.S. government collects data on exactly how Americans spend their time. The results of the survey map out, with incredible detail, the exact number of minutes a representative sample of Americans spend on activities like sleeping, working, playing sports, and talking on the phone. By examining this data, we can get a sense of what Americans are doing over the course of an average day. The most recently released data is from 2014.

To understand how societal changes impacted everyday life over a decade-long span (2004 to 2014), we chose to look specifically at people in their twenties. In many ways, the twenties are the most adaptable group in terms of how they spend their time: The time of people younger than twenty is often dictated by parents, and the time of those in their 30s is often dictated by being a parent. Generally, people in their 20s spend time the way they want to spend it, and have less of a responsibility to the rest of the world.

Looking at people between the ages of 20 and 29, we found some expected outcomes (an increase in time spent playing games and using the Internet), but we also came across some changes we would not have presumed (a decrease in time spent watching TV and movies, a decrease in travelling and shopping, and an increase in sleeping). Below, we’ll explore these differences, as well as the changes in the world that might explain why they occurred. 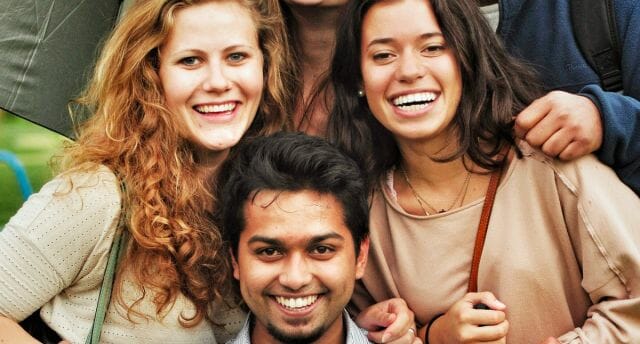 The time use of people in their twenties is most flexible to societal change.

The American Time Use Survey is a veritable treasure trove of data. Collected yearly since 2003 by the Bureau of Labour Statistics, the survey asks a sample of over 10,000 Americans how they spend their time. And they do it in incredible detail.

Respondents are asked for a minute-by-minute account of their previous day (making sure weekends and weekdays are equally accounted for). The time spent must add up to 1,440 minutes (24 hours) that make up the day. The responses are matched to one of 17 very general activity categories like traveling or eating and drinking, as well as 431 more specific activity categories, which fall under one of the 17 general categories, such as playing volleyball or building and repairing furniture.

For example, we can look at the survey responses from one 27 year old woman interviewed in 2004 who claimed to spend the 510 minutes of the previous day sleeping, 60 minutes washing and dressing, 60 minutes preparing food, 5 minutes doing some financial management, 30 minutes checking email, and 390 minutes watching television or movies. And those of a 23 year old man, who went for a 90 minute run on a Sunday in 2014, after sleeping 12 hours the night before.

By averaging out the responses of thousands of individuals from 2004 and 2014, we can get a feel for how how Americans’ time use — as well as the country itself — has changed.

A General View of How People in Their Twenties Spend Time

It’s helpful to begin by breaking down Americans’ time into seventeen very general categories. The table below shows the number of minutes spent on an activity category by people in their twenties in 2004 and then by that same age group in 2014. These estimates are based on a sample, and are generally accurate to within two minutes or less. 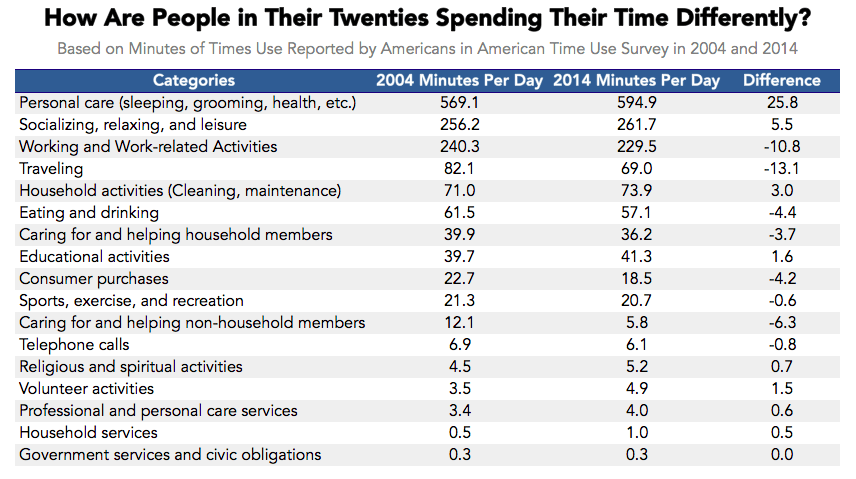 Among the biggest changes are the increased number of minutes spent on personal care. This is mostly accounted for by the increasing minutes that people report sleeping. In 2014, Americans in their 20s reported sleeping 556 minutes per day, up from 545 in 2004. This may seem like an incredible amount of sleep to some of us, but these amounts are corroborated by many years of Bureau of Labor Statistics data.

The increase in sleep for people in their twenties is actually quite similar to the increase for the population in general. Including all Americans 15 and older, the number of minutes slept per night went up from 522 minutes in 2004 to 533 minutes in 2014.

Researchers are somewhat perplexed at this increase. Diane Lauderdale, an epidemiology professor at University of Chicago, demonstrates this increase is not due to increased unemployment, and wonders whether this is simply a response to “tremendous amount of scientific and media coverage” around the need to get more sleep.

How Does Employment Impact Time Use?

People in their twenties reported spending an average of 11 minutes less working in 2014 than in 2004. This is almost entirely because of the substantially lower levels of employment faced by people in their twenties between those years: while about 23.0% of respondents were not employed in 2004, approximately 26.1% of respondents were not employed in 2014 (this difference is not attributable to people being in school).

If employed in 2014, the time spent working was the same as it was in 2004: 313 minutes a day. The table below displays the differences for the seventeen broad categories displayed in the first table, but this time, only for those who are employed full-time. 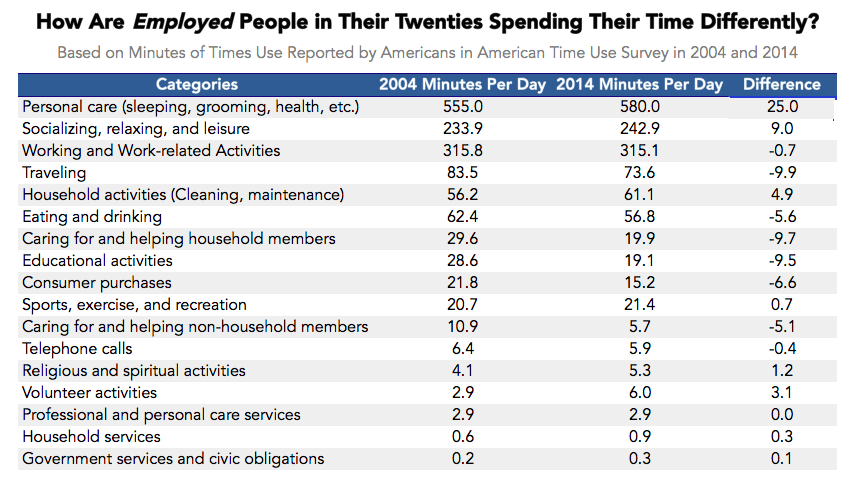 Not all the discrepancies in time use go away if we only look at those who were employed. The differences in sleep, socializing and travel, among others, remain consistent.

There are four major areas where time use has decreased for both the employed and unemployed: traveling, consumer purchases, eating and drinking, and caring for household members.

The decreases in time spent on travelling and consumer purchases may, in large part, have to do with the rising importance of the Internet. People are less likely to need to travel for work and shopping because they are able to complete many more tasks from the comfort of a computer screen. Although people of all ages have saved time on travel and consumer purchases, it is particularly pronounced among Internet-savvy twentysomethings, who have saved double the amount of time on these activities as people over the age of 50.

The reduced amount of time expended caring for a household member — from nearly thirty minutes to less than twenty minutes — is related to the lower likelihood of an individual in their twenties having children today: 33% of survey respondents in 2004 had children, but only 28% had children in 2014.

The decrease in time spent eating and drinking is a curious one. Though people are spending three minutes less on this activity, they are actually spending more time dedicated to food in general. This is because the average person is now spending seven more minutes a day on food preparation and clean up:

This data is among growing evidence that after years of cooking less, young Americans seem to be returning to the kitchen. Or at least to the microwave.

The Decline of TV Watching

There is another activity that the twentysomethings of 2014 are doing quite a bit less than their predecessors. Although socializing, relaxing and leisure is increasing as a category, the specific activity of watching television and moviesis on an impressive decline — even as TV and movie watching is increasing for the rest of the population. 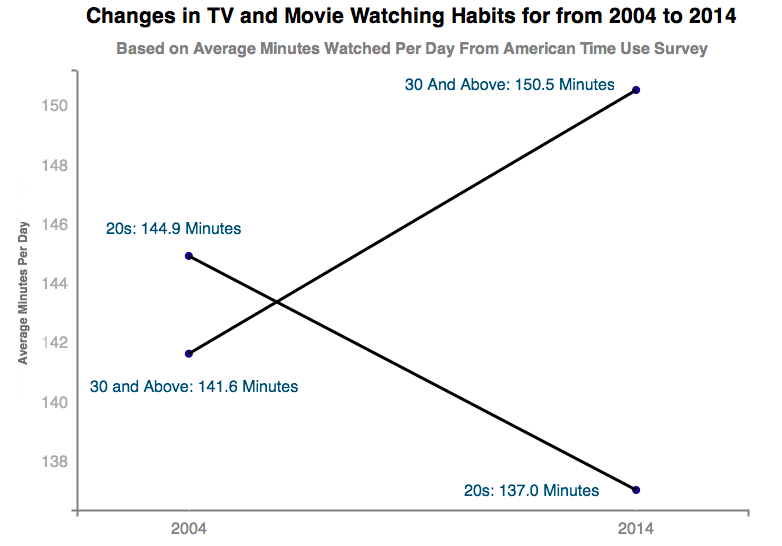 Activities on the Rise

With the time saved from less travelling, shopping, eating, watching TV and caring for others, those in their twenties had more time for activities (besides just sleeping more). The activities they chose to engage in are not a huge surprise.

People in their twenties in 2014 were more likely spend time playing games (including on mobile), using their computer for leisure (like looking at Facebook), and reading for pleasure. 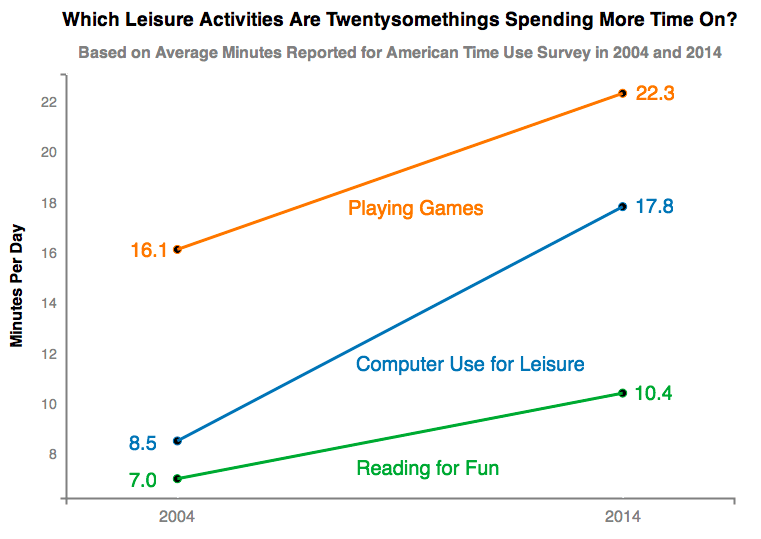 The increase of reading for pleasure may be a surprise. The effect is small, but could be a result of the time people now spend reading articles sent to them on Facebook, rather than watching TV. A Pew Research Center Study also suggests young people are the most likely to be reading books, perhaps in part because of the popularity of young adult (YA) fiction.

For all the changes that we observed over the past decade, much has also stayed the same. Twentysomethings are spending similar amounts of time on exercise, household maintenance, and education. And even in areas like sleep, where there has been a change, it’s not an amount that fundamentally changed this group’s life.

For the areas that have seen large movement in time use, like travel, shopping and playing games, it seems like the main catalyst for that change has been the Internet. While the Internet was a part of many young Americans’ lives in  2004, it was not nearly as pervasive as it is today. Smartphone ownership was uncommon, and the vast majority of young people did not use social media. It seems that the attractions and conveniences of the internet age will have substantial impact on how we use that most precious of resources: time.

Our next post we explores why being buried in space isn’t such a bad deal. To get notified when we post it →  join our email list.