Say “Hello” to the Era of the One-Word Song Title This post is written by Dan Kopf, Priceonomics Staff Writer

Over the last several years, pop music has been inundated by massive hits with one-word song titles: “Happy”, “Fancy”, “Rude”, “Problem”, “Jealous”, “Chandelier, “Hello”,  and “Sorry” are just a few examples of this trend.

We are in the era of the shrinking pop song title. The transition has taken place slow enough that you may not have noticed, but when you look back at the history of pop, the change is stark.

We analyzed Billboard Hot 100 song title data and discovered a steady upward trend in the number of one-word titles. Today, the probability of a one-word title is two and a half times greater than in the 1960s. The average number of words per song title has also declined substantially. The increasingly industrialized pop machine likes its song titles short, sweet and on brand.

The following chart shows the proportion of Billboard 100 Hits with a one-word title in each decade since the 1960s. 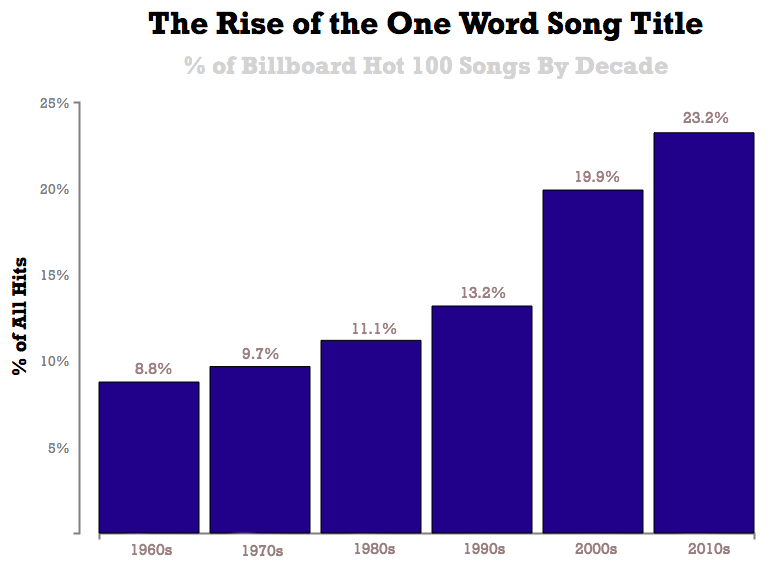 There have always been songs with one-word titles, but in the first half of the 20th Century, they were uncommon. If you peek at lists of popular songs from the 1920s and 1930s, you’ll find that one-word song titles are exceedingly rare – hits like Jimmy Dorsey’s Tangerine and Billie Holiday’s version of Summertime are exceptions.

By the 1960s, one-word song titles were more popular, but still unusual, at less than one in ten hits. The growth was relatively gradual from the 60s to the 90s, and then accelerated at the turn of the century (more on why this might be later). 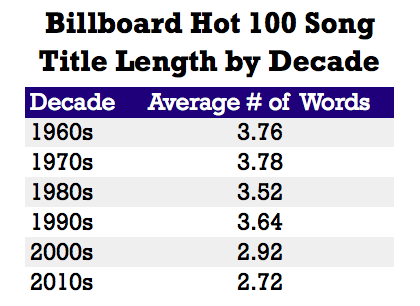 So just what the heck is going on?

We can’t be sure, but it is probably no accident that the shrinking of the song title coincided with the rising importance of single sales. In the 1990s, CD album sales made up over 90% of music sales revenues in the United States. Due to the emergence of the Internet, that percentage has decreased to less than 50%, mostly replaced by digital downloads and streams of singles.

With the single replacing the album as the most important commodity in popular music over the last twenty years, the music industry has become exacting about improving the chances of a song’s commercial success. In his book, The Song Machine: Inside the Hit Factory, New Yorker writer John Seabrook details many of these changes: the increasing division of labor in songwriting, the rise of computer-processed voices, the use of synthetic sounds at the expense of live instrumentation, and the emphasis on the first seven seconds of a song to make sure listeners don’t lose attention. Perhaps we can add the shrinking of the song title to this list.

Why might shorter song titles be better commercially? Mostly because they are easier to remember, particularly if they are repeated over and over in the song. The last thing the music industry wants is for you to love a song but be unable to remember its name when you go to stream or download the song. But it’s tough to forget “Hello” or “Happy” when Adele and Pharrell keep repeating the one-word title throughout the song.

In the course of an interview about the death of the chorusless pop song, the music critic and chart analyst Chris Molanphy considered the growing market orientation of the pop song title: “Branding has gotten harder and faster,” he explains. “We’re increasingly moving away from the days of the bizarre title that has nothing to do whatsoever with the refrain of the song.”

If our hypothesis that commodification led to the shortening song title is correct, then we would expect to see even shorter titles at the very top of the charts. And that is just what we found. The following chart shows the trend in single word song titles over time for songs that reached the top 20—and songs that did not. 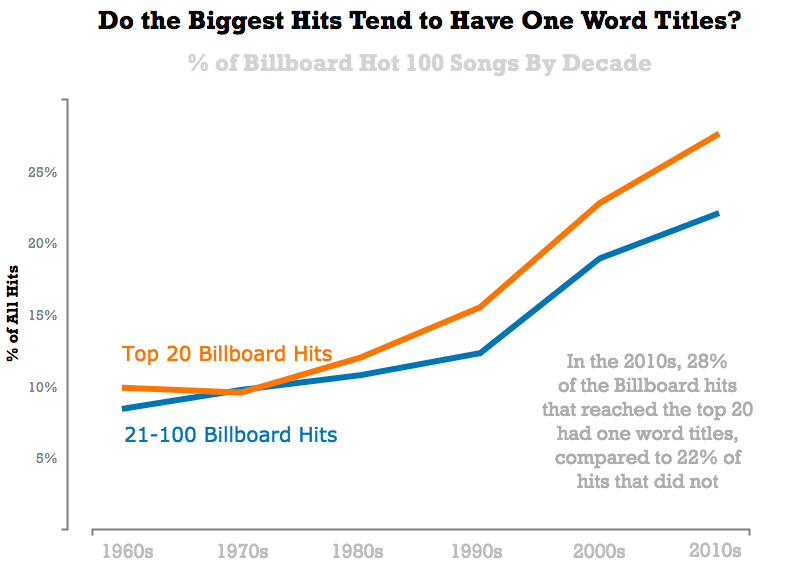 Perhaps no artist is more representative of the trend towards economical song titles than Justin Bieber. His most recent album, Purpose, contains thirteen songs with titles averaging 2.3 words. Four of his songs have one-word titles – “Sorry”, “Company”, “Children”, and “Purpose”. The Beatles were rarely so pithy. We compared the song titles of the Beatles’ album Meet the Beatles to Purpose – albums from similar stages in the acts’ careers – and found a stark difference in the approach to titling songs. 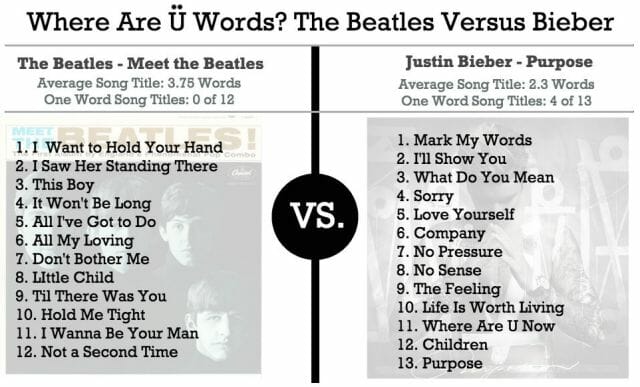 Bieber is not alone among modern pop stars in terms of song title concision. We analyzed the average number of words per song title for the Billboard Hits of the 40 acts with the most hits since 1960. At the very top of the list are three contemporary pop stars – with Drake just edging out Taylor Swift for the number one spot. 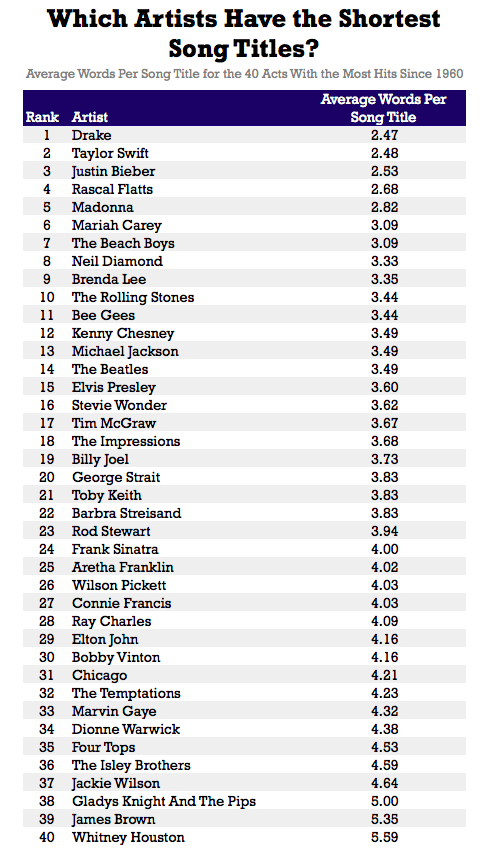 Pop music is a multibillion dollar industry that pervades American life: we hear it played in cars, at malls and sporting events, and during weddings and TV commercials. The pop industrial complex is focused on making the consumption of its product as easy as possible, and that has meant making song titles ever more simple and memorable. Expect to hear a lot more one-word title hit songs with lyrics that will drill that title into your head.

Our next post looks at consequences of the Cordon Bleu licensing its name to expensive, scandal-ridden cooking schools in the United States. To get notified when we post it →  join our email list.