The Economics of Pawn Shops 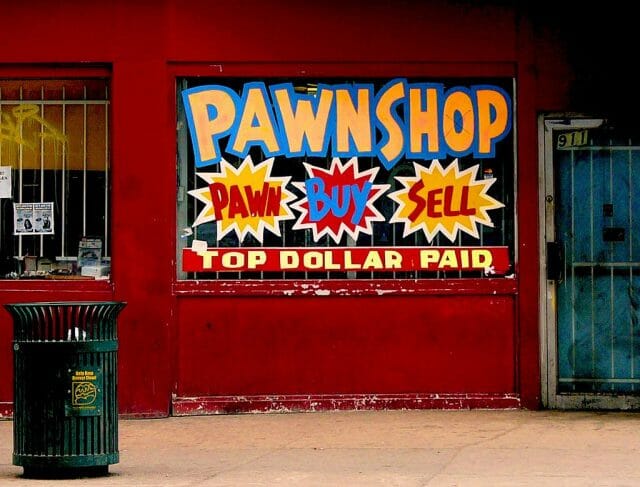 This guest post is adapted from the blog of PawnGuru

Imagine that you take a gold ring to a pawn shop. You need some cash, and the employee at the register says that he’ll loan you $35 if you pawn it. Should you do it? Or should you try another shop?

Last year, we visited eight Detroit pawn shops with a violin, an iPad, a gold ring, and a diamond ring. Our goal was to answer this question. We wanted to see whether pawn shops offered similar prices, or if people should shop their items around.

We discovered huge disparities. Items that one pawn shop offered hundreds of dollars for were valued under $100 by others, or didn’t even get an offer.

This experience led us to found PawnGuru, a website where people can connect with multiple pawn shops, and we now have data from thousands of pawn shop bids and transactions. It confirms what we experienced during our visits to pawn shops in Detroit: Pawn shops offer wildly different prices.

When we went around Detroit last year, trying to pawn a few items, we experienced firsthand the different prices that pawn shops offer—even for common items.

When we tried to pawn a diamond ring, the offers from different stores ranged from $65 to $1,060. 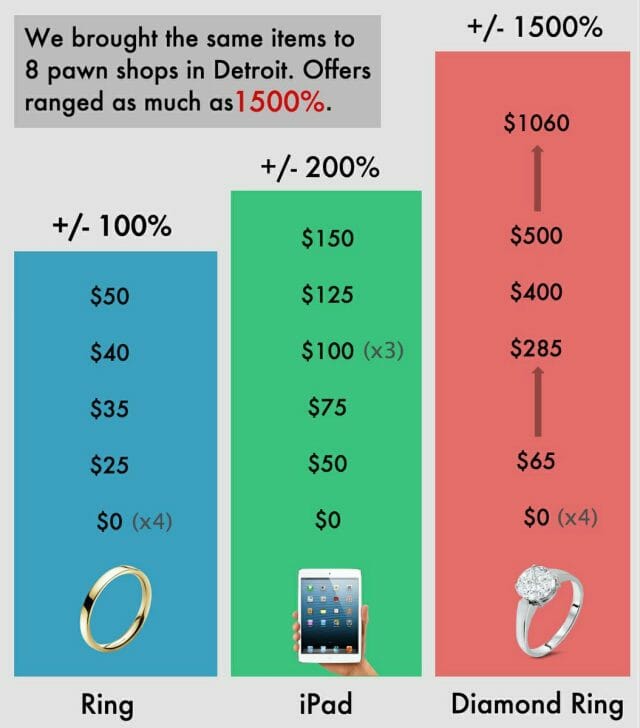 These pawn shops were offering us loans for pawning items—not trying to buy the items. But they offered the loans at the same interest rates for the same length of time, so that can’t explain the price differences. And these pawn shops were all located within a 15-minute drive from each other.

Our experience with PawnGuru shows that these price disparities are typical in the industry.

Since July 2014, when we first drove from pawn shop to pawn shop, we’ve helped about 18,000 people pawn, sell, or buy more than 24,000 items on PawnGuru. On PawnGuru, customers post items they want to sell, pawn, or buy, usually from their phones. Then pawn shops respond to these requests online, so consumers receive multiple offers. We’ve also added a chat window, where the two parties can talk and negotiate.

We can illustrate just how much pawn shop offers differ by looking at a representative dataset from those conversations. This chart uses our data to show how much variance existed over the past 12 months: 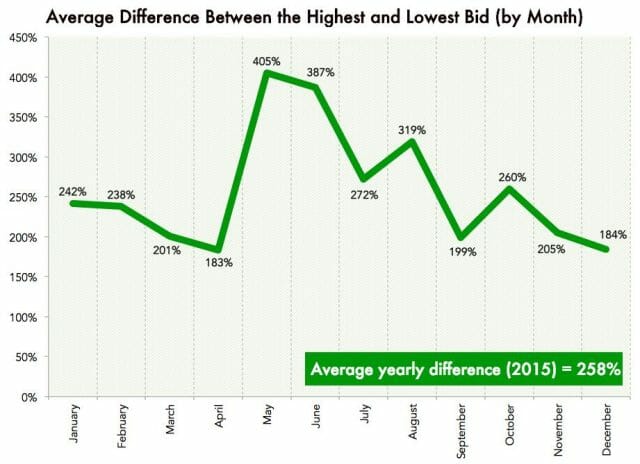 The higher the percentage, the bigger the difference between the highest and lowest bids.

This data includes bids on both pawned items and sold items, which showed about equal variability on a percentage basis. For pawned items, we only included loans with the same interest rate and length of loans, so differences about the loans can’t explain the different amount of cash offered.

The average spread for 2015 came out to 258%, which is very close to what we saw when we went door to door in Detroit.

But some types of items experience more price variability than others. The below chart shows the variability of prices for different categories: 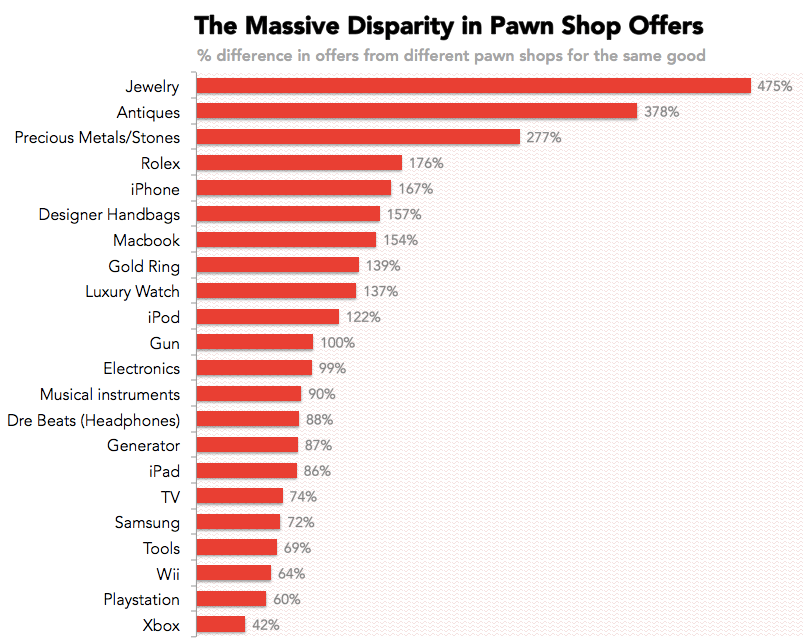 Jewelry has the largest spread, while video game consoles have the smallest spread. But even for video games, the spread is significant: around 50%.

So why do pawn shops offer vastly different amounts of money for exactly the same item?

Early on during the process of building PawnGuru, pawn shops told us they were seeing items that didn’t interest them. So we added item filters.

We also asked them why they didn’t want certain items, and we learned that many pawn shops specialize in specific items. Some cities, for example, have a store or two that move TVs faster than anyone else.

Specialized stores are often responsible for the highest bids. These pawn shops can move inventory effectively in store, or have an effective presence selling it on eBay. Since their products don’t take up valuable shelf and storage space and tie up their capital, they’ll offer more for those products. They’ll also sell that product at a higher price.

Specialization also explains low bids or a lack of interest from pawn shops when they see items outside their specialty. Roughly 20% of the pawn shops in our network ignore designer clothes and handbags, and some pawn shops won’t accept smartphones. Or they make very small offers on them, especially iPhones.

This is both a matter of pawn shops’ ability to quickly and profitably resell items (a store known for jewelry can’t sell electronics as quickly or at as high a price) and a matter of product knowledge. Not everyone knows how to tell whether a Tag Heuer watch is real or not. Preparing a phone to be resold, particularly an iPhone, requires knowing how to remove personalization software like iCloud. Not all pawn shops know how to do it. Or they don’t want to take the time to learn. 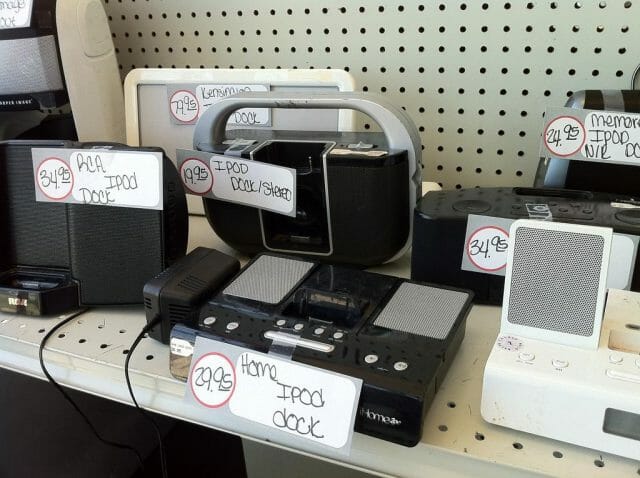 iPod speakers on display at a pawn shop. Photo by Wesley Fryer

By speaking with many different pawnbrokers, we discovered another reason for disparities in pawn shop offers: They have different desired profit margins.

Pawn shops that seek lower margins generally have lower overhead – they’re leaner businesses. In addition, pawn shops that do a high number of transactions per month can also offer more up front, making up for the smaller profit margin with greater volume. But they all come to the negotiating table with their margins in mind.

The final factor is access to capital. Some pawn shops are self-funded, while others take outside investors. But all of them are constrained by how much money they have to lend. As a pawn shop’s available capital declines, so does its ability to make competitive offers. This can result in fewer offers, smaller offers, or both. So whether a pawn shop offers you a good price for an iPad may depend on whether the shop has lent out most of its capital already.

According to the National PawnBrokers Association, 30 million Americans routinely rely on pawn shops. Since most pawn shop customers are unbanked or underbanked, pawn shops are one of the few ways they can borrow money.

But for such a large industry—American pawn shops make nearly $15 billion in revenue each year—there’s very little transparency. For many customers, the difference between the highest and lowest bids we’ve seen for pawned items could be the difference between keeping the lights on and not being able to pay the electric bill.

It’s increasingly common to use a smartphone or laptop to conduct research before buying or selling an item. Why should the pawn world be any different?