The Man Who Sees Art in Cheetos 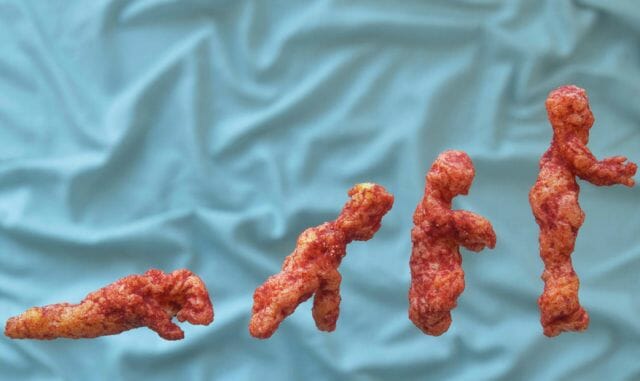 “The Evolution of Man”

By day, Andy Huot is a mechanical engineer — one that designs “the equipment used to build aircraft parts.” He’s an intelligent man who choose his words wisely and provides straightforward answers. Goal-oriented and focused, he is rarely derailed by distractions.

By night, he creates art with Cheetos.

Over the past year, the Louisville, Kentucky man has spent hours dipping his hands into greasy bags, examining each puffed corn nugget with the shrewd intensity of a museum curator, and posting his unaltered findings on Instagram. Today, he has more than 40,000 followers from all around the world.

It’s been an unlikely journey for Huot — a journey of cheese-encrusted fingers, humor, and sadness — and it all began with a Sasquatch-shaped Cheeto.

Last October, while working on an engineering-related invention at home, Huot got hungry. But he was so into his project, that he didn’t want to stop and make himself anything to eat. He needed something quick, something he could munch on while tinkering.

“I’d bought some grocery store brand cheese curls, and I just started eating them,” he tells us. “My creative mind was going at the time, and I was…I was able to see shapes in the cheetos.”

Amused, he whipped out his phone and took a dozen photos of various humanoid cheese curls. When he showed them to his friends and family members, they were thoroughly amused. I wonder what I can do with this? he asked himself.

His little brother had an answer. “Dude,” he said, “Instagram.”

With his brother’s help, Huot created Cheese Curls of Instagram, an account entirely composed of “pictures of Cheetos that resemble things.” Expecting a minimal to non-existent response, he posted his first photo — Sasquatch: The torrent of support was like nothing he had ever experienced. Within hours, the Sasquatch Cheeto “blew up:” dozens of people left words of high praise, “likes” poured in like a Texas flood, and Huot began to accrue followers at a rate of 150 per day — “all organically,” he says.

“I didn’t expect that response,” he admits. “It motivated me to keep going, to try harder.”

And that he did.

Over the ensuing three months, Huot posted 40 more images, each escalating in both popularity and complexity. Whereas his early Cheeto visions were a bit simpler (ie. “Cat”, “Hammerhead Shark”, “The Number Seven”), he began to take bigger risks.

Take, for instance, “Interpreter and Guide for The Lewis and Clark Expedition, Sacagawea, Nods Her Head as She Holds Her Baby, Jean Baptiste Charbonneau”: 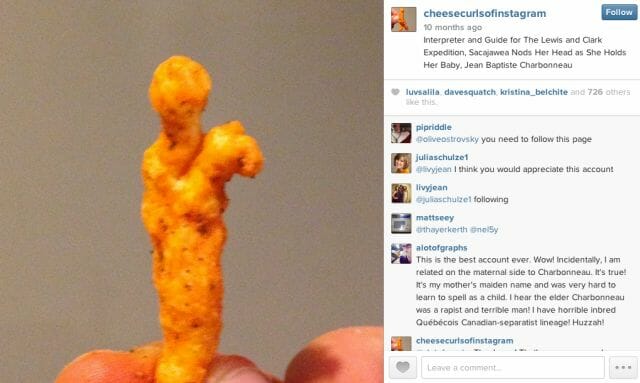 By the end of 2013, Huot had amassed a considerable, very devout following. “You’ve inspired me,” wrote one fan, “seriously — this is the most unique and epic page on Instagram.”

Huot’s success didn’t come without criticism: Many commenters were dissatisfied with his “un-manicured” fingernails and “cheesy fingers.” By January, he began using tweezers to hold up his treats instead. But Huot, an ever-crafty engineer, wasn’t satisfied with his methodology — so he pioneered what is perhaps the most complex photography rig ever used to photograph a Cheeto: 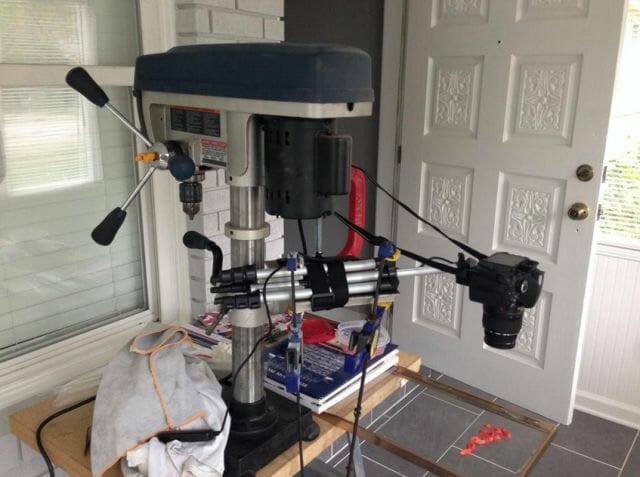 Speaking quickly and with excitement, he elaborates:

“I took a steel frame workbench with a wooden top, and bolted a drill press to it. On the plate is clamped a tripod, which supports the camera. I can raise and lower the camera by cranking the drill press up and down, and I can swivel it at whatever angle I need.

Then, I have this picture frame — a long, skinny picture frame with non-glare glass — protruding from the table like a diving board. That’s where the Cheetos go. Underneath the glass, on the floor, I draped this bed sheet, you know — to give it some texture.”

Huot set up the rig in his son’s room, where the natural light hit the Cheetos just right.

Even with the elaborate set-up, Huot encountered issues. “When I started taking the high quality pictures, there were two reflection problems,” he says: “The camera seeing itself, and the Cheeto reflecting its orange light off the glass — like a halo.”

To reduce glare, Huot enlisted a “circular polarizing filter” and wrapped his camera in a towel. The Cheetos’ luminous glare was no more.

“The things I’ve had to do to get these Cheetos to look like they’re floating,” he admits, “are pretty crazy.” 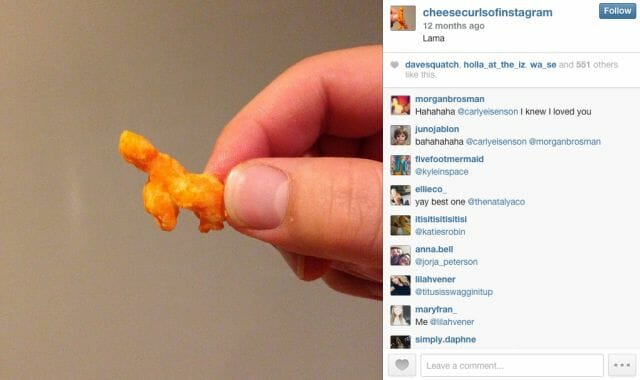 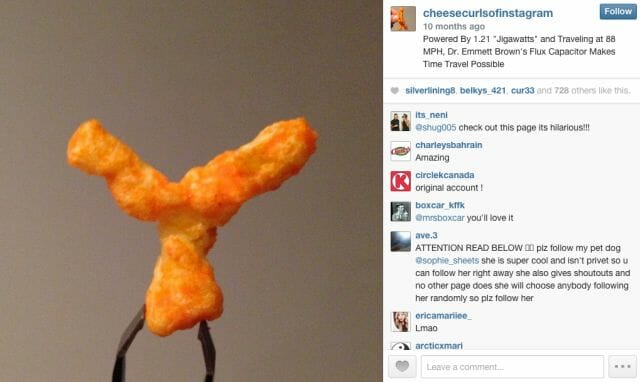 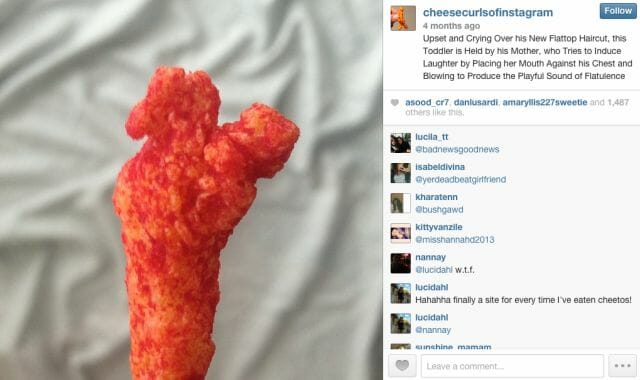 Curating Cheetos has slowly eaten up Huot’s free time. The actual time he spends on Instagram is modest — 5 to 10 minutes in the morning, and 20 minutes at night — but his process of discovery is a bit more consuming.

Typically, he works an extra 30 minutes Monday through Thursday to allow himself a half-day every Friday — a day he uses to sift through the Cheetos. “First of all, I have to be eating them,” Huot clarifies. “I can’t just open a bag and look for good ones. It just doesn’t work.”

He’ll pop open a bag, and remove each cheesy nugget, slowly examining it “from all angles;” if he finds it to be visually unstimulating, he eats it.

When Huot first began, all of his Cheetos were of the jalapeno-cheddar variety. But after eating a bag a week for a few months straight, he grew weary of the flavor and switched to “flaming hot.”

“I found with the flaming hot ones, the shapes were much more pronounced,” he reveals. “I don’t know if they cook them differently or what, but something about those — the shapes are just much more interesting.”

He’s also not above using (and eating) the generic, store-bought brands — though he clarifies that they’re not ideal for creating works of art. “The problem with off-brands is they don’t have quality control,” he clarifies. “They don’t dust the coating as evenly. It’s kind of distracting.” Nonetheless, he admits they’ve yielded “some true gems” in the past. After all, it was in the depths of one of these bags that he “discovered” the bust of Mark Twain: 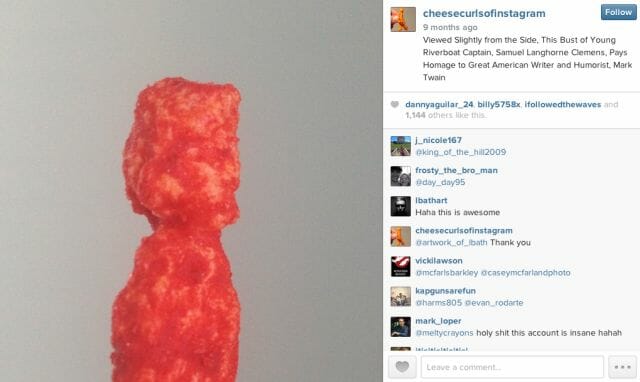 Regardless of the brand or flavor he uses, Huot says he finds “at least one shape in every bag” — sometimes, as many as four or five. And really, that’s just a testament to his creative eye.

When he finds a “showcase” piece, he photographs it, then stores it in an airtight tackle box for safekeeping. Though he acknowledges that his art form is impermanent, he testifies that the Cheetos have surprising staying power. “I have some that are 8 month old and still perfectly fine,” he says. “It seems like they actually gain strength over time — they take on moisture and get so stale that they’re no longer brittle any more.”

Recently, after being featured as an Instagram “suggested user” and amassing more than 40,000 followers, Huot decided it was time to take his art to the next level.

Three weeks ago, he set up an Etsy account, through which he offers “very high-quality” prints of his creations for $20 to $25 each. It’s a monetary amount that pales in comparison to the number of hours he invests in both finding the shapes, and photographing them. His first professional print, “The Execution-Style Killing of a Man for Being Different,” took him nearly two weeks to produce. 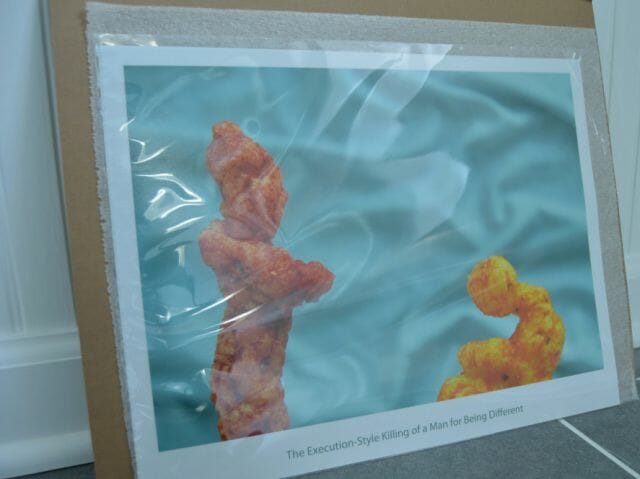 “If someone requested them, I’d also consider selling the actual Cheetos,” says Huot

Huot’s ultimate goal through Etsy is twofold: to spread the humor and beauty of his art, and, more practically, to help fund his upcoming wedding.

“I haven’t sold anything yet,” he admits. “I’m new to Etsy, so I’m not sure how to master it — the SEO and everything. But also, I think people just don’t know what it is.” 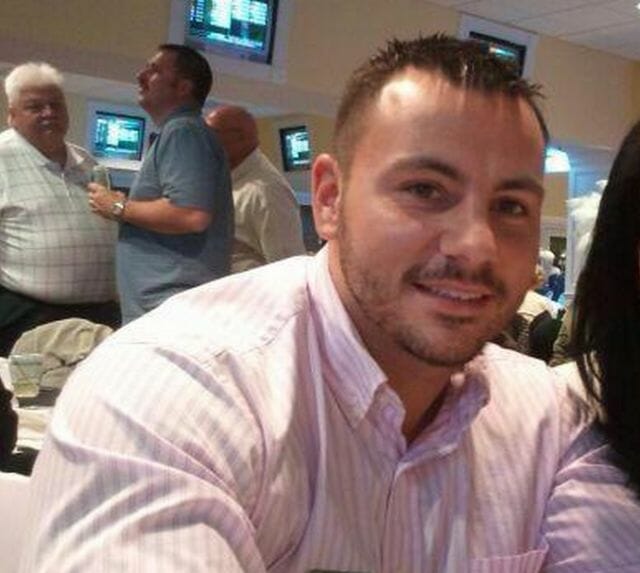 Though Huot is a pragmatic engineer, he’s always possessed the imagination of a fine artist.

“When I was in high school, my art teacher wanted me to go to some big art school,” Huot recalls wistfully, “but I never pursued it because I always liked to build things too — and I thought engineering was more lucrative.”

Cheetos reawakened Huot’s creative soul. They reinvigorated his artistic passion, gave him an intense, cheese-coated purpose. To him, the lumpy cheese snacks are undoubtedly an art form:

“I think art is something that you don’t see every day. You look at it and it makes you feel something. It induces emotions. Sometimes, it also makes you wonder what the hell is going on.”

But it’s also a medium that’s come with its fare share of doubts. “Sometimes I think, you know, ‘What am I doing? Why am I wasting my time with this?”” he admits. “But when I read the comments, I realize it’s all worth it.”

“It’s easy to think of this as a big joke,” he adds, “but there’s something magical in bringing Cheetos to life.”

To see more of Andy Huot’s Cheeto masterpieces, check out his Etsy and Instagram.