Who Makes Below Minimum Wage in the Mechanical Turk Sweatshop? 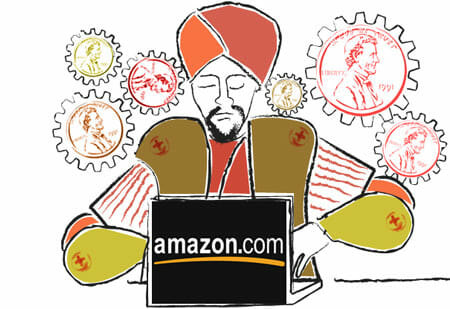 The wages offered on Mechanical Turk do not seem very enticing. Three cents for copying the product codes and prices from a digital receipt. Five cents for identifying a series of images as adult content. $1.13 for writing a verbatim transcript of a 4 minute and 2 second audio clip.

Mechanical Turk is a service of Amazon.com named after “The Turk,” a chess playing machine that toured Europe in the 18th century and defeated men like Napoleon Bonaparte and Benjamin Franklin. In fact, it was not a machine at all. A chess master concealed within controlled the machine.

Amazon’s service allows employers to crowdsource the fulfillment of very simple tasks. The idea is that the tasks, which require a human to perform them rather than an algorithms, can be performed as if by a machine. Workers anywhere in the world can browse and choose tasks to fulfill. All they need is an Internet connection.

Although the wages listed below are for tasks that can take under a minute, the average hourly “wage” of someone earning money on Mechanical Turk is $1-$5. Roughly half of the Mechanical Turk workforce is American, which means that they are working for less than the Federal minimum wage of $7.25 per hour. Since the workers are considered independent contractors, they are not covered by most labor laws.

This has led to a debate on the legal and ethical status of the Mechanical Turk system. Some argue for the service since people are voluntarily choosing the work. They also note that these wages can be quite good in countries like India where Mechanical Turk is used. Most writing on the subject disagree. A contributor the New York Times economics blog has called for labor protections. Enthusiasts of technology like professor George Williams have questioned the low wages. A Newsweek Article described services like Mechanical Turk as having merit, but looking a lot like high-tech sweatshops.

But the demographics of Mechanical Turk workers defies the sweatshop image.

A survey of workers on Mechanical Turk done by Panos Ipeirotis, an Associate Professor at the Stern School of Business at NYU, found that the majority of American workers are young, have at least some college experience, and have household incomes between $25,000 and $60,000.

A minority of American workers (just over 10%) spend over 20 hours a week on Mechanical Turk – a number that correlates with the percentage of people who say that the service is their primary income. Around 30% of Turk workers use it because they are unemployed or underemployed. Certainly these workers would appreciate better wages and protections.

The rest make under $20 a week by working an hour or two per day. The most commonly cited reasons for using Mechanical Turk are to earn some extra spending money and productively use time that would otherwise be wasted watching television. One academic study that relied on Mechanical Turk workers filling out questionnaires noted that its American participants were “normally distributed in terms of socioeconomic status, with the average participant having completed some college and receiving a financial income between $37,500–49,999 per year.” This does not match up with the perception of exploited sweatshop labor – the poor who must accept low wages due to a lack of alternatives.

The users of Mechanical Turk are still early adopters, which explains why so many workers are closer to the median US household income of around $50,000 than to the poverty line. As commentators have pointed out, it’s unclear how labor laws would be applied to Mechanical Turk. How do you define a minimum wage when the workers come from all parts of the globe? But regardless, fears of widespread flouting of American labor laws seem unfounded. Foreigners in countries like India, with lower wages, are increasingly finding the site and making up a larger percentage of the work force. So over time, the service will look more like classic outsourcing (with all the relevant pros and cons).

Until then, however, Mechanical Turk seems to be allowing Americans to compete in the type of work that is normally a prime candidate for outsourcing to foreigners anyway. It’s just surprising which Americans choose to do so.