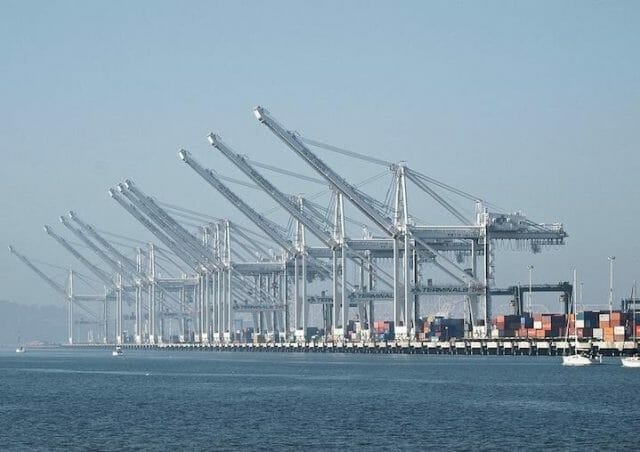 This post is an adapted excerpt from the blog of Flexport, a Priceonomics customer.

The massive cranes that sit at the Port of Oakland are veritable money-printing machines.

As ships coming from Asia dock in the San Francisco Bay, these industrial behemoths quickly usher goods-bearing containers off the deck and onto land. Modern container ships are filled with thousands of containers. At peak efficiency, a single crane can remove about 40 of these per hour — and for each one they unload, companies moving containerized cargo are charged a terminal handling fee of around $300.

But in many ways, the Port of Oakland, and most American ports in general, are some of the most technologically antiquated in the world. While many high-wage, developed countries have embraced and integrated automation in the process of moving shipping containers, Oakland has shied away from more technologically advanced solutions.

A port terminal recently opened in Rotterdam, in the Netherlands tells a different story: almost every part of the process of unloading containers is handled by software, and office workers remotely control the cranes over their computers. Some have called the operation the world’s most advanced container-ship terminal.

Comparing the ports of Oakland and Rotterdam shows just how far American ports are lagging when it comes to automation.

How Does a Container Port Work? 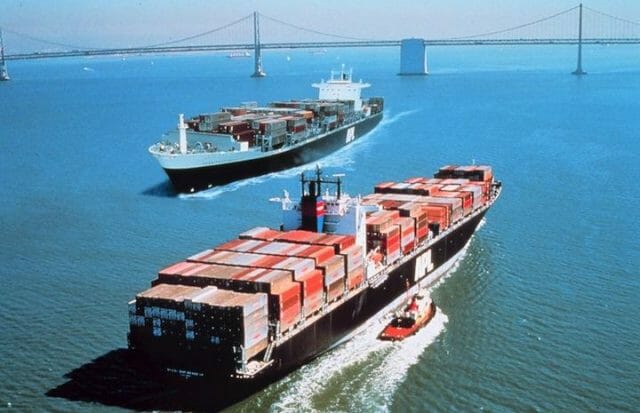 As many great articles and a highly-influential book have argued, containers are one of the great inventions of the modern world. In the shipping world,  a “container” is defined as a standardized 20, 40 or 45 foot long steel receptacle that houses any variety of goods.

These containers are a global ISO standard and work on essentially any ship, truck, or railcar that is fitted for them. This standardization, of course, alleviates concerns over how to pack a ship, what’s on it,  whether the goods will be stolen at the dock, or whether it fit on a certain truck or train. Containers let you treat the physical atoms of the world almost like computerized bits.

Typically, containers arrive via specialized ships at designated ports that have the particular equipment for unloading and loading the cargo as well as loading it onto trucks that can bring the goods to their destinations. The ports, and the level of efficiency with which they can process goods, have profoundly affected the global economy.

From the perspective of a ship coming into a port with containers and in the simplest terms, there a three critical pieces of technology: the “gantry cranes” that lift the containers from the ships, the transport vehicles that move the containers strategically around each port’s container yard to a designated delivery location, and the stacking cranes that pile up the containers so that trucks can come take them away. For exporters, who move containers from truck to ship, this process operates in reverse. 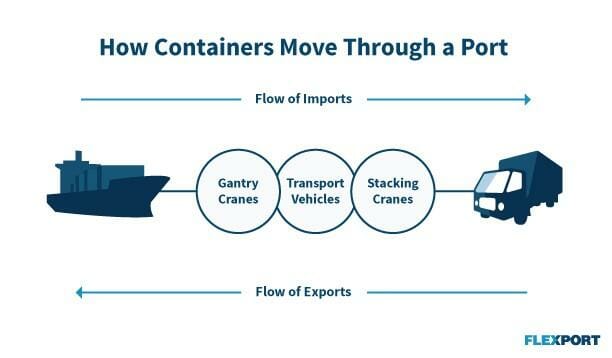 The machinery of these three components (gantry cranes, transport vehicles, and stacking cranes) can be operated either by humans or software. In Oakland, like most of the United States, all three are operated by humans. But the reality is that software automation can not only make this process faster and safer, but available at a lower variable cost.

While the process of automation hasn’t yet started in the Port of Oakland, Rotterdam began implementing port automation back in the 1990s. After investing hundreds of millions of dollars, Rotterdam’s port boasts an operation in which all stacking cranes that pile up the containers and transport vehicles are run by software. This is a far cry from Oakland, where every transport vehicle has a driver and each stack crane has multiple operators working in pairs for a single shift as well as dockman and clerks to help coordinate and direct the operators and vehicle flow within the container yard. 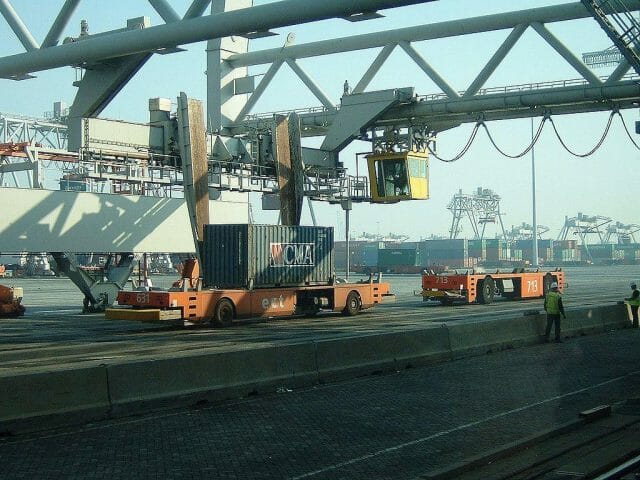 The most difficult part of the port to automate is the gantry crane, which plucks the container from the ship—partly due to the extreme potential danger involved. At most ports, before a container can be removed from a ship, a human must unlock the lower container lock; in a fully-automated system, there exists the omnipresent risk that a completely robotic gantry crane might not notice the human who unlocked the container.

However, many vessels have started to convert towards automatic locking and unlocking equipment that eliminates the need for a person to climb amongst the stacks of containers on a vessel and unlock containers before they are unloaded. In an automated system, humans would only need to interact with the equipment in this setting if there was a malfunction with the locking mechanism and bringing attention to a safety stoppage until the malfunction is addressed. Ultimately, this lends further support to the safety benefits to increased levels of automation.

In Oakland, teams of humans operate on-site gantry cranes. In the newest terminal at Rotterdam, however, a single person who operates this crane sits in an office and controls it the machine from his or her computer. A person is still operating the controls of the gantry crane, but that person now has software assisting him, making the job more comfortable, easier, and more productive. 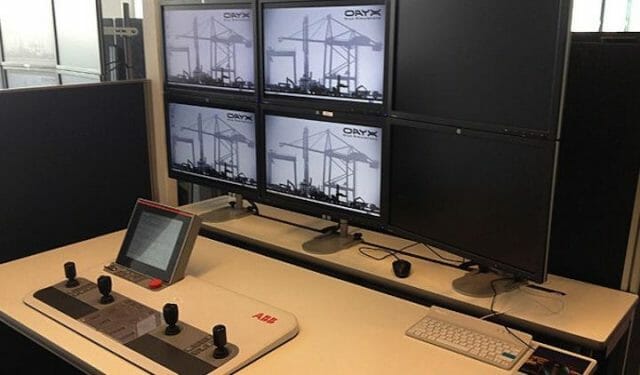 At a build cost of over $535 million, the Rotterdam port is now considered the most advanced in the world, with all three major parts of the container moving process automated. In Rotterdam’s other terminals, almost every single transport vehicle and stacking crane are fully automated.

It is difficult to make an apples to apples comparison of productivity between the two ports; due to the variables in the way in which they are structured, vessel size, vessel call schedules, shipping channel depth, gantry crane height and reach as well as limited public information for additional metrics. However, let’s take our best stab at figuring out just how much more efficient Rotterdam is than Oakland.

Rotterdam is the much larger port of the two, with 445 millions tons passing through it each year compared to just 47 million per year in Oakland. Much of this difference, however, is attributed to the fact that Rotterdam also accepts shipments of resources like oil that do not come in containers, whereas Oakland predominantly accepts containers.

Instead of gauging volumes, let’s start by looking at how many containers pass through Rotterdam versus Oakland. The industry metric for number of containers is the “TEU”, or “twenty-foot equivalent unit”. In the 2014 shipping year, 12.3 million TEUs passed through Rotterdam, compared to 2.4 million in Oakland. Naturally, there are more berths for ships and cranes in Rotterdam, so that doesn’t necessarily mean Rotterdam is more productive (it could simply just be bigger).

Publicly available data tells us that there are 36 gantry cranes in Oakland versus 103 in Rotterdam (note: this is pre-automated terminal, which is only just getting started, but will add 26 more cranes). To get our best estimate of productivity, let’s take a look at how many TEUs are processed by each of those cranes in Rotterdam (where most of the process is automated), versus in Oakland: 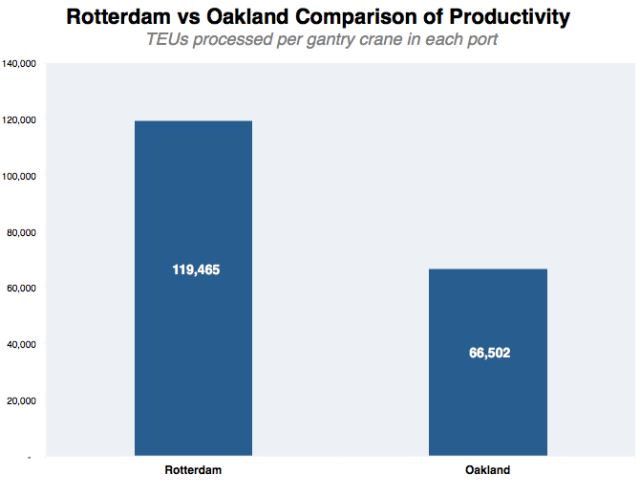 By this (admittedly rough) calculation, cranes in Rotterdam are almost 80% more productive than in Oakland.

Why Does Automation Make Things Faster?

It should go without saying that automation makes ports operate faster, but the exact reasons for this are less obvious.

First, and perhaps most importantly, high levels of automation make it easier to have multiple shifts per day and better utilize expensive capital assets (cranes, trucks, berths, etc). In Oakland, it’s extremely expensive to run a second shift to quickly unload a ship because it is necessary to pay employees overtime wages in order to do so. In Rotterdam, it’s much more the normal course of business to operate two or three shifts per 24 hour period, especially for container yard deliveries. All terminals in the Port of Oakland still run 1st, 2nd and 3rd shift operations as needed based on volume, it is just at much higher cost to both capital and human assets.

Human-operated and software-operated cranes, can, in theory, move containers at the same rate. However, humans get tired and distracted, and don’t consistently operate at peak performance. Software, on the other hand, operates at the same rate no matter what. Technology can also make workers’ jobs easier and safer, reducing workplace stress which  can increase productivity in its own right.

Why the Lack of Automation in Oakland?

A key reason that Oakland and the United States lag in terms of automation is that upgrading to automated systems is extremely expensive: new, fully automated terminals cost over a half a billion dollars to implement. Nevertheless, one expert estimates that automation makes financial sense when a port is handling around one million TEUs per year. Oakland, currently handles more than twice that amount in total TEU, however none of the terminals in the Port individually service over a million TEU in volume. There are several terminals that are close and in the very near future could hit that tipping point for the return on the investment in automation technologies.

A second reason for the delay in adopting modern automation is the effect on union jobs. Some have estimated that if the Port of Oakland were to implement a modern level of automation, 40-50% of the jobs would be eliminated.

All ports on the West Coast of the United States are organized under a single union, the International Longshore and Warehouse Union (ILWU), which gives them a tremendously powerful collective bargaining position. A strike doesn’t just affect one port, but every single port on the the West Coast.

This union power was used to oppose the introduction of containers in the 1960s and, later, computerized systems for tracking cargo. In each case, however, the union eventually conceded the introduction of these technologies in exchange for higher wages for existing workers and buyouts for displaced ones.

As with previous disruptive technology ILWU will need to be compensated for any reduction in jobs. Today, the average member of the union in Oakland makes $147,000 per year in wages, with benefits equal to another $82,000 per year. Needless to say, providing buyouts to force retirement on these union workers, many of whom have dedicated their entire working lives to port operations, is not an appetizing prospect for the terminal operators.

Nevertheless, several mitigating factors may allow automation to proceed. For one, the job loss calculations largely assume that shipping volumes will not be affected by automation. However, as automation reduces the price of shipping, we should expect to more shipping, which will partially offset some of the job losses.

More importantly, the returns on investment in port terminal automation are large enough that there should be room for a negotiated settlement that makes both the union and the terminal operators happy.

Port terminal automation is no different from any other form of technological disruption, which almost inevitably leads to displacement of some segments of the workforce. In the long run, however, technology ends up creating better jobs and expanded opportunities across broad spectrums of the economy. Managing the transition is hard, often requiring social safety nets from government, as well as concessions from those who stand to benefit from the new technology.

Given the march of “software eating the world,” it’s hard to imagine a future where American ports do not become more automated. Difficult as the transition toward port automation may be, shying away from the challenge means less trade among countries. Shipping technology advancements have shown themselves time and again to be capable of creating a more prosperous and interconnected world.