Why Do Expensive Hotels Charge for Wifi? 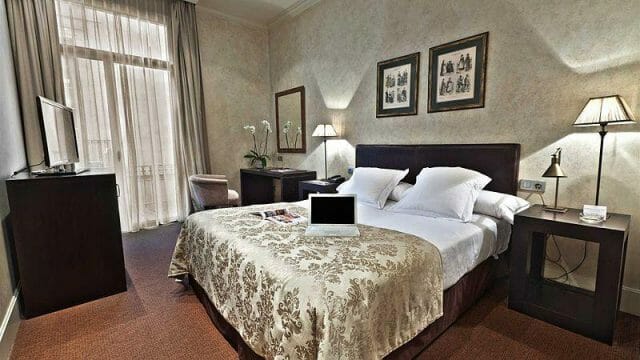 Whether traveling to Chicago or Casablanca, even backpackers paying for the cheapest room in town can expect their hotel or hostel to provide free wifi. With travelers as reliant on Internet access as oxygen, hostels setting world records for the most bunk beds in a single room still provide free wifi.

The same can not be said of expensive hotels. Filtering for free wifi on Hostelworld, a site for budget backpackers, in either Chicago or Casablanca only drops the number of listings from 10 to 8. In contrast, annual Hotel Wifi Reports from HotelChatter show that only around 65% of hotels offer free wifi and that the offending hotels that still charge tend to be more luxurious brands like Intercontinental, Hilton, and Ritz-Carlton.

From a cynical perspective, it’s not shocking that hotels continue to charge for wifi; it has essentially replaced overpriced phone calls as the lifeline of hotels’ bottom lines. As Kurt Ritter, president & CEO of Rezidor Hotel Group, explained in an interview:

“A lot of hotels lived well off telephone income. Telephone income was a big part of — I don’t want to say cheating — but overcharging the customer.”

Logically, however, we’d expect the big chains to initiate the free wifi trend. Instead, they are the laggards. So why do expensive hotels charge for wifi, yet cheap hotels provide it for free?

Theories of the free wifi paradox

The most common explanation for why fancy hotels charge for wifi is that their customers are not sensitive to price: rich customers, especially business travelers who charge everything to the company, don’t care about a $10 surcharge when they’ve paid several hundred dollars for a room. But to a budget traveler, a $10 fee in $30 per night accommodations screams ripoff.

It’s a terrible explanation. By not charging for wifi, budget hotels need to increase the price of each room or bed. And since budget travelers care about the price per night more than anything else, this is risky. If anything, budget hotels should charge for wifi to keep its posted prices low while the Ritz has complimentary wifi, counting on the fact that its customers won’t notice a slight increase in the nightly price but will care about the annoyance of paying for Internet. This is why budget airlines have the most fees: Ryanair, Europe’s super cheap airline, charges extra fees for checked luggage, carry-on bags, heavy luggage, and even printing a boarding pass. All the fees keep its posted prices low.

Another possibility is that luxury hotel chains charge for wifi in order to provide it as a perk. Many hotels do reward loyal customers with free wifi, but this still doesn’t seem worth pissing off the valuable business crowd.

Free wifi threatens to cannibalize another cherished source of easy high profit margin revenue: pay-per-view movies. This suggests yet another explanation. Do hotels really want to provide easy Internet access if it means guests will watch Hulu and Netflix instead of the hotel’s pay-per-view offerings? Those revenues have been decreasing for years, a trend started by more movie channel offerings. In the words of one hotel manager:

“If a traveler wants to watch a movie, they will use Netflix or bring DVDs with them. The popularity of the pay-per-view movie is dying because people are watching more television programs in the guestroom.”

Since expensive hotels are more likely to have televisions and customers who use pay-per-view, this is plausible. Another possible theory relies on the different management styles of budget and luxury hotels.

As HotelChatter’s wifi report notes, many luxury hotels belong to brands that operate a bit like the fast food franchise model: the owners and operators of each physical hotel sign a contract to run a Marriott or Hyatt under the larger company’s brand. The company will enforce certain standards as part of the contract, but since the hotel owners have to bear the expense of maintaining a wifi network, free wifi (and a network that can support it) will only be a condition if the parent company really pushes for it. DoubleTree by Hilton, for example, leaves the free wifi decision up to individual owners. Small, budget hostels, in contrast, rarely have this type of indirect management.

The most convincing reason for why expensive hotels charge for wifi, however, is bandwidth issues. Making people pay for wifi may be the only way to ensure that luxury hotels maintain high Internet speeds.

While cheap hotels usually offer free wifi, they rarely offer good wifi. Waiting a minute for email to load is par for the course at any hotel, and streaming episodes of Mad Men is a dream deferred. When wifi is free, everyone uses it, which lowers wifi speeds. (This is why many hotels charge for connecting more than one device to the Internet.) According to Joe Germanotta of GuestWi-Fi, which sets up wifi at a number of luxury chains:

“When you have to pay for [wifi] as an amenity, [hotels] guarantee you the reliability and speed and the security. It’s becoming a very expensive proposition for the hotel to maintain these services, so it makes sense that they have to charge for it.”

Hotels struggle to maintain speeds for hundreds or thousands of guests and keep up with the pace of technological advancement. While guests in budget hostels might shrug their shoulders at slow loading times — after all, it’s free, so you’re getting what you paid for — those loading times incur the wrath of business and high-income guests with high expectations. Entering credit card information to use the wifi is annoying, but it reduces strain on the system, ensuring half-decent speeds for those that do connect.

We all want fast, free Internet. But we can’t all get what we want. Unless, of course, we nag hotels about it really effectively. And given that heavy Internet users who are annoyed by slow, expensive wifi can publicly and incessantly complain about the hotel’s awful wifi once they get home, we might just earn the ability to while away our vacations on Buzzfeed and Netflix.