Thinking about buying an old school camera that uses 35mm film? You’re not alone, one of the most popular uses of Priceonomics is to look up the prices of 35mm cameras. Since they’re not really manufactured today, you can find them on used markets and Priceonomics can tell you how much to pay for one. Just search for any 35mm camera and we’ll let you know the fair price! To help us kick of this price guide, Priceonomics contributor Keith Thomson has put together a buying guide for 35mm film cameras below. 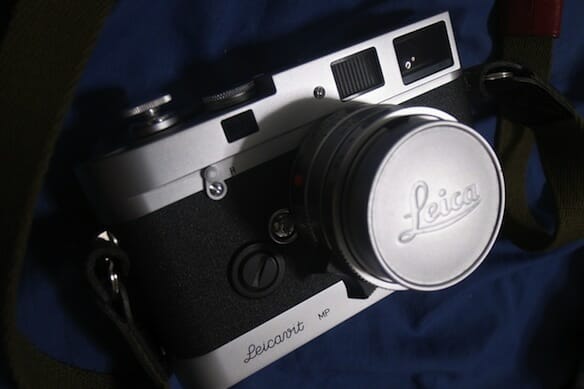 I first began my serious interest in photography 15 years ago when I purchased an old, 35mm film camera at a street flea market for $60. I didn’t know anything about cameras, but it looked like one of the ones that you’d see a newspaperman handling in old, black and white movies, sans flash. It was a Petri Flex, a brand that I had never heard of and the model was “V.” It looked solidly built, clean, the dials all turned smoothly and it was totally mechanical, there weren’t any batteries needed. It came with a 35mm lens attached.

In an old-timey bag, I carried that camera for years, photographing the city streets, or Coney Island, or Toronto or anywhere I might’ve been and learned the basics of photography: How to set an f-stop, use the focus ring, load film, which companies made 35mm film and how each affected the image and I also played with both black and white and color. I never got into developing, mostly because I lacked space in my tight NYC apt. but I quickly advanced from going to the local drugstore for prints to using print labs, where I would experiment with sizing and paper types, but also learned from talking with the workers.

I brought it with me on a trip to Cambodia, when I returned I carried a stack of 4” X 6” prints with me everywhere and showed everyone. Friends were impressed and pushed me to take my photography more seriously. That meant going digital because it subtracted the expense of film and developing. I later learned that my trusty camera, the Petri Flex V, was manufactured between 1961-1964 in Japan and that the company lost the battle in the market when cameras went electronic in the late 70’s. I still have mine, mostly for sentimental reasons, BUT it also still works and is a great piece of equipment.

What to Consider When Buying a 35mm Film Camera

35mm film cameras are very available on sites like Ebay or Craigslist and different brands and film speeds can still be found easily, at Walmart, drug stores, online etc.

FILM SPEED is the same as the ISO on digital cameras: The higher the number the less light needed. So if you’re shooting in a dark environment, you’ll want a faster speed, like 1600 or even 3200. Conversely, if it’s a bright, sunny day, you’ll want a slower film speed, like, 200 or 400, because a lower number means you need less light.

Maybe you’re a photography student or just want to learn the “craft” of physical photography and darkroom developing, or want retain a bit of history, the way people still record music on wax do. There is also the long held argument that the limited surface area of electronic sensors just can’t quite catch the same “feel” as the infinite surface area of a filmstrip.

If you’re looking to buy one, the first thing you’ll want to decide is how much money you’re willing to spend. You can find these old cameras CHEAP. They aren’t collector’s items and can be had for as little as $20 and up to about $200. So, if you’re committed to spending less than $100, stick to it, you’ll have plenty of choices.

The second thing I’d consider is whether or not you want it to be fully manual or electronic. If you’re looking for an autofocus system, you’ll need the electronics, which means you’ll have to turn the camera “on” and “off,” the film will advance automatically etc. If you choose an electronic camera, be sure it takes COMMON ALKALINE BATTERIES (AA, AAA, 9Volt etc.) some old cameras use “mercury batteries,” which are no longer manufactured. Also, check the battery contacts to make sure they are free of oxidation.

One of the reasons so many old cameras survive today is because the bodies were mostly made of metal. They are heavy and solid. “Newer” cameras integrated more plastic or composite materials. As a general assumption, I’d say that the more solid the body “feels” the less likely it is to have internal damage. Also, the ergonomics of holding a camera, the way a camera body feels in your hand, is a very personal preference. Check all the basic functions. Once you’ve loaded the film spool, make sure the automatic film advance is working, or if it’s manual, you’ll have to pull the film advance lever. The lever should be smooth, advancing exactly one entire frame of film. Make sure the shutter speed dial turns and doesn’t stick. Take a few clicks to ensure that the shutter isn’t jammed or sticky.

I would also ask the seller for the camera’s history as far as they know it. Sometimes a camera is just sitting in a closet, or in a moist area (bad), or sometimes it’s gotten a lot of use but was well maintained because the owner was a professional photographer.

Each camera brand also makes its own lenses. Make sure you can find lenses that fit the camera mount. You CAN’T use most new lens on old cameras, but you CAN often use old lenses on new cameras with adapters or modifications. There are more lenses on the market than cameras and, because many CAN be used on digital cameras, they will usually cost more than the camera.

You’ll recognize the brand names of most used cameras in the general marketplace, but now that we’ve become a global marketplace, you also have access to foreign made brands if you’re desire is to dig deep into obscure photography equipment.

Finally, DO YOUR RESEARCH. There are many websites by professional photographers who Review equipment. I read these all the time to educate myself. From these “experts” I learn the technical jargon and their opinions about gear, but I learn more from reading user forum threads, where people with specific questions or problems ask other users, allowing for multiple opinions by amateurs as well as “experts,” of which, you may soon be.