5G Is 200X Faster and Will Unlock Everything. Here’s Who’s Ready. Just like 4G brought us Uber and the appification-of-everything, 5G will rewrite concepts of speed, capacity and entire connected experiences, including applications of the internet of things and virtual and augmented reality. With 5G, those trends will accelerate, and we’ll see mainstream applications of virtual and augmented reality and new digital business models we can’t even begin to fully imagine yet. But we can start to get a picture of what the future holds with 5G, especially in what it means for businesses.

So what are the key features of the new 5G technology and what kind of new applications will they unlock? How much more mobile data will be generated compared to today? And which industries and countries are most likely to adopt 5G as part of their core operations and which are not?

Network speed is straightforward to understand and the aspect of 5G that gets the most attention. In a nutshell, everything on 5G is about to get a lot faster: 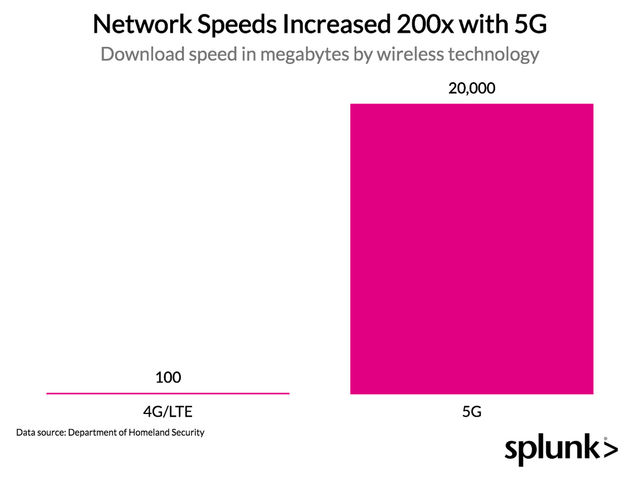 You might think things are pretty fast over the current 4G network, but speeds are estimated to be 200 times higher on 5G. In practical terms this means that over a 5G network you may be able to download a whole movie in 17 seconds over 5G, compared to 6 minutes over 4G.

Download speeds aren’t the only component of network speed to consider; latency is also much improved in 5G. Latency, the time it takes for an application to respond to a command, is reduced by 20x in 5G: Low latency is critical for enabling all sorts of new applications that require real-time access to data and analysis. For example, a self-driving car can’t really rely on current networks for realtime information because the response time is too slow. Under 5G, data made available to these kinds of cars nearer to the time that’s necessary for decision making.

Additionally, 5G technology allows for more devices in the same area to connect to the network than 4G does: 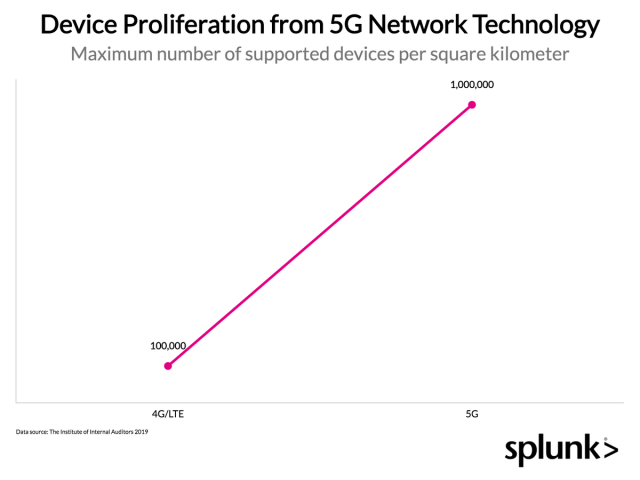 Today, only about 100,000 devices can be supported on the 4G network in square kilometers. On a 5G network there can be up to 10x as many devices, which means that up to a million devices can be connected.. To anyone who has ever attended a sports event or concert where cell phone service has choked to a halt, the inability to connect to the network in large crowds may become a thing of the past with 5G.

Increased device density can enable a whole new set of applications that might seem like science fiction today. Imagine tens or hundreds of thousands of nano-drones flying through an area taking sensor measurements or video.

Lastly, a new feature of 5G compared to prior networks is known as network slicing. Network slicing allows developers to customize networks for particular use cases via an API. Rather than a one-size-fits-all network, developers can create network environments best suited for the applications at hand, whether it’s telesurgery or smart metering.

That means 5G networks demand a lot more data use for both consumers and companies. After the rollout of 5G networks, data use may increase over five times within a short period of time: 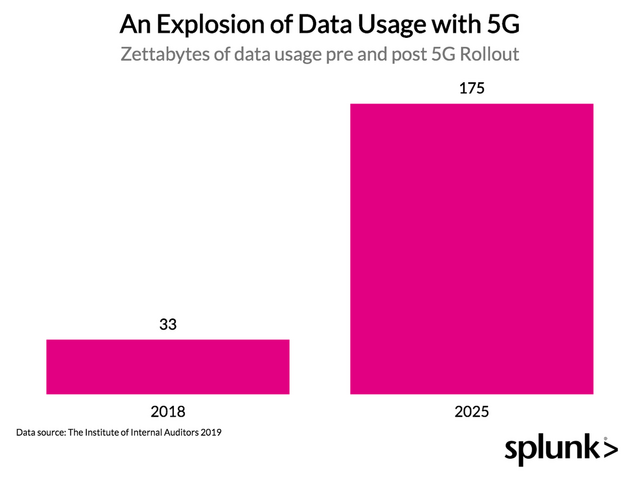 Today, companies already collect a lot of data and use and analyze less than half of it. For an enterprise, feeling a data overload in today’s environment, the 5G networks will make that stress more acute.

Not surprisingly, there is an unprecedented amount of excitement about the rollout of 5G. While consumers are anticipating faster data networks and a new generation of phones, businesses are also heralding the technology’s arrival.

In a report by Capgemini, a consultancy, leadership at industrial companies were asked which technologies are most promising for enabling their digital transformations: 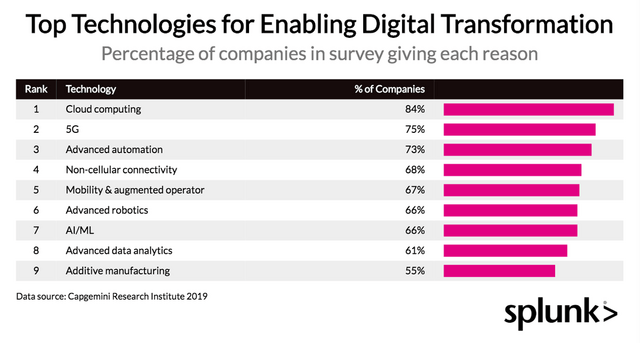 5G ranks second among all technologies surveyed, surpassed only by cloud computing. Even technologies with a similar level of anticipation like artificial intelligence and machine learning are rated far behind 5G when it comes to enabling digital transformation.

When you think about 5G, what most often comes to mind is its increased speed and the resulting efficiencies that come from that. However, according to Capgemini, that’s not the primary driver of why companies are willing to jump into 5G: 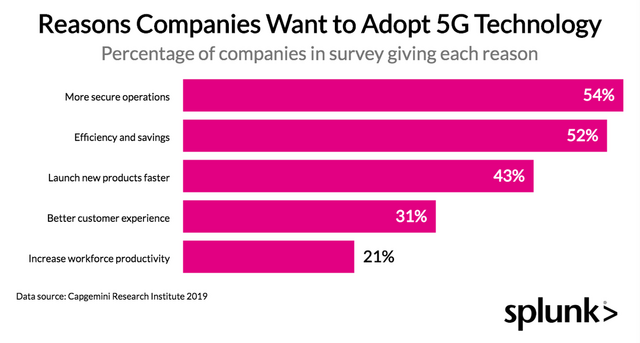 The primary reason given for 5G adoption is better security. Better device identity protection in 5G network technology has the potential for more secure networks compared to present. Additionally, 5G networks have the ability to enable more security applications like real-time monitoring and surveillance of key assets. As security breaches keep getting bigger and more expensive, the value of enterprise security continues to rise.

It’s not surprising then industries that are most willing to quickly adopt 5G are ones where security is of the highest priority: 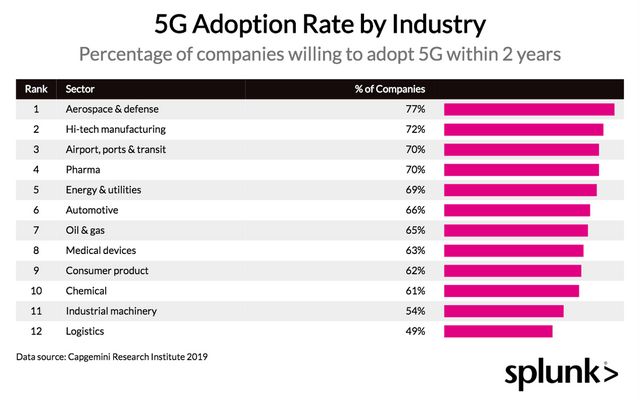 The aerospace and defense industry leads the pack in terms of willingness to adopt 5G, followed by hi-tech manufacturing and airports, ports and transit. In each of these industries, better security can save lives or save substantial costs or both.

Here are the percent of industrial companies seeking to adopt 5G within two years by country: While things are about to change substantially, 5G can’t fix all our technical problems. There are  promising applications enabled by 5G, but plenty of others  will neither be helped nor hindered by a new high-speed network. However, the distinctive network technology of 5G can enable applications that were previously not possible in the following areas:

Real-time applications. As the result of the lower latency of 5G networks, applications requiring near instant response can become possibilities. Augmented reality applications such as glasses that provide you real-time data on your surroundings would actually work.  While many autonomous vehicle applications are meant to work without any data networks (imagine how dangerous a car would be if it briefly lost control during a network dead spot), lower latency can affect the remote operations of vehicles, machinery and drones.

Dedicated networks. While all prior networks were one size fits all, networking slicing will allow network customizations suited best to a given application. As such, you can imagine various administrators of mobile virtual network operators (MVNOs) geared to different types of industrial applications. Networks dedicated to machinery, telesurgery or smart metering may emerge.

It’s difficult to predict the future, but historically when we’ve added faster networks, users have rapidly adopted the new technology and applications have emerged that take advantage of the added speed. On the consumer side, it seems clear that we are in for a world of change as people embrace faster speeds and its benefits.

When it comes to enterprises, adoption will likely be swift as well. Whatever the killer applications end up being, one thing is clear — they’re going to use a lot more data. How companies store and analyze the data exhaust of the 5G revolution may be a source of headache or competitive advantage for businesses in the years to come.

Splunk helps organizations worldwide turn data into doing. With solutions for IT, security, and business operations, Splunk empowers people to make faster, better decisions and take action on all kinds of data in real-time. To see more about the future of 5G and data, check out Splunk Predictions 2020.