Chen Xiao was a young Chinese woman with a promising career in fashion when the recession hit. Her work came to a standstill and her two year relationship with her boyfriend ended as well. Dispirited, she went online and wrote:

“Tired, I am just so tired. I sometimes want to give up my life. I don’t want to belong to myself. I just want to live online and let netizens arrange the rest of my life.”

Unlike your average dispirited twentysomething, she actually meant it. She surrendered control of her life to her online followers. According to their suggestions, she ate noodles on a street they chose, took pictures of herself in front of a Chinese flag in Tiananmen Square, and did people favors. She posted pictures of her performing each task online for her followers to see. The number of people following and engaging with her grew quickly. 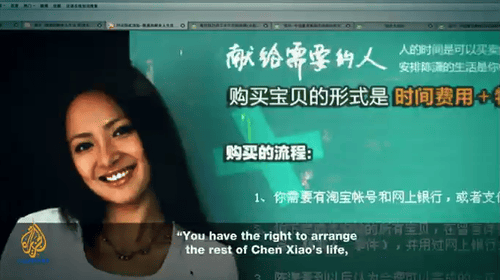 When Chen Xiao fell ill several weeks into her new experiment, her fans worried about her livelihood and suggested that she start charging for her time. She did so, charging $1 for 8 minutes, $3 for an hour, and $15 for a day. Some people paid to make suggestions like the noodle house, but a majority asked her to do something for them: deliver a birthday cake, accompany a puppy to the vet, or offer Valentine’s Day flowers on behalf of an absent lover.

She continued calling it a cyber lifestyle where she “sells her life.” And she became a hit in China, sought out by entrepreneurs with business propositions.

Although wrapped in a veneer of artistry, though, Chen Xiao had really set up her own TaskRabbit business.

Is there a fortune to be made starting up a taskrabbit service in China? Some have argued that Chinese society lacks sufficient levels of trust for such a service – a claim this author doubts but has no authority to critique. Others have questioned whether there is a sufficient base of potential TaskRabbits who have access to smart phones and the web. (Really? In a country of 1.3 billion?)

One estimate we found puts the number of personal service companies in China at 5,200. It also says that, despite China’s plentiful, cheap labor, they are struggling to make money.

Chen Xiao was in high demand as a cultural phenomenon, and she never really tried to charge enough to make a good living and test the prices she could charge. But even so, doesn’t it seem like a good demonstration that there is demand for a TaskRabbit in China?