A Dragnet for Pee-Wee

As it turns out, bike theft makes lots of people unhappy. About a month ago, we wrote a blog post about the economics of stolen bikes. It struck a nerve with cyclists. From NPR, to Pee-wee Herman, to Daring Fireball, the article ricocheted around the web reaching hundreds of thousands of people. Many bike theft victims shared their stories with us and this much was clear – getting your bike stolen completely sucks. 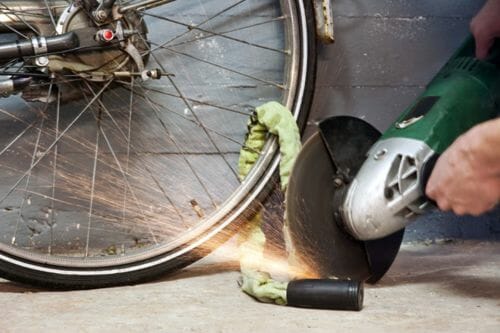 While bike theft is an epidemic in major US cities, most people seem resigned that it’s just a fact of life. It’s a forgone conclusion that the government isn’t going to do anything to prevent bicycle theft – they have enough on their hands. Bike theft hurts a lot of people, but it’s not like anyone is going to devote actual resources to stopping it.

So, at Priceonomics, we thought we’d take a crack at trying to reduce bike theft. Could we use software to help people fight back against bike thieves? As a company, we decided to spend a week hacking on technology solutions for bike theft. It’s an issue we care about, so we thought we’d give it a go.

Here’s what we came up with.

As we discussed previously, there are two kinds of bike thieves – amateurs and professionals.  Preventing amateur bike theft is largely solvable – lock your bike better. We decided to focus on solutions to reduce professional bike theft. These are the guys that have tools that can buzz through a u-lock. These are the assholes. 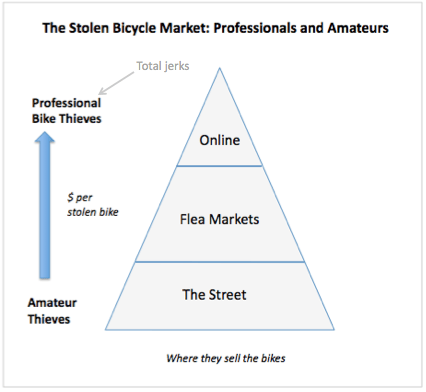 Professional bike thieves exist because they can make a profit. Luckily, this author went to business school and remembers exactly one equation from the experience:

From a criminal’s perspective, the “Cost” of bike theft is about zero. The odds of getting caught are negligible and the penalty is about zero as well. Most commentators suggest that in order to prevent bike theft, the government should increase the penalties to make it a less attractive crime. As we stated earlier, we somehow doubt government intervention is going to happen any time soon.

We decided to focus on the revenue half of the equation. Could we make it harder for bike thieves to turn their contraband into cash? If you make it nearly impossible to sell a stolen bike, fewer bikes should get stolen because it’s more difficult to turn a profit.

The solution we built is based on the only effective solution to bike theft we’ve encountered – self-policing by victims. If your bike is stolen, try to find where the thief is selling it and stop them. In San Francisco, bike theft victims know to search for their bikes at 7th and Market, the Oakland flea market and on the local Craigslist. The result of this self-policing? Thieves have to put the bikes on a van and sell them in another market. That’s a major pain in the ass for them.

So that’s what we decided to build. A tool to help you track down your bike when it gets stolen and make it really hard for criminals to flip it for a profit by selling it online. A dragnet for stolen bikes.

What we’ve built is a search engine of almost every bike for sale on the web. If someone out there is trying to sell your stolen bike, you can catch them here:

If your bike is stolen in San Francisco and the thief is selling it in Los Angeles, now you have a way to find it. If they’ve stripped the bike down to its frame and are trying to auction it off, you can find it too. You can search on the site or set an alert and we’ll notify when bikes matching the description pop up. Once you find it, you can contact local police to figure out how to get it back.

We built this stolen bike finder because we want to make it really hard for criminals to sell stolen bikes online. It boils our blood that it’s so easy to sell stolen bikes. It’s unconscionable that the major “classified” and “auction” sites allow this. As bike lovers, we don’t want to buy and sell bikes where thieves are cashing in.  That’s just kind of perverse, right?

So, we decided to build another thing too.

Racklove – a nice place to buy and sell bikes

As people who love bicycles, we’re not very pleased with Craigslist and eBay. Bikes get stolen and then flipped for a profit on marketplaces like these.  The whole reason bikes get stolen is because reselling them online is so easy to do. 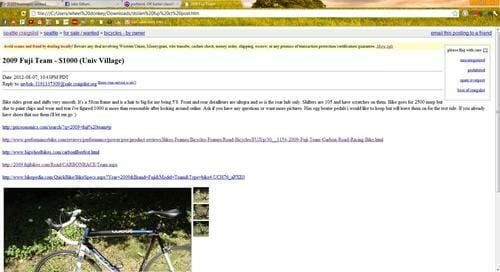 Stolen bike listing found on Craigslist (story here). Turns out the thief is a Priceonomics user 🙁

So, we created an alternative marketplace for people that just want a nice place to buy and sell bikes. If the current marketplaces are cesspools of stolen bikes, then it would be nice if there were at least an alternative. A place where the community could prevent stolen bikes from being sold and just generally be excellent to each other. Here it is: 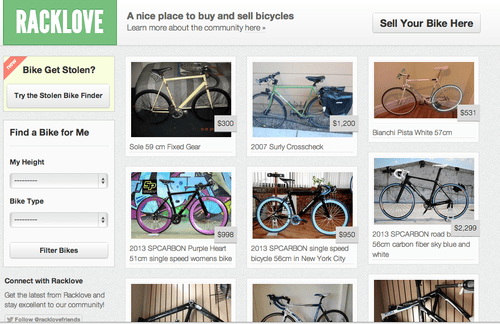 So check out Racklove. Before we released it, we started testing it out with some Priceonomics users and used bike dealers in San Francisco. Oddly enough, people starting uploading bikes, messaging each other and selling bikes. Whoa! 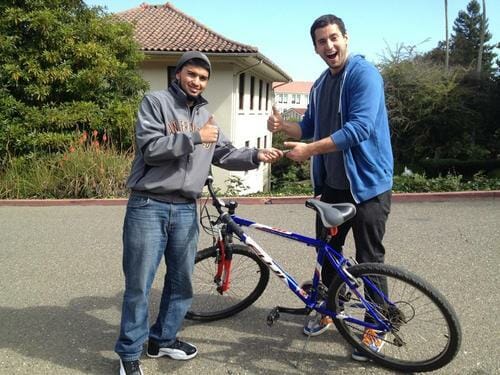 So, if you love bikes, we hope you’ll check it out. It’s mostly in San Francisco for now, but many people are will to ship their bikes nationally. If you see a bike you really like, leave a nice comment and brighten someone’s day! If you see a bike that looks suspicious, raise hell! If there are features you’ve always wanted in a bike marketplace, let us know and we’ll build them.

You know what would be great. If people stopped stealing bikes because there was no way to profit from the crime. If your bike is ever stolen, the Stolen Bike Finder gives you the tools to make it very hard for the thief to sell your bike online. It’s the dragnet that Pee-Wee Herman needed when his bike was stolen.

The harder you make it to profit from bike theft, the less prevalent this crime will be become.  Marketplaces have a duty to prevent stolen goods from appearing on their site. Since the current powers that be are royally shirking this duty and screwing over bikers everywhere, we built an alternative – Racklove. We hope you like it.