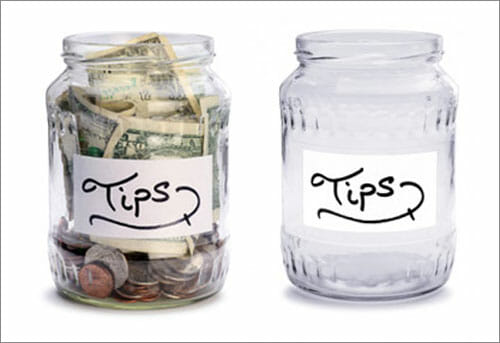 When the upscale New York City restaurant Sushi Yasuda decided to ban tipping, New York Times coverage of their decision launched a debate on the practice of tipping. The story unearthed the fact that tipping has inspired passionate advocates for its overthrow for decades, but never a mass following to make it a reality.

This week, San Diego restaurateur Jay Porter is reporting on the closest thing to a natural experiment on tipping that has ever been run. Of his two restaurants, both high-quality table-service establishments, one has accepted tips as normal. The other has refused to accept them, instead charging a fixed percentage service fee.

An unique insight of his writing is that tipping almost inevitably distracts from running a quality restaurant. Porter finds that his no-tip restaurant is better run, with employees focused on their mission of delivering a great dining experience.

But before explaining why, it’s best to understand some of the tenets behind the classic case against tipping.

1) Tips are unrelated to good service

Tips are meant to reward excellent service, but most people tip the same percentage regardless of how well they are treated. Research from Michael Lynn of the School of Hotel Administration at Cornell suggests that performance differences account for under 2% of the variation in tips. Server behavior that does significantly improve tips include forecasting good weather and drawing pictures on the back of checks.

But good tips are mostly good luck. Servers who happen to get generously tipping big spenders do very well. Waiting on tables of scrooges for a night means earning under minimum wage for the day.

An article in the New York Times Magazine traces tipping back to its roots and finds a snooty practice at odds with American egalitarian ideals:

Tipping began as an aristocratic practice, a sprinkle of change for social inferiors, and it quickly spread among the upper classes of Europe… After the Civil War, wealthy Americans began traveling to Europe in significant numbers, and they brought the tip home with them to demonstrate their worldliness. But the United States, unlike Europe, had no aristocratic tradition, and as tipping spread — like “evil insects and weeds,” The New York Times claimed in 1897 — many thought it was antithetical to American democratic ideals. “Tipping, and the aristocratic idea it exemplifies, is what we left Europe to escape,” William Scott wrote in his 1916 anti-tipping screed, “The Itching Palm.” One periodical of the same era deplored tipping for creating a class of workers who relied on “fawning for favors.”

Yet today it is American restaurants that leave servers reliant on tips for their paychecks while Europe largely levies service charges for the purpose.

3) Economists don’t get it

According to the dismal science, no one should tip at all if they are not a regular. Regardless of whether the service was good or bad, tipping at the end of the meal won’t change anything.

Although the service at a restaurant is a factor of how all the employees perform – the waiters, busboys, chefs, and so on – only servers collect tips. And due to legislation worried about owners absconding with tips, it’s usually illegal to redistribute tips among the staff.

As a result, servers are much better compensated than cooks and dishwashers. Since minorities (especially immigrants with poor English) work disproportionately in the kitchen, the disparity has racial basis.

An article in Esquire on the subject also points to research from Dr. Lynn at Cornell on how gender, race, and looks dictate how well servers are tipped. Or, in the author’s words, “The tipping system catches us all in a regressive cesspool of our own worst prejudices.”

The idea of a tip as incentivizing good service is rarely used in the service industry.  We tip barbers and coat checkers along with waiters, but not doctors, flight attendants, and any number of occupations where service is important.

Despite these arguments against tipping, the practice endures. The findings from Jay Porter’s experiment, however, are intriguing because they suggest a very compelling reason for restaurants to copy his tipping ban.

According to Porter, the problem with tipping, from a managerial perspective, is that attention is divided between the restaurant’s mission and the pursuit of tips and a favorable split. As we’ve seen, tactics that increase tips usually have little to do with better service. And since it is illegal for managers to split tips among the entire staff in much of the country, it falls to workers to do so according to a culture called “tipout.” But as this is not obligatory, it is inefficient and can foster cheating, resentment, or worse. For example, servers may share tips only with kitchen staff that do them favors, such as fulfilling a special request from a diner.

The result, Porter writes, is two new, parasitic businesses: “The business of the server selling the perception of extra attention to the guest for tips; and the business of the kitchen workers selling favors to the servers for tipout.” This is why Porter advocates not only charging a service charge in lieu of accepting tips, but actually banning tips altogether:

The other reason we didn’t accept tips was that removing any option for tipping was the only way to remove those two parasitic businesses — the side business between the server and guest, and the side business between the server and cooks — from our own company.  By not allowing these side businesses to exist, we created an environment where all of us were engaged in only one mission, our stated goal of creating remarkable experiences for our guests, around local food and drink.

For pursuing this experiment and sharing his results, we offer a hat tip to Jay Porter and the staff of his restaurants. You can read his updates here and learn for yourself how your tipping detracts from restaurant quality.