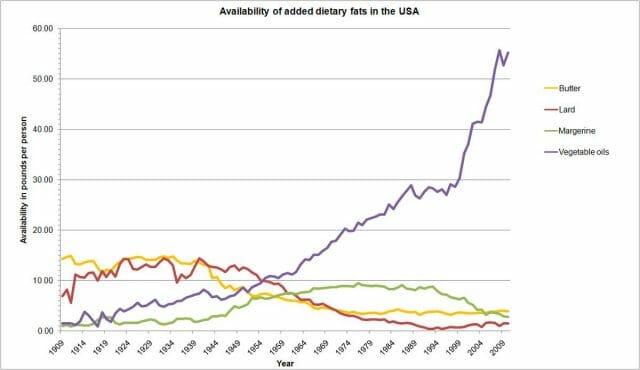 When was the last time you cooked dinner using lard? Was it sometime prior to World War II?

Over the past 15 years, the per capita availability of vegetable oils in America has nearly doubled. This includes oils like olive, canola, and peanut. Meanwhile, butter availability has tailed off after once being the country’s go-to fat. America has now become the land of canola and olives. The data only looks at availability, but the USDA considers this measure a pretty good proxy for actual consumption.

How did vegetable-based oils replace butter and lard in the American kitchen? According to Drew Ramsey, author of The Happiness Diet, one ingredient was clever marketing.

Ramsey claims the rise of vegetable oil began with Procter & Gamble’s famous Crisco cooking oil from the early 1900s. P&G put in unprecedented efforts to market this cheap factory-produced oil. They passed out cookbooks with Crisco-friendly recipes. They gave samples of the product to grocers and nutritionists to try for free. And they touted Crisco as a healthier alternative to butter. Which had not been substantiated by science, but health claims on food packaging back then were not strictly regulated. P&G’s comprehensive marketing campaign made Crisco and vegetable oils like it a hit in America.

However, the second half of the century saw more and more health risks associated with the chemical composition of cooking oils. Most damning was a study by the vegetable oil industry itself that showed the dangers of partially hydrogenated vegetable oil. By the late 1990s, because it appeared healthier than the current oil giants, canola oil became the most sought-after vegetable oil by an increasingly health-conscious public. Olive oil consumption also has increased more recently, though not as dramatically as canola oil: 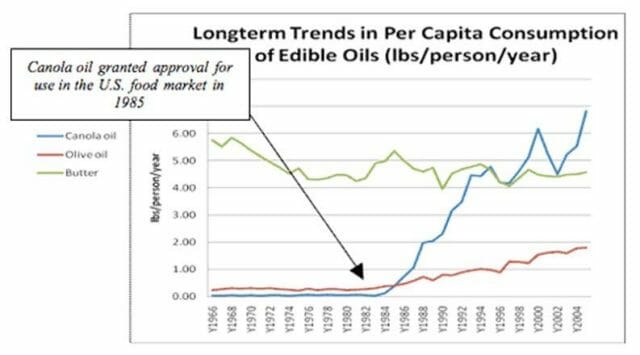 We’ll try to find some data to forecast if cooking with lard is about to make a comeback. We’ll keep you posted.