Americans Smoke More Cigarettes than the French (Sort of) 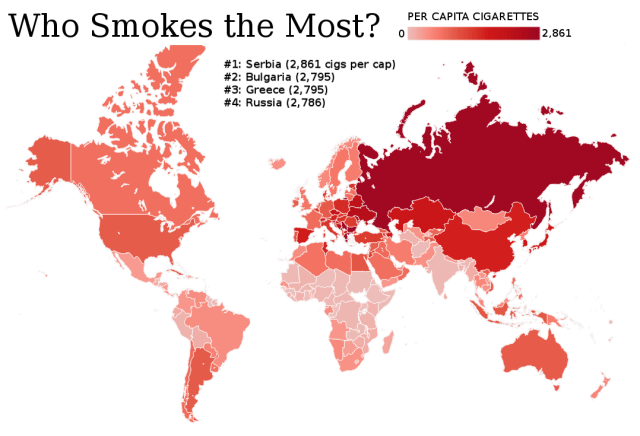 The American stereotype of the smoking Frenchman probably exists because approximately 30% of French people smoke, compared to about 18% of Americans. But American smokers smoke a lot more than French smokers.

To get the 18% number, the CDC defined “current smokers” as “persons who reported smoking at least 100 cigarettes during their lifetime and who, at the time of interview, reported smoking every day or some days.” These are not the only people consuming cigarettes, obviously. But if these segments of the population were the only people consuming cigarettes, then a French smoker would smoke, on average, 2,847 cigarettes a year, and an American smoker would smoke 5,711. But that’s nothing compared to the world’s top cigarette-smoking countries (relative to their populations) — almost all of which are in Europe:

A whopping 40% of the Russian population smokes — a percentage that’s about the same in Bulgaria and Greece.