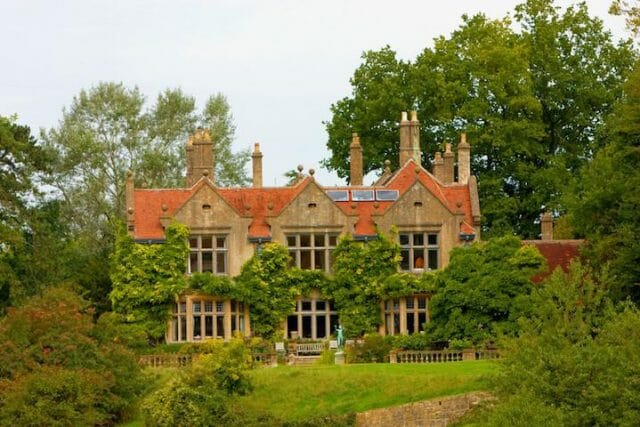 The price of solar has plummeted since the late 1970s. Back then you’d pay $77.67 per watt for solar cells, and you still wouldn’t be able to produce electricity—not until you connected a bunch of cells together to form a solar panel. Last year, the price for a fully made solar panel—including the glass cover, aluminum frame, and electrical wiring—reached 57 cents a watt.

Lower prices combined with financing options, which enable homeowners to put solar panels on their homes with no money down, have led to explosive growth of residential solar in the United States. In 2006, only 30,000 homes had solar panels. But by February 2016, there were over one million homes with solar. Some experts expect that over two million homes will have solar by 2018.

Residential solar is growing, and growing fast. But what type of homeowners put solar on their homes? Is it only the wealthy and environmentally conscious? Or have solar panels become a mass market product?

We explored these questions using data from Priceonomics customer SolarPulse, which maintains a data set on 11,000+ California residential households that bought solar panels from 2000 to 2015. We compared these homes and their owners to the average homes and homeowners in the same geographic areas. As solar energy has become cheaper, has it become mainstream? Or is it still a “luxury” item?

Our analysis shows that expensive homes and wealthy homeowners are still much more likely to have solar panels. But this is becoming less true over time. Since 2012, the incomes and home values of people going solar have decreased dramatically.

The adoption of solar seems to have democratized.

Solar Has Been For the Wealthy

We began by comparing the value of homes that have installed solar to the average home price in the same area. The following chart looks at twenty California zip codes. All estimated household values are based on 2015 data. 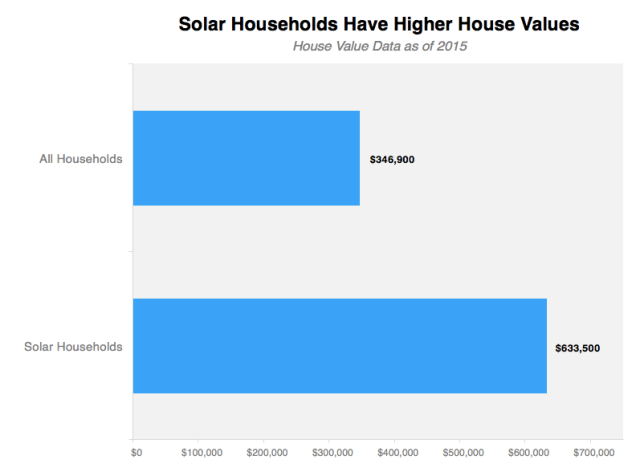 At more than $630,000, the value of homes with solar are 80% higher than that of the average household in the same areas.

We also examined the difference in household incomes between owners of solar homes and the average household. Our data shows that households with solar have much higher incomes on average. 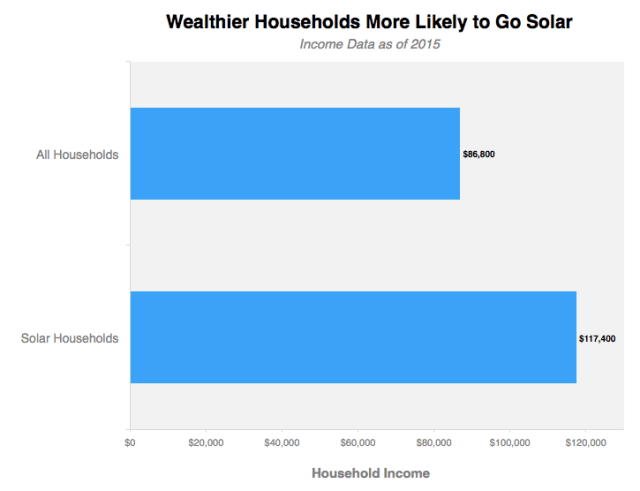 The people investing in solar still tend to be high income. But with prices dropping, this looks to be changing.

The growth of the residential solar market accelerated tremendously in the 2010s. In the 20 California zip codes that we analyzed, new solar household growth was slow—until it shot up in 2010. 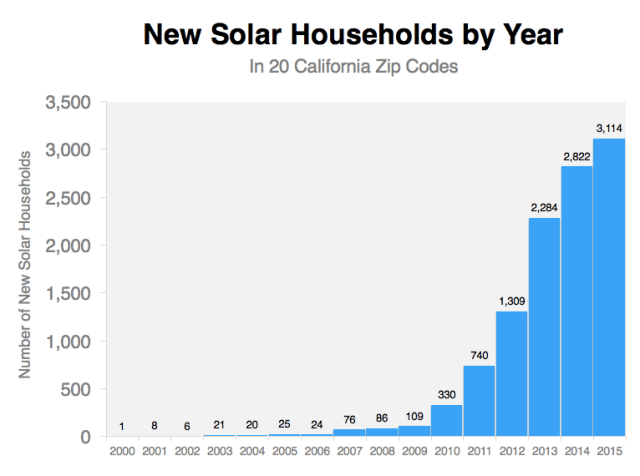 So has the growth of the market increased accessibility?

In short, less wealthy people are increasingly investing in solar. 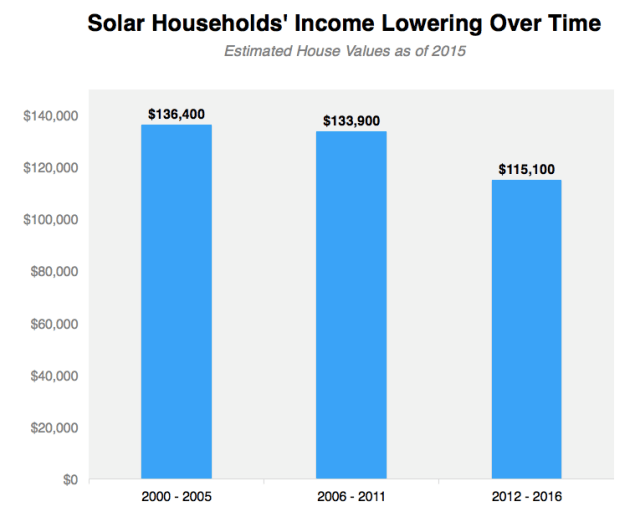 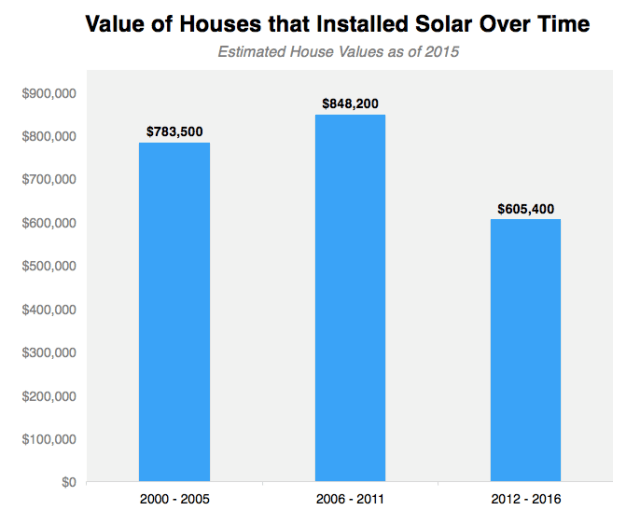 As more households adopt residential solar, the demographics of solar households also change. Household incomes and house values are lowering, and solar seems to be reaching more of the middle class.

Residential Solar Becoming a Financial Decision, Not an Environmental One

Skeptics of green energy have often doubted whether certain technologies could ever reach more than a niche of wealthy, environmentally-conscious consumers. To reach a mass market, a technology needs to be cost-effective.

Our dataset includes a measure of the “environmental orientation” of households based on their purchasing behavior, so we tested whether homeowners are making a financial or environmental choice. 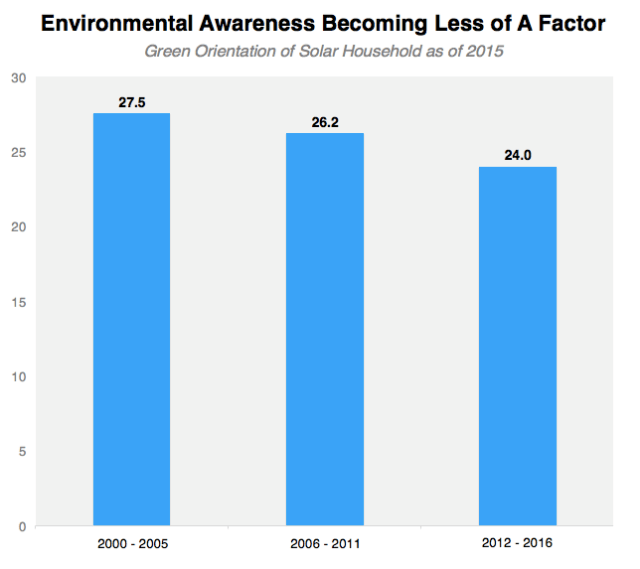 With the price of residential solar decreasing, adopting solar has become more of a financial decision.

New technology, whether it’s a phone, computer or solar panel, often starts off as a luxury purchase for the wealthy. As the technology gets cheaper, however, access can become much more democratic.

Lower solar prices have helped make residential solar more accessible, as evidenced by this data. The average homeowner with solar still tends to be wealthy. But the incomes of individuals going solar—and their home values—have decreased markedly since 2012. What’s more, installing solar panels appears to be evolving from an environmental decision to a financial one as solar energy gets cheaper.