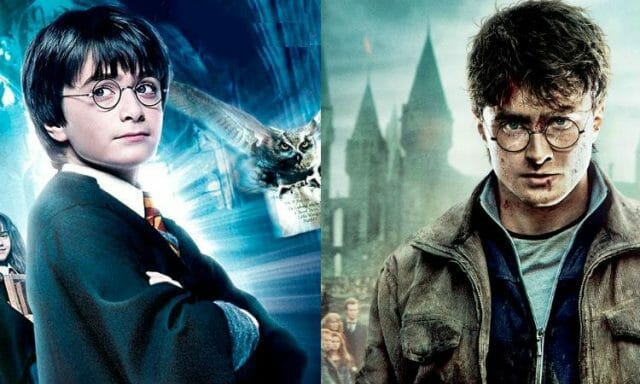 Is Harry Potter, the immensely popular series of young adult fantasy novels by J.K. Rowling, and films based on those novels, “just for kids”?

If we’re talking objectively about who reads the books, the answer is clearly ‘No.’ Aside from the fact that we think people should read whatever books they want, many of us at Priceonomics are full-grown adults who think that Harry Potter is awesome. We’re also aware that there are millions of other adults out there who are prepared to fight to the death for their right to read and love Harry Potter. We’re not here to yuck anybody’s yum. However…

There’s this one thing many adult Harry Potter fans say when defending their love of a series initially targeted at tweens: The first books are ‘for kids’, but they become more mature as you move through the series. The last books, they claim, are very sophisticated and ‘adult.’

J.K. Rowling published the first book in the series, Harry Potter and the Sorcerer’s Stone, in 1997. In the book, an eleven-year-old boy named Harry finds out that he’s actually a wizard with magic powers, and gets whisked away to wizard school. He also finds out he’s a very special and important wizard, with many powerful friends and enemies he never knew existed. Adventure ensues.

11-year-old Harry receives his letter of acceptance to Hogwarts (from the film: ‘Harry Potter and the Sorcerer’s Stone’)

The first book ends at the completion of Harry’s first year — corresponding roughly to 6th grade in muggle (non-wizard) America. The second book in the series, Harry Potter and the Chamber of Secrets, was released in the UK in 1998 and takes place throughout Harry’s second year of school. Rowling went on to publish about a book a year over the next eight years, each corresponding to another year of school for Harry. Harry’s age kept more or less apace with the age of the core readers, many of whom read each book the very day it was released.

“This is a series that grows with you,” a Reddit user argues. “The language, plot-lines, and themes all get more sophisticated as the protagonists (and readers!) grow, so ideally you’d be reading a book a year starting with when you’re roughly Harry’s age and moving on up through high school.” Others claim they’re going to enforce this schedule with their children, once their children are Harry’s age.

The later books are certainly more “mature” in terms of what they’re about: The stakes are higher, the conflicts more violent and, sometimes, more tragic. The characters go through puberty and start dealing with romance. The later books are also substantially longer than the earlier ones.

But adult fans also claim the language gets more sophisticated from book to book. This is the claim we were interested in exploring.

The idea is that the first book — in which Harry is 11 — is written roughly to be understood by sixth-graders, and the seventh book — in which Harry is 18 — is written to be understood by seniors in high school (many of whom are, technically speaking, “adults”.) As a fan on another forum writes: “It’s almost as if JK Rowling set out to write a kids’ book and either forgot or didn’t feel like dumbing her stuff down as she went on.”

The Priceonomics Analysis Engine includes an app that measures the reading level of any given text. The analysis is based mostly on average word length and average sentence length, and roughly corresponds to the number of years of education required to understand the text. If you’re curious about the algorithm, you can read our blog post about it or the documentation.

We realized we could use our app to determine whether the later Harry Potter books were, in fact, written for a more advanced audience than the earlier ones. 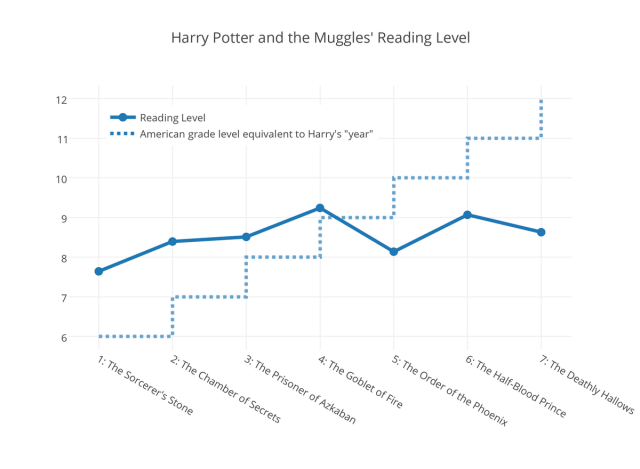 The reading levels of each Harry Potter book compared to the grade Harry is in in each book; Priceonomics

The reading level actually started out too difficult for many readers Harry’s age. The first book, in which Harry is in the British wizard equivalent to 6th grade — is written at a grade level of about 7.6. After that, reading level started to climb, but much more slowly than the rate at which Harry was progressing through school. Readers caught up to the book’s difficulty. The hardest of the books to read is the fourth: Harry Potter and the Goblet of Fire. This book is at a reading level of 9.2, and in it, Harry is in the equivalent to 9th grade.

Then something weird happened: The fifth book, Harry Potter and the Order of the Phoenix, takes place another year later, when Harry is in the equivalent of 10th grade. But the reading level went down from 9.2 to 8.1. It bounced back up in the last two books, 9.1 in the sixth and 8.6 in the seventh, but never again approached Harry Potter’s level of education: in the sixth book he’s in the wizard school equivalent to 11th grade and in the seventh book he’s in the equivalent to 12th grade.

It turns out that the language in Harry Potter books doesn’t get much more sophisticated as the series progresses. Instead the books at the beginning and the end of the series hover around an average reading level of 8.5.

It’s surprising that this is the case, given that so many people say the language of the later books is more advanced or difficult. These readers were probably distracted by the much more noticeable (and probably more important), difference between the books: the plot and themes get much darker, and Harry Potter’s life becomes more tragic. While the early books are romps through Rowling’s fantasy land, the late ones are much heavier. War breaks out in the world of wizardry, friends turn on one another, and people die. Readers who say the books get “more mature” mean the world of Harry Potter stops being an escape fantasy and starts looking much more like our own.