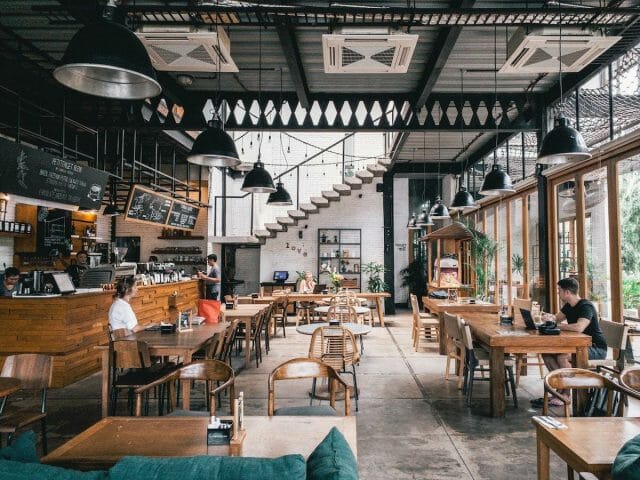 The coronavirus outbreak and resulting shelter-in-place orders have created enormous changes in the hourly job market. Some industries, like hospitality, have seen unprecedented job losses. Other industries, like warehouse and logistics, have actually seen job growth as the delivery of goods becomes essential.

In this article, we’ll look at job applications. Are people looking for work currently or still shying away from employment due to the virus?

We found that in March and April, job applications for hourly jobs plummeted compared to February. However, this May, we’ve seen a very strong rebound. A lot of this rebound in May has been due to restaurants and healthcare facilities reopening. Nevertheless, most industries are seeing job applications below pre-pandemic levels.

While almost all metropolitan statistical areas have seen an increase in job applications, Miami, Las Vegas and Baltimore have seen the largest surge in applications this May.

First let’s examine the overall national trends in job applications. What happened to the number of applications on Snagajob since before the pandemic through the end of May? The chart below shows the total applications, indexed to 100 in February: 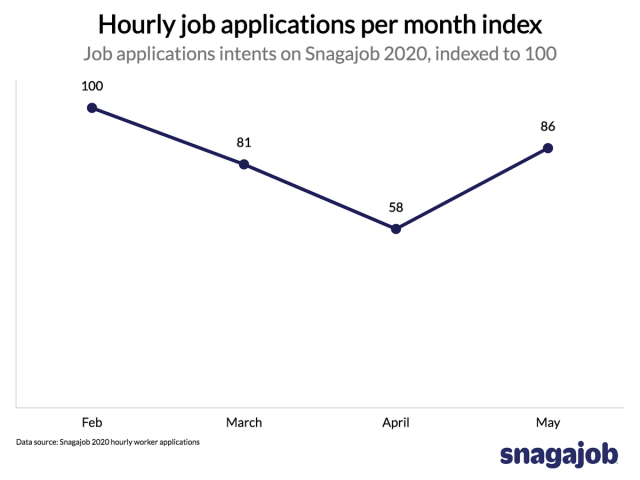 Is this dynamic of falling (and then rising) job applications because of fewer job postings available or because skittish individuals are less likely to apply for jobs during the pandemic? The answer is a little bit of both. The chart below shows the number of job applications per available position on Snagajob: 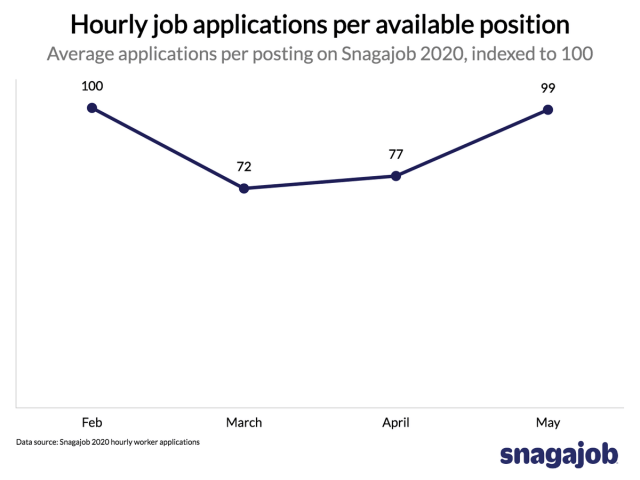 While people are applying for jobs again at pre-pandemic levels, total applications are still down because the number of job postings are still less than in February: 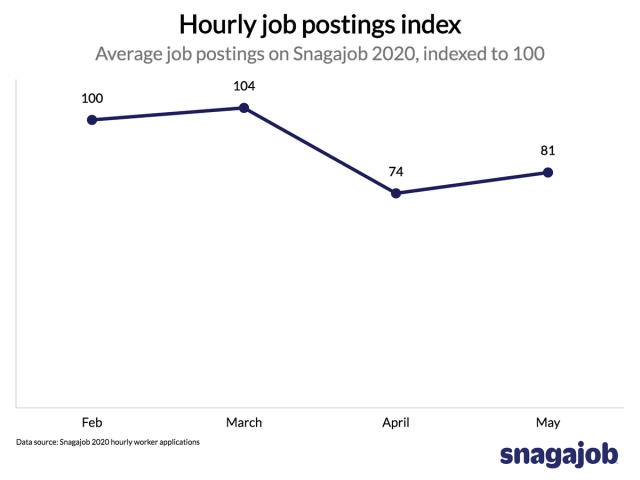 Compared to February, hourly job postings are down 19%. Companies are hiring more in May than in April, but still at a much lower level than in February. On the national level, it appears as though both employers and potential employees are re-entering the labor market in May.

Which industries are seeing this great rebound in job postings this May? The chart below shows categories experiencing the largest (and smallest) surge in applicants last month: 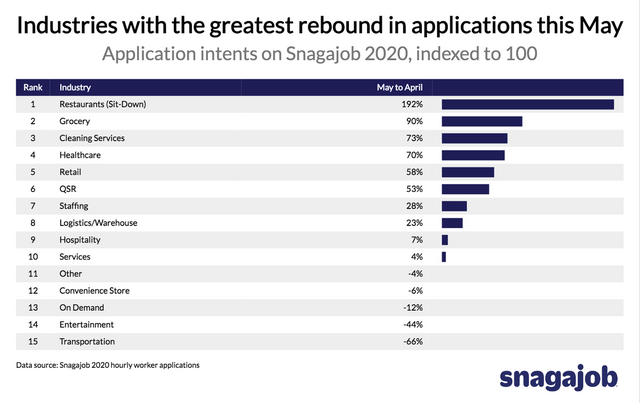 By a considerable margin, sit-down restaurants have seen the largest surge in applications in May compared to April. Because of the COVID-19 lockdown, most restaurants across the country were closed for sit-down dining in April. As these restaurants have reopened, job applications have returned. Grocery stores continue to attract applications, as they have continued hiring throughout the pandemic. Cleaning services have also rebounded during reopening, as have healthcare job applications as places like dentist offices are now allowed to operate.

However, most of these categories are receiving fewer applications in May than they were prior to the pandemic beginning in February: 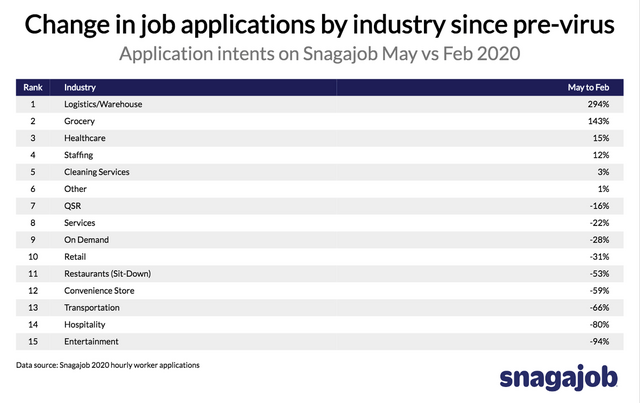 Compared to prior to the pandemic, only the categories of Logistics/Warehouse have seen strong applications growth. On the other hand, Hospitality and Entertainment applications are down over 80% from February.

As economies have reopened across the United States, we have seen a growth in job applications. The chart below shows the growth in job postings in the top 50 largest metropolitan statistical areas (MSAs) on Snagajob in May compared to April. 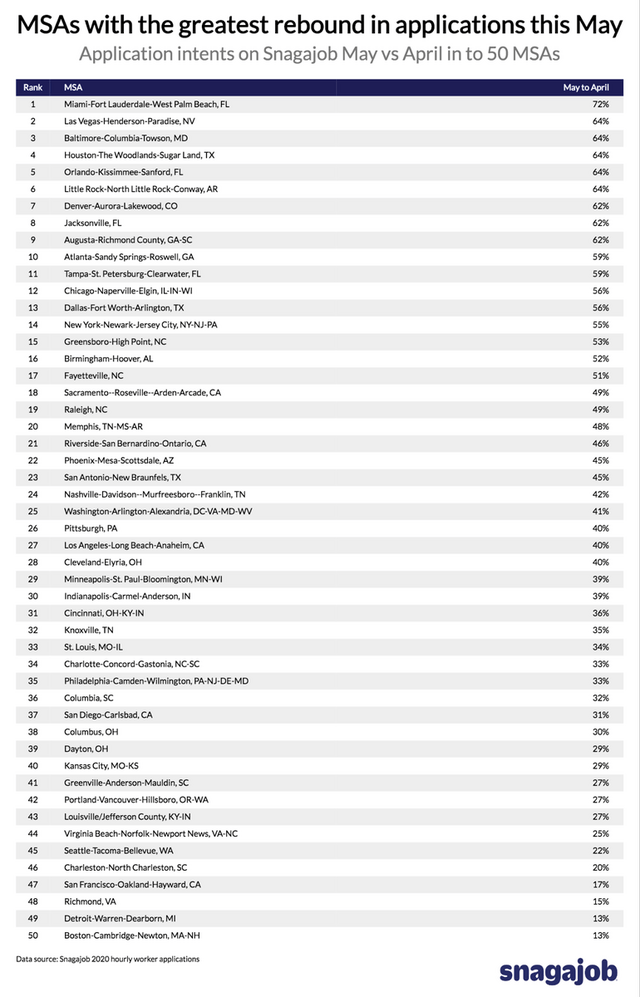 However, almost all geographies are seeing fewer hourly job applications than before the pandemic in February: 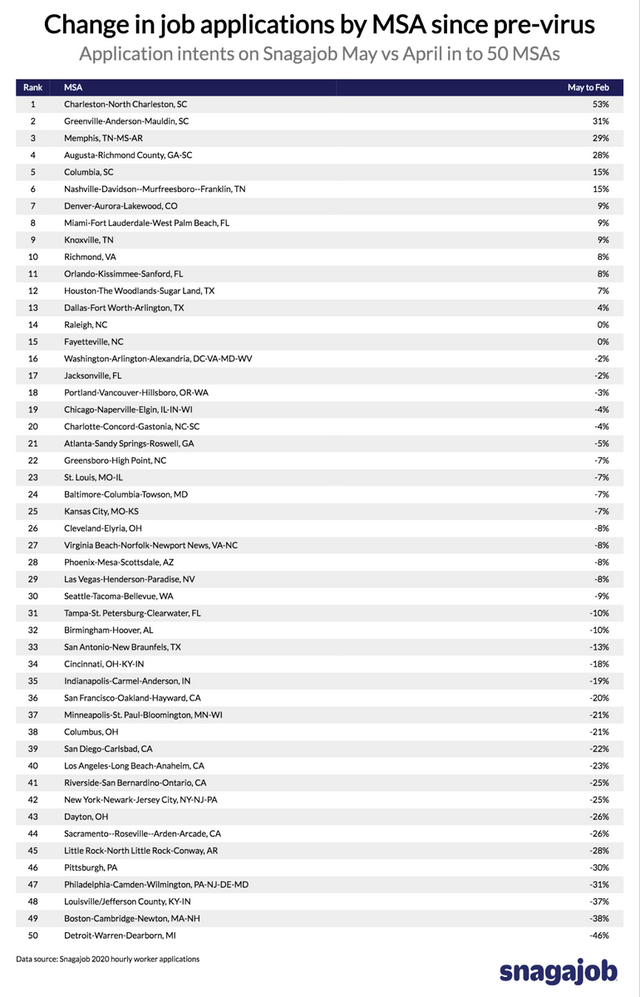 Just 13 of the top 50 largest metro areas on Snagajob are receiving more applications than prior to the pandemic’s start in February. Each of the top 6 locations are in the South, with Charleston and Greenville, South Carolina leading the way. Of all the metros we examined, Detroit has had the largest dropoff in applications with 46% fewer job applications in May compared to February.

As the economy has reopened, job applications have flooded back this May. The average job posting on our site in May got about as many applications as one would have in February. However, employer job postings still haven’t fully bounced back to pre-pandemic levels. Nevertheless, for some job categories like restaurants, job applications are booming.