Rumors of a Facebook phone have abounded for years. On April 4, they may finally cease, as Facebook has invited press to “Come See Our New Home On Android.” Facebook will not make its own phone. Instead, reports suggest, Facebook will announce a version of the Android operating system that has Facebook as part of the homescreen and generally integrates Facebook more deeply. 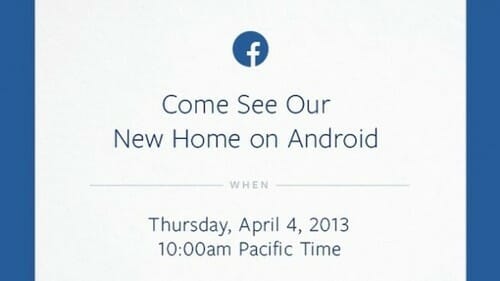 This could be seen as a bold play in Facebook’s mobile strategy. It is also, as Quartz points out, the exact strategy taken by MySpace, a social network that preceded Facebook, when they worked with the phone maker Helio to release a phone that put MySpace front and center seven years ago. Quartz quotes a take on the strategy from this February 2006 article:

“For MySpace, the deal is another move to keep its users bound tightly to it, communicating with friends or listening to music from artists featured on the service. Such innovation should help MySpace avoid the fate of social-networking pioneer Friendster, whose users ended up going elsewhere when it failed to introduce new features.” The article (here) is worth a read as a type of time capsule. It’s jarring, both as a reminder of how quickly circumstances can change and of how events repeat themselves.

A few aspects of the article seem almost quaint. Whereas the shift from web to mobile is perceived as a potential threat to Facebook, the benefit of MySpace’s phone presence for mobile carriers was to usher customers along into the more lucrative world of charging for data plans:

“Wireless users who subscribe to data services typically ring up higher bills than customers who only make voice calls. So Helio’s plan is to use MySpace Mobile as a way to introduce users to their phones’ data features…

“While Helio’s success depends on MySpace users’ reaction to the wireless service, the idea is not without precedent: In Korea, where Helio partner SK Telecom operates the nation’s most popular wireless network, consumers are accustomed to watching live television on their cell phones, as well as snapping pictures and downloading music over the airwaves.”

The article also felt compelled to explain that teenagers use cell phones – a point nobody needs to be told today:

“More than 60 million teenagers now carry cell phones, and most take them everywhere they go.”

There are also reminders of how quickly circumstances can change. Although Google seems dominant today, and MySpace a distant memory, only 7 years ago Google was still chasing Yahoo while MySpace held a large market position:

“[MySpace] has an estimated 55 million users, and MySpace.com is the second-most-viewed-website in the U.S. —- just behind Yahoo, and ahead of Google — and accounts for 12 percent of online advertising.”

But as the thrust of the Quartz article is Facebook’s recycling of a 7 year old strategy as its flagship mobile effort, the article has echoes of the past.

It has become almost cliché – when questioning Facebook’s ability to thrive in the future – to ask whether it will “go the way of Friendster” or “go the way of MySpace” (Facebook’s failed social networking predecessors). It’s bracing to remember that commentators used to say the same about MySpace with regard to Friendster. Referencing MySpace’s move into mobile:

“Such innovation should help MySpace avoid the fate of social-networking pioneer Friendster, whose users ended up going elsewhere when it failed to introduce new features.”

Silicon Valley relentlessly pursues the future. But even here, it seems, we can’t escape the past entirely.