Are people in places across America really that different? Sure we have “Blue States” and “Red States” but in most states votes for the two political parties end up being split around 50/50.

At Priceonomics we’re able to investigate what people buy and how these things vary by region. The people of Alabama and California might be different, but is there any reason to think the products they buy should be that different? An iPad or a Camry works the same in Boston and Austin after all.

We decided to look at car purchases and see how this varies by geography. America’s love affair with cars is well documented – your choice of car reveals not only the features you need a in vehicle, but also what kind of image you are projecting to the world.

It turns out Americans make very different car purchases depending on where they live. The car brands that are popular in Des Moines, Iowa are completely different than the ones in San Diego, California. Do these people not all see the same advertising during football games? How could the preferences be so different?

Your Patriotic Duty to Buy a Car!

We examined our database of over three million cars for sale to figure out where people buy American cars. Of the used cars for sale in a given city, what percentage of them are American brands like Ford, Chevrolet, Jeep, etc. 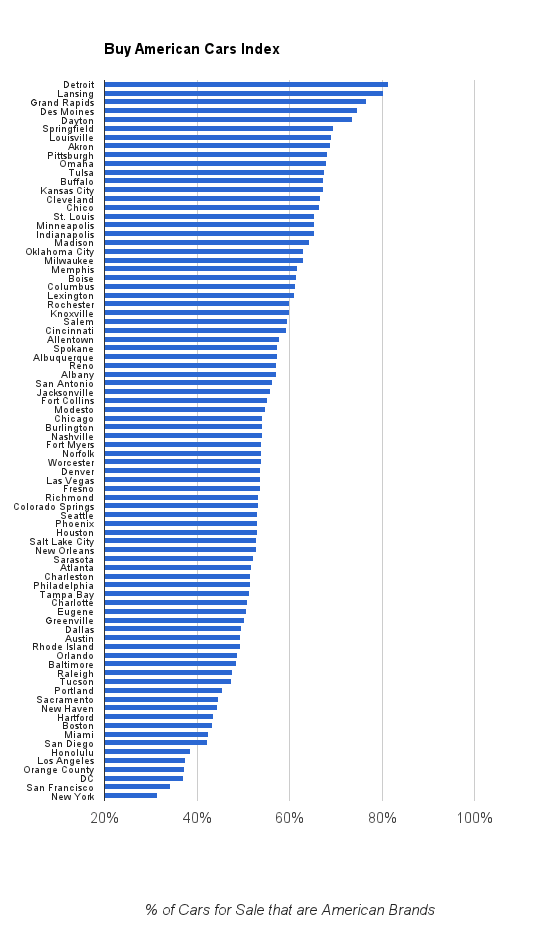 Detroit and Lansing Michigan dominate the American Cars Index with over 80% of cars for sale being American. I guess they know who butters their bread! Similarly, Midwestern cities like Akron, St. Louis, Kansas City and Omaha, and historically industrial cities like Pittsburgh buy American.

By contrast, in New York and San Francisco less than 35% of the cars for sale are American. Even Washington DC doesn’t really buy American. This seems like a good spot for a bailout joke, but in fairness politicians only make up an infinitesimal portion of DC’s population.

The Flipside: Who Buys European and Japanese Cars

Basically, the US cities that don’t buy America cars are the ones that buy European and Japanese ones: 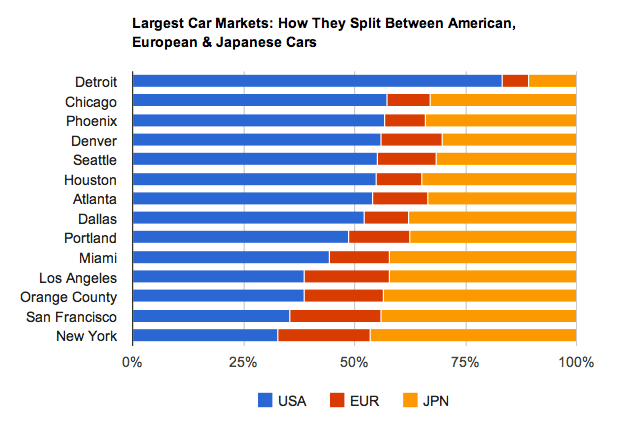 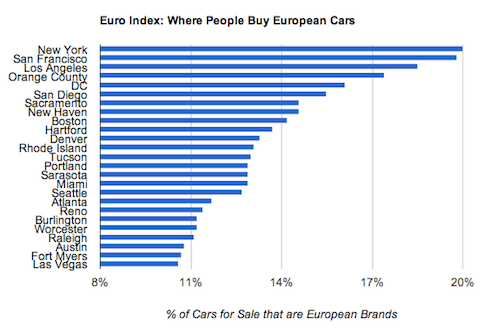 20% of the cars for sale in New York City are European while just 5.8% in Detroit and 4.3% in Lansing Michigan are. A similar story when you look at Japanese car purchases: 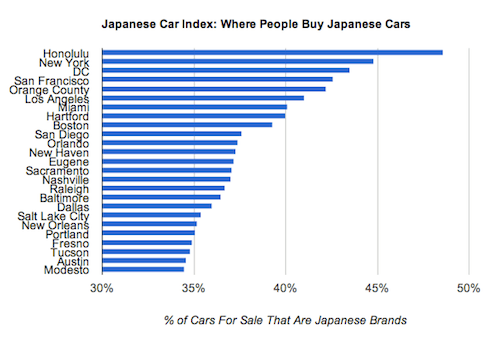 Here Honolulu grabs the top spot in terms of affinity for Japanese cars. The rest of the top contenders are very similar to the places that buy European: New York, San Francisco, DC, and Orange County.

We figured that some places would lean towards “buy American” but that variance in consumptions patterns across the US would be relatively low. It turns out the variance is huge — some places seem to buy only American while others basically don’t. We have no explanation for why that difference exists. It seems like a failure of marketing that Ford can be the top brand in the Omaha but extremely unpopular in Orange County. How could Ford’s sales and marketing operations be so much more successful in one place versus another? It’s the same car!

People all have vastly different car budgets by geography. In Salt Lake City, the median price of a used car for sale is $13,900 while in Allentown, PA it’s only $5,400. The cities that buy European cars aren’t even necessarily the ones that rank high in the Median Price Index. Oklahoma City, for example, buys mostly American cars and its citizens have the fifth most expensive taste in cars. 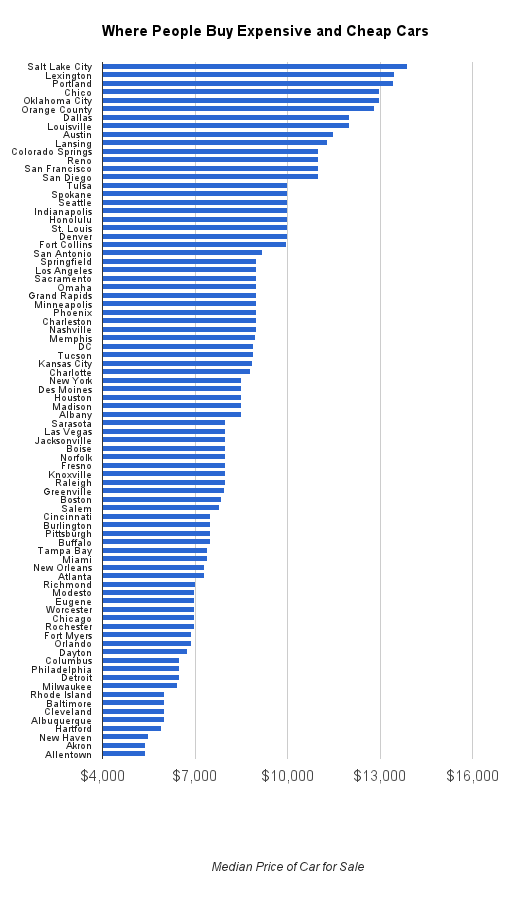 Since we’re on the topic of pricey cars, when we started Priceonomics we looked at buying the domain name Pricey.com. The owner wanted over $1 million! We stuck with our $8 name instead.

We thought it would be interesting to see where Hummers and Priuses were popular. After all, both elicit strong emotions in people (see SouthPark’s “Smug Alert” regarding San Francisco and Prius-owners).

The Prius is most popular in large cities in California like LA and San Francisco. Allentown PA is the Hummer Capital of the US (it was also coincidentally the “Least Hipster City in America” in an earlier analysis). 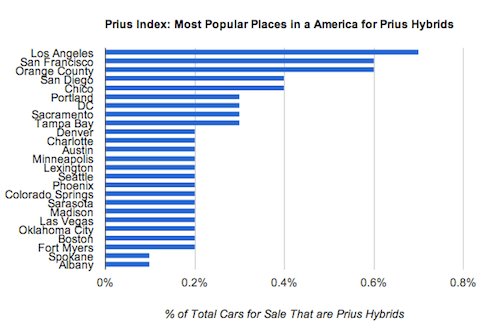 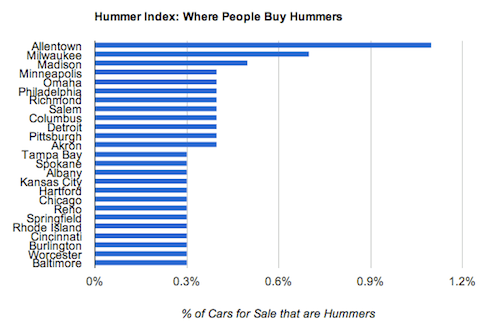 Because Subarus are known as being popular among outdoors enthusiasts, we looked where they rank highly: 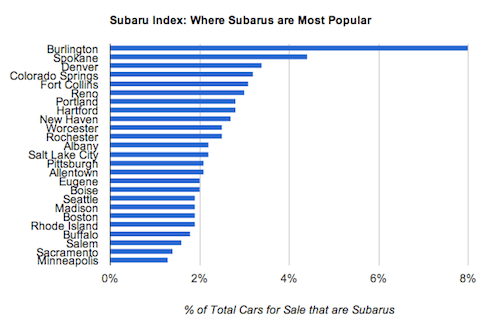 Burlington, Vermont, likes Subarus way better than everyone else in America. Congratulations on your ruggedness!

Bad Grammar Will Cost You

Switching gears slightly, we examined how word choice in used car ads corresponds to price. For example, if you describe your car as a “total piece of crap”, how will its price compare to similar cars not phrased that way?

We categorized the language used into 5 categories: 1) Description of Features 2) Vacuous Marketing Language (“excellent” car) 3) Evidence of a Guilty Conscience (no rust on this car, seriously!) 4) Signal of Desperation (I really need to sell this car) 5) Cataclysmic Events (car is better used for parts). 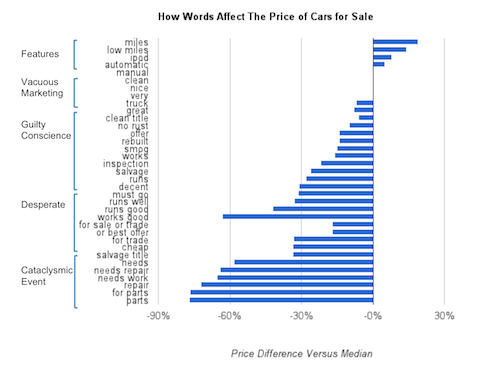 Interestingly, advertising that your car is able to do things that cars are supposed to do like “run” and “pass inspection” are associated with lower prices. Same with offering to trade the car or being open to “best offers.”

One of the most interesting tidbits is that using incorrect grammar appears to have an economic cost. 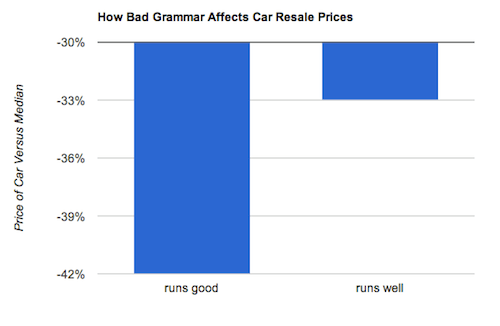 All else equal, it pays to use proper grammar when you’re trying to sell something.

Is it weird that people in Tulsa drive different cars than in New Haven? Is there really any good reason why people in one mid-sized American city drive one brand of cars and a different brand in another? Even today, American branded automobiles might be manufactured in Canada and Japanese branded ones in America. The line between a domestic and an international brand is clearly disappearing over time.

The Internet can spread information about what are the best products and globalize their distribution so anyone can buy them. It would seems strange if the people of Akron refused to use an HTC phone because it was Asian, but that norm still exists in some places for cars. When, if ever, will we all just be buying the same stuff?

We are hiring a front end engineer