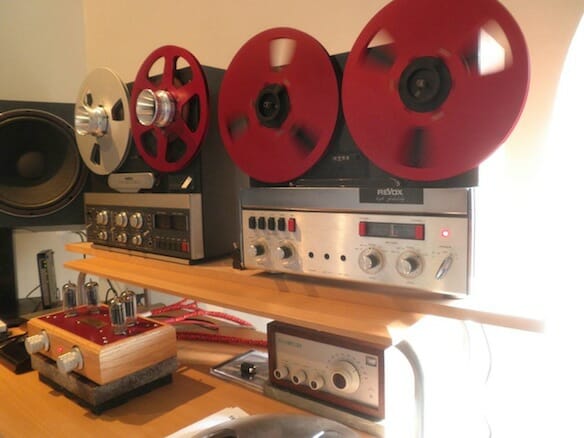 The name, “reel to reel” was not originally applied to this format of tape recording, as it was used universally throughout the sound and film industries as the only available format until the appearance of the cassette, or “compact cassette” was introduced in the 1960s.

Reel to reel recording was introduced in the 1920’s by the German manufacturer Telefunken and developed by BASF as an alternative to wire recording. The technology is a form of magnetic audio recording whereby tape is spooled across a tapehead that telegraphs magnetic signals onto the medium (tape) that can later be unspooled across the tapehead for playback. Interestingly, the first mainframe computers used a similar format to record, process and retrieve data.

Reels: “Reel to reel” refers to the fact that magnetic tape is unfurled from one reel, the “supply” or “feed” reel, fed across a magnetic tapehead, and collected on a “takeup” reel. Tapehead: The magnetic mechanism over which the tape spools that either imprints the recording on the tape, or plays it back.

Tape speeds: Magnetic tape was sped through the original machines at different rates, as it was at higher rates (more tape through the head in a given period of time) that produced greater fidelity of the original performance. Tape speeds ranged from approximately one inch per second to about 30 inches per second. (Tape speeds peaked at 200 IPS in the 1950s, but were superseded by the development of quadruplex technology.)

Single versus Multi-track: Though the original machines just recorded a single track, which could be played back to simulate a live performance, multi-track recorders were developed that permitted different tracks to occur adjacently on the same tape. This opened the door for overdubbing, or putting different performances on the same space of time on a tape. The first multi-track machines were 2-track (stereo) and 4-track, eventually advancing to provide 48 or 64 potential simultaneous tracks.

Machines of the past

As the early machines, being developed by the German company, Gramaphone in the 1930s, had noise and distortion problems, the technology was not considered accurate enough for music recording until the 1940s, when German engineers introduced a high-frequency bias current to the tapehead, eliminating noise. An American audio engineer acquired two German Magnetophon machines in WWII, with tape, and began to develop a design that could be used for commercial purposes. This idea resulted in the first prototype Video Cassette Recorder, developed by Ampex in the 1950s, as well as a multi-track audio recorder, which was used in Hollywood in the late 1940s.

Les Paul, the inventor of a 24-track recording machine, began to record to an Ampex R2R machine in 1948 and went on to make multi-track recordings on their 8-track machine. In the 1960s, inexpensive R2R machines became available for home use, generally featuring the capacity to record a single mono track. Also with the development of tape recording, the first cassette tapes and recording machines were introduced by the Phillips Corporation. Prerecorded R2R tapes were commercially available from 1960-1984. With the development of the compact cassette and eight-track tape formats, in the 1960s and 1970s, the more cumbersome process of recording to R2R format began to fade in popularity, and R2R technology was generally relegated to use by professional recording studios and audiophiles. The advent of digital recording technology, Digital Audio Tape and hard-disc recording, seemed to be the death knell for R2R technology. Not unlike the resurgence in vinyl records, there was a revival of R2R recording and remastering of digital recordings in the 1980s, when a number of pop artists began to use R2R again. A natural preference for a certain amount of harmonic distortion in the low (bass) range, coupled for a slight compression of the high range (treble), both facets of R2R technology, began to emerge in the recording industry.

Machines of the present

Though vintage analog reel to reel recorders remain available, the technology has developed to dovetail with digital recording, digital R2R and hybrid analog/digital R2R machines are now available. The tape medium has been expanded to include various widths, as wider tape, run at a faster speed was demonstrated to provide the optimal signal-to-noise ratio, minimizing harmonic distortion as well as wow-and-flutter-based distortion, which results from inconsistencies in speed.

Sony and Mitsubishi developed digital R2R recorders in the 1980s, which remained popular in the recording industry until the mid 1990s, when it became apparent that despite all the advantages of digital recording, the linear mechanical process of spooling tape could still result in deterioration of the digital content. A line of digital R2R machines was introduced specifically for film. Prohibitive media costs and the emergence of hard-disc recording suspended the development of digital magnetic tape.

Denon, Nagra and Otari, among others, continue to produce and develop analog R2R recorders. Though the available formats of tape for these players has expanded radically, (the ¼” tape on a 7” reel was the most common, excepting 10-1/2” reels used in film,) including ½”, 1” and 2” tape widths, and some older machines require adjustments to optimize performance of a modern tape, these are modern analog R2R player/recorders.

With the general shift from magnetic to digital tape, there was an implosion among the tape suppliers, and as Emtec (BASF) and Quantegy (Ampex) folded, RGMI was the sole distributer of magnetic R2R tape for a short period. Today SONY and ATR remain manufacturers and distributors of magnetic R2R tape, though some older machines, tuned to BASF specifications, will show optimum performance with adjustments to the tapeheads. Many seem to collect these machines for romantic reasons, feeling a sensation of time travel while hearing music produced by spinning reels, while others employ them solely for audio playback performance.