Your Phone Loses Value Pretty Fast (Unless It’s an iPhone)

“It’s probably hard for a Mercedes owner to describe to a Honda owner how attention to detail makes their driving experience better.”

– MG Siegler [on why the iPhone is superior to Android]

“Let’s not let our preferences (and that’s all they are, preferences, not empirical facts) dictate how we think about and relate to other people.”

The empirical facts are in, and the iPhone is wiping the floor with Android and BlackBerry in terms of resale value. 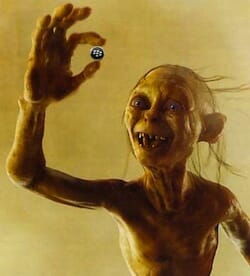 At Priceonomics, we firmly believe that resale value is the best objective indicator of product quality. If you wanted to figure out the best cell phone, you could look at all the reviews, test out all the phones, talk to all the experts, but still your assessment will be subjective. Or you could let the market tell you which phones are the highest quality by seeing which ones best retain their value over time.

Priceonomics phone pricing data strongly indicates that Apple phones are a better value than smartphones on other platforms. The market has spoken, and Android and Blackberrys do not age well.

Car buyers know that depreciation matters. Some cars lose much of their value the second you drive them off the lot. Others cars you can sell after a few years and recoup most of your initial payment. Cars with high resale value have strong demand, high reliability, and happy owners. A high resale value is the market telling you, “this is a good car.”

Because Priceonomics has built the first price guide for used phones, it is now possible to measure phone resale value and depreciation to see what the market suggests are the best phones. We measure depreciation by comparing a phone’s current used price to its new price (without a contract) the day it was released. We examined all iPhone models and the 70 most popular Androids and 30 most popular BlackBerry models. We split phones into five different cohorts (newly released, 1, 2, 3, and 4 year-old phones). We then calculated which phones had the best resale by cohort, as well as which platforms in aggregate tended to retain their value the most.

The highest quality phones should have the best resale values over time and crappier phones should depreciate the fastest. The evidence is clear – the winner is the iPhone. 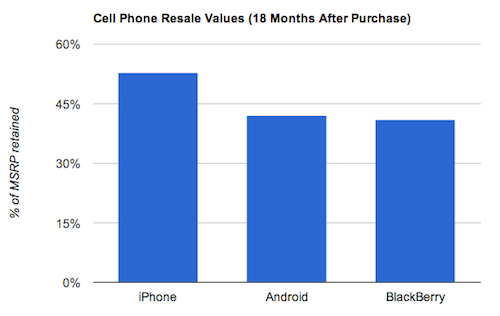 After using your iPhone for 18 months, it still retains 53% versus 42% for Android, and 41% for BlackBerry. That’s $312 of cash value if you resell your old iPhone on eBay or Craigslist.

iPhones have a reputation for being premium products, while Androids have a more democratic marketing angle (BlackBerry’s consumer marketing angle appears to be indecipherable). In fact, the cost of ownership of an iPhone is the lowest of all platforms: 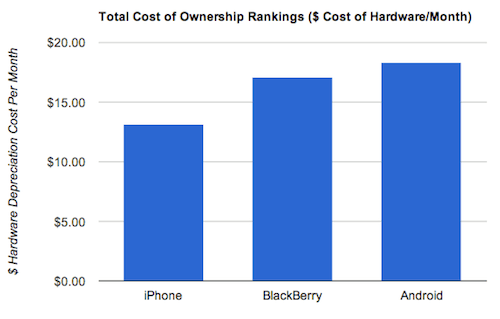 The iPhone hardware only costs you $13.20 per month if you resell it at the end of 18 months. Android phones cost 40% more. Either one seems like a deal compared to a monthly cell phone bill!

Be careful before you drive that Android phone off the lot

Cell phones don’t depreciate linearly over time. They lose a lot of value right away and then gradually less over time. Across all the phones we examined, here’s a chart of how phones lose value over time. 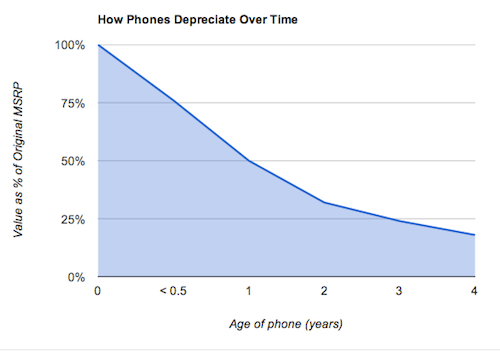 Not all cell phones are created equal. You can buy an iPhone 4S today and sell it a few months later on the secondary market for almost what you paid for it. However, if you buy the latest big fancy Android phone, a few months later it has lost hundreds of dollars in value. 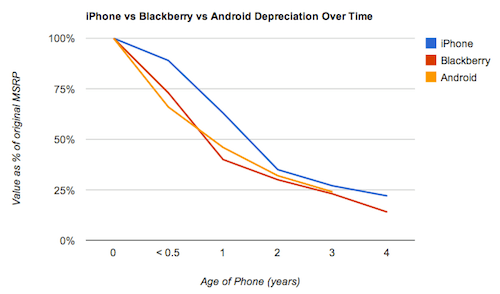 At every stage, the iPhone retains more of its original value than Android and BlackBerry phones. Even four years later, you can sell a first generation iPhone for $110 dollars.

A few of money saving tips

1. There is a diamond in the rough among Android phones. Pre-paid Android phones are relatively inexpensive and hold their value extremely well. The Motorola Triumph, HTC Wildfire, and Samsung Exhibit 4G, for example, retain 86% of the original value on average. These phones appear to be a much better value than the expensive Android phones that are typically nationally advertised.

2. Skip those extra GBs on your iPhone. An additional 8GB of hard drive costs you an extra $100 upfront but only adds $10 to the resale value of your phone. The secondary market doesn’t value extra hard drive space on an iPhone, so get the one with the smallest amount of disk space. 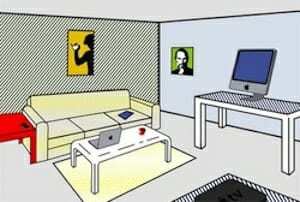 Would it be silly to figure out which cities in America are filled with rabid Apple fanboys, BlackBerry addicts, or Android fanatics? Yes, but we did it anyways!

We examine our data on used cell phone markets to see where these various phone platforms are most popular. We would expect that regions with a high affinity for a particular type of phone should have that type of phone dominate the listings in their marketplace on a percentage basis .

“Never trust anyone under 30 with a BlackBerry.” 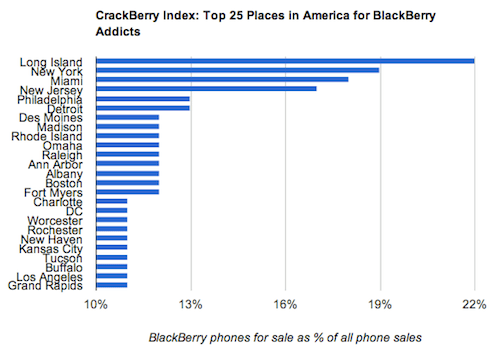 Notably, the places dominating the CrackBerry Index brought us The Financial Crisis, The Jersey Shore, carried interest tax exemptions, and parties where everyone wears white pants. It could be worse, in London BlackBerry users started a huge riot! At least in America BlackBerry use just goes hand in hand with self-indulgence and financial malfeasance. 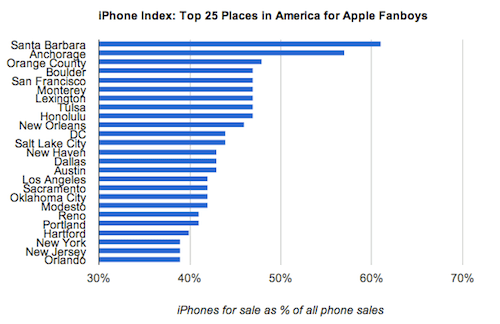 The most iPhone fanatic city in America is . . . Santa Barbara, CA! Coming in as a close second is Anchorage, Alaska and of course San Francisco cracked the top 10. The least iPhone Fanboy city in America is Kansas City, Kansas. Perhaps the people of the city are still resentful their hometown carrier (Sprint) was last to get the iPhone.

You can see the list of the most Android fanatical cities, as well as the full rankings for BlackBerrys and iPhones here.

There is a beautiful and liquid secondary market for phones, and in that market, the iPhone reigns supreme. We built Priceonomics to create data so that consumers could make better decisions. Our data suggests that buying an iPhone is a better economic decision than an Android or BlackBerry. If you buy an iPhone, down the line you will have a piece of hardware that still has economic value.

In irony of ironies, it is BlackBerry and Android manufacturers that need to provide non-economic justifications for purchasing their products. That might explain all the recent Samsung phone commercials full of sound and fury, but signifying nothing.