“Cigarrettes Are No More Addictive Than Gummy Bears”: Redux

In a quote whose infamy will outlive its speaker, a tobacco executive in 1997 claimed that “Cigarettes are no more addictive than gummy bears.”

The quote launched an avalanche of criticism that ridiculed the idea of cigarettes being as harmless as an adorable children’s snack. But fast forward to today and the companies behind gummy bears, Lucky Charms, and countless other salty and sugary snacks are increasingly fighting the same accusations and scrutiny the tobacco industry faces. 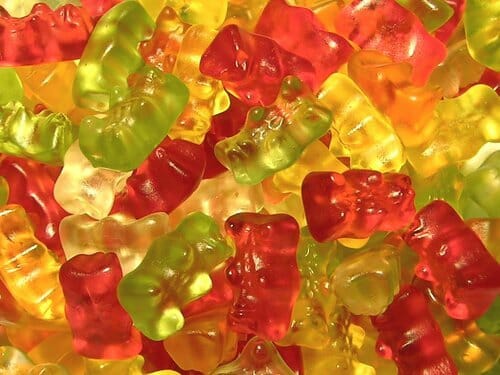 If it seems like hyperbole to compare the dangers of Cheetos and Big Gulps to smoking, consider this: Only two years later, in 1999, industry executives did so themselves. The latest cover story from The New York Times Magazine reveals that the vice president of Kraft Foods began a presentation in front of industry leaders with the following quote from a professor of psychology and public health:

“As a culture, we’ve become upset by the tobacco companies advertising to children, but we sit idly by while the food companies do the very same thing. And we could make a claim that the toll taken on the public health by a poor diet rivals that taken by tobacco.”

As a walk through any grocery store reveals, the executives of Kraft and General Mills and Coca Cola all declined to take an early stance on the health effects of their products.

The author of the cover story is careful not to suggest that sodas and Lunchables are as addictive as cigarettes. But the parallels between criticisms of the two are striking. Could processed foods be the next cigarettes?

At the core of the comparisons are the urgent public health concerns linked to the products:

“The challenge is clear. One million young people between the ages of 12 and 17 take up the deadly habit each year – 3,000 new smokers a day. The average smoker begins smoking at age 13 and becomes a daily smoker before age 15. One-third of these children will die prematurely from a tobacco-induced disease.”

“The evidence is very robust that when we eat more sugar we gain weight and when we eat less, we lose weight. Each 12-ounce serving of soda a person consumes each day raises type 2 diabetes risk by 10 to 15 percent, and many Americans are consuming five or six servings.”

Public health campaigns are commonplace. They warn against drunk driving, encourage regular exercise, and promote seat belt use. But the campaign against smoking became particularly fiere, noted for using the industry’s own marketing creations against them. “The Real Bears” shows the cuddly, soda-binging bears from Coca Cola commercials suffering from diabetes to the point that their feet are amputated.

The government instituted bans on advertising to children, mandated no-smoking zones in most public places, and imposed taxes on tobacco to disincentivize use.

New York City mayor Michael Bloomberg made headlines by banning sugary beverages larger than 16 ounces to curb obesity, while health experts have driven conversation over a “sugar tax” on sodas and other sweetened drinks.

A Product for “Them”

In another infamous quote, a tobacco executive responded to the question of why he does not smoke as follows:

“We don’t smoke the shit, we just sell it. We reserve the right to smoke for the young, the poor, the black and the stupid.”

No food executive has said anything remotely as vulgar or conspiratorial,  but processed foods are increasingly sold to poorer consumers by executives whose families avoid the stuff. In the words of the daughter of the creator of Lunchables – a package of processed crackers, meats, cheese, and candy for children:

“I don’t think my kids have ever eaten a Lunchable. They know they exist and that Grandpa Bob invented them. But we eat very healthfully.”

The ultimate defense of an unhealthy product is that no one is forced to buy it. The consumers make a choice. While the addictive properties of nicotine make tobacco less amenable to this defense, the rhetoric of both camps sounds similar:

“These are adults. They’ve made a choice and they want to smoke — increasingly, actually. You know, you see people, they just want to smoke.”

“General Mills, he said, acted responsibly to both the public and shareholders by offering products to satisfy dieters and other concerned shoppers, from low sugar to added whole grains. But most often, people bought what they liked, and they liked what tasted good.”

Even if it seems incredible now, the criticism of processed foods increasingly resembles the criticism of cigarettes. Are the Coca Cola bears and Twix rabbit today’s Joe Camel and Marlboro Man?