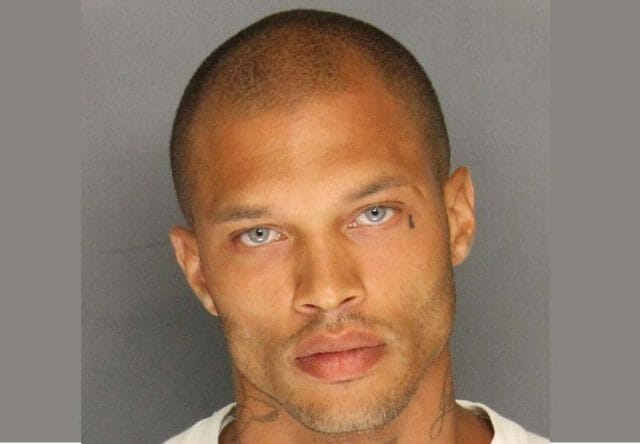 “If you need a place to hide from the police, my door is always open…”

Two weeks ago, Jeremy Meeks was arrested in Stockton, California on eleven felony counts, including weapon and gang-related charges. In Stockton, California, a city notorious for its high crime rates, the arrest didn’t particularly stand out — until Meeks’ mugshot hit the internet.

Instead of being acknowledged as a danger to society, Meeks, who a Stockton officer calls “one of the most violent criminals” he’s ever dealt with, was celebrated for his shockingly good looks. His photo went viral on Facebook, fan clubs were created, and his incriminating tattoos — a teardrop (which often indicates murder), and “NC” (the notorious gang, Northside Crips) — were brushed off as “bad boy cuteness.” In wake of the attention he’s received, Meeks has been offered numerous high-paying modeling jobs, and recently signed on an ex-porn star as his booking agent, all from the confines of his holding cell.

But years of social psychology research indicate that Meeks’ story shouldn’t come as a surprise: it pays to be an attractive felon.

As part of an effort to reduce a recent tirade of shootings and robberies, the Stockton Police Department had conducted a sweep and found high-caliber assault weapons in the possession of Meeks and three other men; as they often do, the authorities posted the criminals’ mugshots on the SPD Facebook page. The photos of the other three, more average looking accomplices drew little attention, but Meeks — with a chiseled jawline, and piercing blue eyes — incited a feeding frenzy of admirers. Within days, his photo went viral, reeling in over 100,000 likes, 12,000 shares, and 26,000 comments ranging from heart emoticons to marriage proposals.

Every major media outline went along for the ride, following the 30-year-old felon’s plight with fanboyish adulation, all the while taking great care to remind us of his unfettered beauty. Less reported was Meeks’ extensive rap sheet: in 2002, he was charged with grand theft and served two years of hard time; in 2005, he was again arrested for identity theft; from 2005-2007, he was detained on five occasions for various gang-related charges and crimes, according to court documents. Meeks is also a documented member of the Northside Gangster Crips, a gang he’s been involved with since dropping out of tenth grade nearly 15 years ago.

Meeks’ fans have even organized a crowdfunding campaign to chip away at his legal fees and $1.1 million bail. In 12 days, 274 people have donated $5,355 in support of the felon: 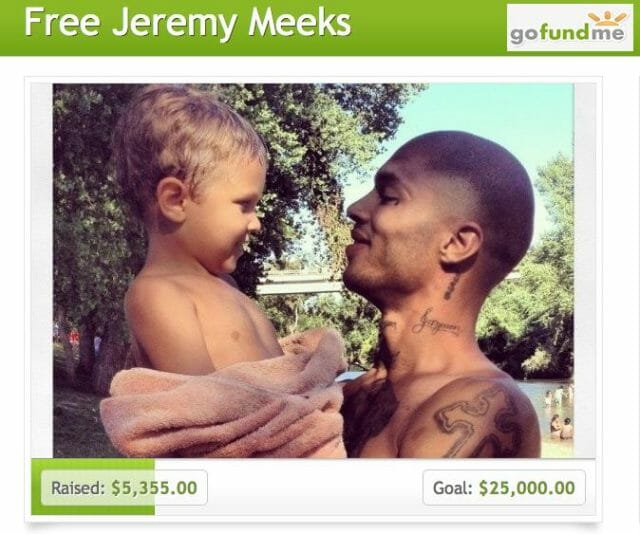 Comments on both the social media pages and funding page claim that Meeks and his perfectly symmetrical face are entitled to exoneration. “Everyone deserves a second chance” writes one supporter, “especially you and those eyes.”

“Donating to good looking people today!” proclaims proudly proclaims another fan, with a $50 transfer. Dayle, a third female funder, agrees: “He deserves money just for being so good-looking.”

What Is Beautiful Is Good

We’ve previously written about the “halo effect,” or, as psychologist Robert Cialdini writes, society’s propensity to “automatically assign to good-looking individuals…favorable traits.” It’s widely known that attractive people enjoy preferential treatment in the workplace, but, as Meeks’ case has proven, even criminals can don a halo. In his best-seller Influence, Cialdini enumerates on the benefits attractive felons enjoy in the legal system:

“Unsettling research indicates that our judicial process is…susceptible to the influences of body dimensions and bone structure. It now appears that good-looking people are likely to receive highly favorable treatment in the legal system.”

The research Cialdini cites is vast and has consistently reinforced the assertion that good-looking inmates are more likely to receive favorable treatment from jurors, judges, and the general public — regardless of criminal histories.

In the 1980 study Defendant’s Attractiveness as a Factor in the Outcome of Criminal Trials (Stewart), a team of researchers systematically rated the attractiveness of 74 male defendants at the onset of their trials. Consistently, the most handsome inmates received the lightest sentences, and were nearly twice as likely to avoid jail time as “ugly” inmates. In another study, researchers staged a series of fake negligence trials — 50% using an unattractive defendant, and 50% using an attractive one — to panels of uninformed jurors. While the unattractive defendants were ordered to pay an average of $10,051, jurors were more far more lenient with the attractive ones, demanding them to pay out an average of only $5,623.

Similarly, a number of reports have explored society’s reaction to crimes committed by violent criminals. In 1975, researchers dictated detailed crime scenarios (including whether or not the defendant was attractive); the panel of participants consistently let attractive criminals slide. A 1991 study appropriately pennedThe impact of litigants’ baby-facedness and attractiveness on adjudications examined the effects of defendants’ facial appearances on judicial decisions in 506 small claims cases. Not surprisingly, attractiveness had a “significantly favorable” impact on the cases’ outcomes for defendants.

From Cell Block to Runway 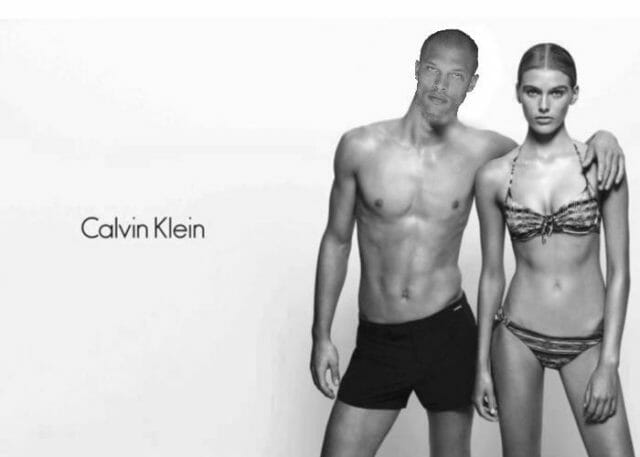 Jeremy Meeks is a poster child for these studies: he has received preferential treatment from society (the other three, less-attractive men, charged with equal crimes, have not enjoyed similar adoration). From his holding cell, Meeks has even received “dozens” of job offers from modeling agencies and talent scouts looking to capitalize on his appeal. Fans have photoshopped his face over Calvin Klein, Gucci, and Abercrombie ads with captions like “what if?” and “shooting his way into my heart.”

The “hot felon” phenomenon didn’t start with Meeks. Four years ago, Meagan Mccullough, a then-27 year old Floridian, was booked on a DUI charge. Her mugshot, subsequently released online, went viral. Overnight, she received interview requests from major media outlets, and began receiving calls, texts, and emails from “many random and bizarre foreign admirers” across the globe. Though Mccullough’s fame arose from criminal circumstances, she embraced it; society wholly glossed over the fact that she’d broken the law. In a chat with Ten Minute Interviews, she expressed her gratitude over the ordeal:

“If none of this ever happened to me, I definitely wouldn’t have been able to take my children on a vacation to Disney World last weekend and for that, I am beyond grateful.”

While Mccullough states she is “not fond of being known solely as a ‘hot mugshot,’” she openly markets herself under the moniker on Twitter (#attractiveconvict), and has stated that she’d gladly pose with Playboy, should Hugh Hefner express any interest. In the wake of Meeks’ ordeal, her fame has been reinvigorated:

“As of lately, people have been comparing me to the new ‘hot mugshot’ Jeremy Meeks and making up photoshopped babies using our images. I get weird updates and articles sent to me daily. He is an actual criminal; I think he is also gang related!!! No thank you, it would definitely never happen and I’m embarrassed to be paired up with that!” 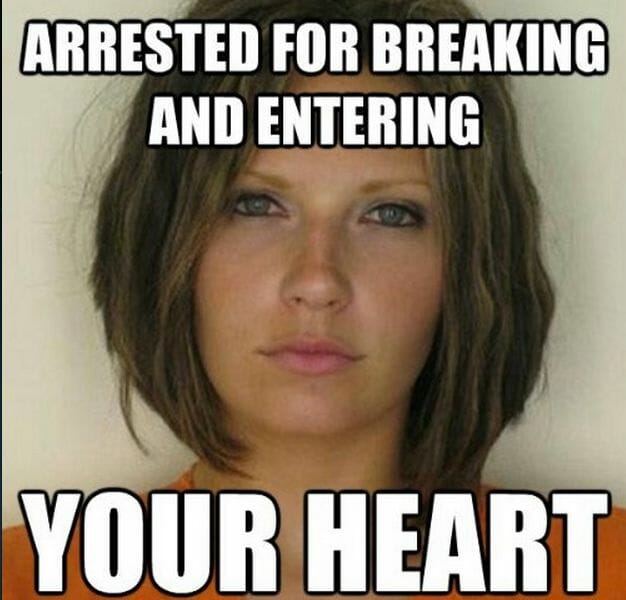 For Meeks, the benefits of his newfound fame will likely come with monetary rewards. This past Tuesday, he signed a contract with Gina Rodriguez, a Hollywood talent agent and ex-porn star, to represent him in the outside world. Rodriguez claims that securing Meeks modeling jobs won’t be a challenge — despite his heavily-marred record, and current incarceration. “Jeremy has an amazing look and has received international attention,” she told ABC News, “which I feel can only help him flourish in the entertainment industry.” She continues, elaborating on what he might expect compensation-wise:

“Jeremy could make somewhere between $3,000 to $100,000 per month through endorsements and modeling. We are also speaking with several production companies about following Jeremy’s foray into the entertainment industry. I believe this can be a positive change for Jeremy and his family…that’s the ultimate rags to riches story.”

Rodriguez is already “in talks” with several prominent modeling agencies, including White Cross Management, which claims that Meeks’ future there depends on whether or not he is released. Some reports, though unverified, are already circulating that she’s secured him a $30,000 gig with LA-based Blaze Modelz (with a “z”).

For the few who’ve remained impervious to Meeks’ baby blue eyes and chiseled chin, the facts of the case have trumped aesthetics. “It’s totally insane and it speaks poorly of where we are,” defense attorney Darren Kavinoky said in an interview. “We are so enamored with appearance and attractiveness that we are willing to totally disregard that we’re talking [about] somebody who is a criminal, someone who has a long rap sheet and a history of convictions.”