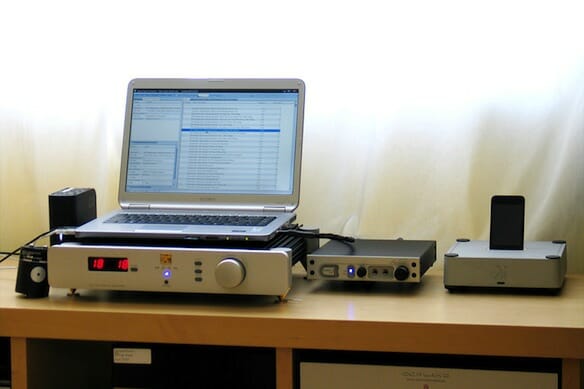 What is a DAC?

A digital/analog (digital to analog) converter takes a numeric input and translates it into a voltage signal output. D/A converters are commonly used with digital audio and video sources to produce sounds and images.

What is a DAC used for?

The most common D/A converters are used by consumers taking signals from music files stored or playing from a computer to produce sound from powered speakers or headphones. Another popular application is to convert digital video files into images. Some DAC units feature integrated amplifiers and power the speakers or headphones directly, while others use asynchronous USB to merely convert USB input into coaxial or optical audio output, which is then processed by an amplifier or television. There are hybrid converters that incorporate vacuum tube amplification technology in the input stages as well as wireless converters for greater convenience and flexibility. There are specifically dedicated or designed DACs that are used for myriad applications in information technology.

One of the more popular uses of DACs is with lossless digital recording formats, such as FLAC, WMA (Windows Media Audio lossless), ATRAC, or Apple lossless audio media, which can be played from a computer or music player. Most computers contain a relatively simple DAC in their sound card, and by using an outboard DAC, and running the converted signal direct to amplification, which negates the integral DAC, higher qualities of sound reproduction may be enjoyed by the listener. There are many who claim to hear greater depths and subtleties in the music that defy quantification.

Fundamentally, most Compact Disc and Digital Video Disc transports have integral DACs. They take the coded numeric information from the CD and translate it into analog output, which is then amplified and produces music through speakers or headphones.

There are outboard and integral digital to analog converters designed to accomplish simple to sophisticated audio and video playback. There are wireless outboard units that plug directly into the docking port of your Apple product and broadcast a signal into a compatible home audio system, or via RCA jacks into any analog sound reproduction system. There are products on the market that act as an iphone, ipad or ipod docking station and wirelessly broadcast HDMI output to your TV or monitor.

A survey of uses reveals there are DACs designed for precision and general practices, from clocking and timing applications to operational amplification and power management solutions. These include bipolar, dense and high-voltage DACs, nanoDACs and industrial DACs. Fortunately for our consideration of sound and video reproduction we will examine those more commonly used for these applications. Priceonomics will simplify your search and find the item for you.

There are three types of USB/DAC interface structures: Synchronous, adaptive and asynchronous. Synchronous, or conventional USB uses one-way data streaming and is considered inferior due to its reliance on the computer’s clock. Adaptive uses the amount of data in the stream and modulates it using a clock in the DAC. Asynchronous USB, the clear preference among audiophiles, uses a feedback loop to create a two-way data stream, in addition to a clock in proximity to the DAC, not relying on the computer clock. It is called asynchronous because the clock near the DAC (usually located in the unit’s housing) is not synchronized with the computer clock.

There are also USB audio classes. USB audio class 1 is not adequate for using many of the DACs on the market to their full potential, being limited to 24 bit/96 KHz maximum sample rate. USB audio class 2 permits a 32-bit/384 KHz sample rate without needing to install other drivers. As of this writing, OSX and Linux operating systems supported USB class 2, while windows-based operating systems only support USB 1, and require the installation of a class 2 driver to achieve the higher sampling rates.

In conclusion, there are any number of affordable DACs for home use, whether specifically just a converter, or in conjunction with a wireless or amplifying unit. A DAC in your signal path is a sure way to increase the quality of sound from any computer-based playback system. There is a great disparity in the field, as is usually the case with sound gear, with DAC price points starting around$40 and going up to around $2000. A good entry-level converter can be had for $100-$200 and be selected according to your wireless and amplification needs. See priceonomics for the latest from the industry.