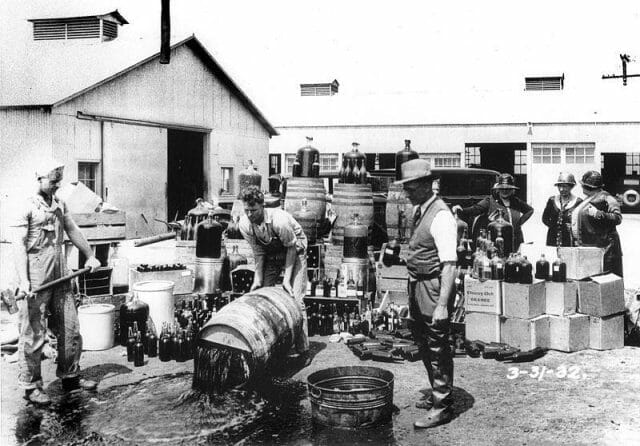 For his time, John Adams drank in moderation. He started every morning with a gill (quarter-pint) of cider to shake off the cobwebs before getting to work. Not to be outdone, James Madison downed a pint of whiskey every day. In the 19th century, alcohol formed a routine part of American life. Businessmen observed the “elevens,” breaking for a daily round of drinks at 11:00am. By 1830, per capita alcohol consumption had reached an all-time high of 3.9 gallons.

This increase in alcohol consumption was at odds with informal social controls at the time that held intoxication to be morally unacceptable. Embodying these views were the words of Increase Mather, a famous early 18th century Puritan minister: “Drink is in itself a good creature of God, and to be received with thankfulness, but the abuse of drink is from Satan; the wine is from God, but the drunkard is from the Devil.”

By the mid-1800s, a strong temperance and prohibition movement had mobilized. States began banning the sale of liquor. In the early 1900s, Prohibitionists ramped up their efforts by lobbying Congress to place a Federal ban on alcohol.

From 1920 to 1933, the Eighteenth Amendment made the transport, production, and sale of alcohol illegal. Presumably, the hope of this “Great Experiment” was to deliver the United States to a teetotaling, more morally upright future.

The beginning seemed promising — in 1921, the annual per capita consumption of alcohol dipped about 75% to 0.2 gallons, down from 0.8 gallons in 1919. However, by 1929, per capita consumption had steadily risen to 1.3 gallons. In other words, within a few years of the 18th Amendment being ratified, alcohol consumption returned to pre-Prohibition levels.

Today, the annual per capita consumption of alcohol in the US is 9.4 liters, or 2.5 gallons. It is important to note, though, that the current consumption levels are nowhere close to the 3.9 gallons consumed per capita in 1830.

As many scholars have remarked, the Prohibition led to unintended consequences best summed up by the expression “the road to hell is paved with good intentions.” In “Organised Crime, Mafia, and Governments,” for instance, economist Annelise Anderson wrote:

“Prohibition was a major impetus for the growth of mafia organisations. Prohibition created the potential for a major illegal market in alcohol, and it is to the years of prohibition that America can trace the growth in scope and power of its mafias.”

Another possible unintended consequence of Prohibition was the rise of incarceration rates in America. As noted by economist Mark Thornton in “Alcohol Prohibition Was a Failure”:

Analyzing the consequences of Prohibition — and their relevance to the criminalization of marijuana and the war on drugs — is a large task with plenty of room for debate. Ultimately, though, Prohibition was repealed in 1933 via the 21st Amendment without having made much of a dent in drinking rates.

To get occasional notifications when we write blog posts, sign up for our email list. Photo credit for Jameson image: Maureen.