Digging Around In The Google Graveyard 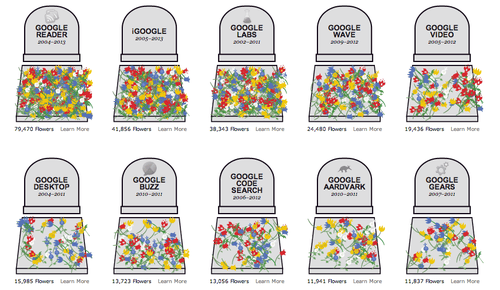 It’s free and a solid product. But after the discontinuation of the popular Google Reader, consumers are hesitant. They fear relying on an app that could be axed at any moment. As Atlantic blogger James Fallows explains:

“Here’s the problem: Google now has a clear enough track record of trying out, and then canceling, ‘interesting’ new software that I have no idea how long Keep will be around. When Google launched its Google Health service five years ago, it had an allure like Keep’s: here was the one place you could store your prescription info, test results, immunization records, and so on and know that you could get at them as time went on. That’s how I used it — until Google cancelled this ‘experiment’ last year. Same with Google Reader, and all the other products in the Google Graveyard that Slate produced last week.”

As Fallows alludes to, the death of Google products has become so commonplace that Slate produced a Google graveyard for people to mourn the loss of their favorite products (image above).

Our list of products and dates is available here – let us know of products that we are missing. Also note that this figure is inexact as we used the year in which Google launched and killed the products rather than the exact date, rounding up. So a product launched and discontinued in the same year had a shelf life of 1 year.

Since Google Keep’s purpose is saving time and staying organized, people have reason to be nervous. There is a good chance that they will have to transfer everything off Google Keep in less than 5 years.

Since we had the data, we also decided to look at the frequency at which Google shut down products: 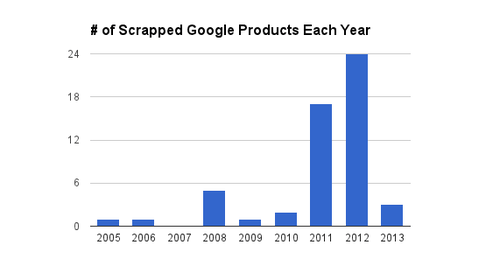 The graph shows the impact of Google co-founder Larry Page taking over the CEO role in early 2011. Before becoming CEO, Page met with Steve Jobs, who advised him to “focus” the company on its strengths. This had been a key of Jobs’s return to Apple, when he found too many teams working on various projects that lacked coherence. In response, he discontinued products and imposed a simple, 4 quadrant system to decide which projects to pursue: 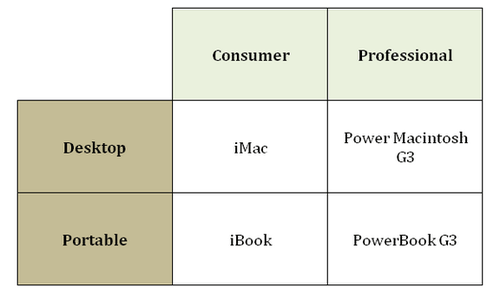 Although Google continues to experiment, it looks like Page took Jobs’s advice. The trick is to figure out whether a new product is part of Google’s focus, or 4.85 years away from the Google graveyard.