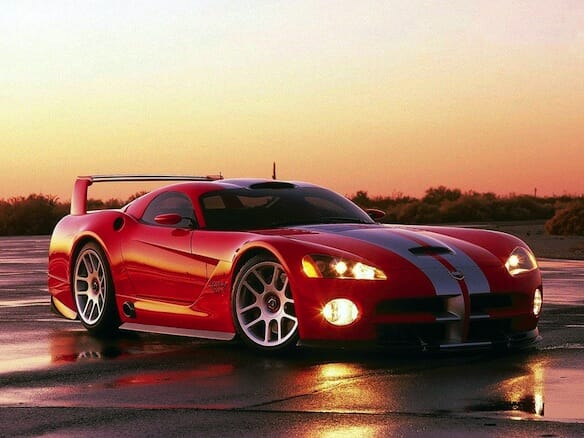 The Dodge Motor Company actually started as the Dodge Brothers Company in 1900. Believe it or not, John and Horace Dodge were actually working on producing engine and chassis components for automobile manufacturers such as Ford. The Dodge brothers discovered great success, but their true dreams were to make automobiles. In 1914, the Dodge brothers incorporated as the Dodge Brothers Motor Car Company. The Dodge reputation for quality was so widespread that 13,000 dealers asked to become Dodge agents before anyone saw the car. The Dodge brothers decided to produce a high-quality car that would sell for about $800 and cheaper than the Model T. In 1914, Horace created the new 4 cylinder Dodge Model 30. This was basically set to be an up scale Ford Model T with features such as an all-steel body, a 12-volt electrical system, and a 35 horsepower motor. With the Model 30, the Dodge Brothers now earned themselves a reputation building cars, as well as parts, although production for 1914 was only 249 units. The following year, Dodge offered a two-passenger roadster increasing sales to 45,053 by the end of the year. Dodge Brothers cars continued to rank second place in American sales in 1920. However, the same year, tragedy struck both Dodge Brothers, and both died due to sickness.

Throughout the 1920s Dodge gradually lost its ranking slipping down to 7th in the U.S. market. In 1925 the Dodge Brothers company was sold by the widows to the investment group Dillon, Read & Co. for $146 million. Despite new ownership, Dodge Brothers’ sales had already dropped to seventh place in the industry by 1927, and Dillon, Read began looking for someone to take over the company. In 1928, Dodge was sold to Chrysler Corporation.When Walter P. Chrysler bought Dodge in 1928, he truly saved the automaker from going out of business. Under Chrysler, the Dodge car had been a sales success because it already had a reputation for quality and durability, but was priced $100 above the Model T. With the new addition of Dodge, Chrysler now had four major car lines and instantly became the third largest automaker. In 1930, Dodge took another step up by adding a new eight-cylinder line to replace the existing six-cylinder. The Dodge line was restyled in the “Wind Stream” look for 1935. Dodge over the next few years severely changed their lineups over and over. Another major restyle arrived for the 25th-anniversary 1939 models, called the “Luxury Liners”. Then completely redesigned with new bodies for 1940, again in 1941, and again in 1942. Why 1943? The attack on Pearl Harbor forced the shutdown of Dodge’s assembly lines in favor of war production in February 1942.

Dodge After The War

After being shutdown in 1942, production at Dodge was restarted by late 1945. Just like every other automaker after the war, Dodge sold light revisions of its 1942 models. As before, there was a six-cylinder model with two trim levels. In 1953 Dodge introduced its first V8 Hemi. The new 1953 bodies were smaller and based on the Plymouth. Dodge struggled over the next few years as they introduced the Dart to battle against Ford, Chevrolet and Plymouth. The result was even worse sales. Dodge today is well known for its muscle car market of the late 1960s and early 1970s. Along with the Charger, models like the Coronet R/T and Super Bee were popular with buyers seeking performance. The pinnacle of this effort was the introduction of the Challenger coupe and convertible in 1970, which offered everything from mild economy engines up to the wild race-ready Hemi V8 in the same package. Although the muscle car craze seamed to be thriving, the 1973 oil crisis caused significant changes at Dodge, as their lineup was seen as inefficient. Despite this, in 1979 when Chrysler’s new chairman, Lee Iacocca, requested a federal loan, Chrysler quickly set to work on new models that would leave the past behind. The first new car was the Dodge Aries. This front-wheel drive car was the first of new models at Dodge during the 1980s. including the Dodge Caravan. The Caravan not only helped save Chrysler as an American automaker, but also introduced the minivan.

Throughout the 1980s and 1990s, Dodge was known as the sporty-car division due to a success of high-performance and aggressively styled models including the Daytona, mid-sized 600 and several versions of the Lancer. In 1992, Dodge introduced the Viper, with a V10 motor and exotic looks. In 1998, Chrysler Corporation merged with Daimler-Benz AG to form DaimlerChrysler. With the merge, Dodge became DaimlerChrysler’s low-price division as well as its performance division. The Charger was launched in 2006 and the Challenger in 2008, with styling of the original 1970‘s proving to be a great success. As if they haven’t made enough changes over the years, in 2007, DaimlerChrysler Split, and again in 2009, joined Fiat forming the “New Chrysler”.

Dodge In The Future

Dodge will get a new compact sedan for 2013, replacing the Dodge Caliber. As part of its rescue package from the federal government, Chrysler agreed to build a 40-Mpg vehicle which is this replacement. The compact will help establish Dodge as a fuel-efficient automaker, unlike its past. Besides this new approach for a new vehicle, Dodge has a new lineup of restyled and updated vehicles.

Avenger: The Dodge version of the Chrysler 200 is due to be replaced in 2014 model year by a mid-sized sedan.

Journey: The Journey is scheduled for a major change in 2014.

Charger: This year the Charger got an eight-speed automatic transmission from Germany. No major changes schedules for the new Charger.

Viper: The redesigned Viper was was brought back and launched this year. A Refresh is schedules for 2015

Grand Caravan: Under Chrysler’s new minivan pricing strategy, the Dodge Grand Caravan is geared to the under-$30,000 market while the Chrysler Town & Country caters to the luxury minivan segment above $30,000.

Nitro: The Nitro saw its last days, and focus is being given to its twin, the Jeep Liberty. No replacement is set or schedules as of now.

Durango: Redesigned last year, the Durango remains unchanged until 2014. An eight-speed automatic transmission is rumored to be available in the Durango and its Jeep Grand Cherokee sibling.

Small Van: A van based on the Fiat Doblo that will target the Ford Transit Connect. Sources say the van is delayed but still on track and now is likely to appear in 2013 as a 2014 model.

SRT: Chrysler Group’s performance brand won’t get another new vehicle in its lineup until 2016 but will get new refreshes of three existing vehicles in 2014.