According to psychiatrist Jeffrey P. Kahn, beer “gave us civilization.”

He argues that our herd instincts – to follow a social hierarchy, not offend others, and work for the collective good – allowed humans to survive and succeed evolutionarily. But to do more than just survive, to produce skyscrapers and Shakespeare, humans needed something to help them overcome their social restraints:

“But then, these same lifesaving social instincts didn’t readily lend themselves to exploration, artistic expression, romance, inventiveness and experimentation — the other human drives that make for a vibrant civilization.

There is evidence that beer, Kahn adds, was made as early as 10,000 years ago – before the invention of bread.

It’s a bold claim. Without a group of sober and tippled cavemen to run experiments on, it’s also probably impossible to prove or disprove.

But today different peoples drink at very different rates. Is there any relationship between drinking and civilization? Here is a graph from The Economist on the liters of alcohol imbibed per person by country: 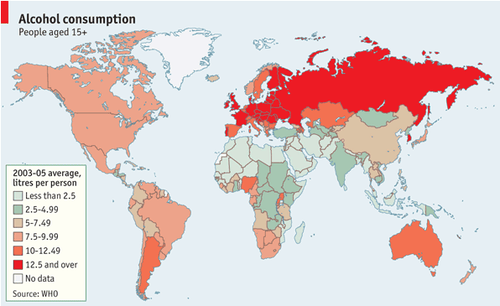 While poorer countries generally drink less and richer countries more, the outcomes do not simply reflect people’s ability to afford booze. Drinking (per capita) is highest in Moldova followed by the Czech Republic. More generally, former Soviet states have the highest rates followed by European countries. America and Canada only drink at a rate comparable to Mexico and South Africa. So are former Soviet states the world’s most civilized?

Unfortunately no one has a “civilization index” by which to rank countries. (Although the French likely invented the word civilization.) Apparently it’s difficult to measure and combine cultural, artistic and scientific achievement. And no dataset exists on artists per capita or funding for the arts internationally (we looked). But we can look at technology and research: 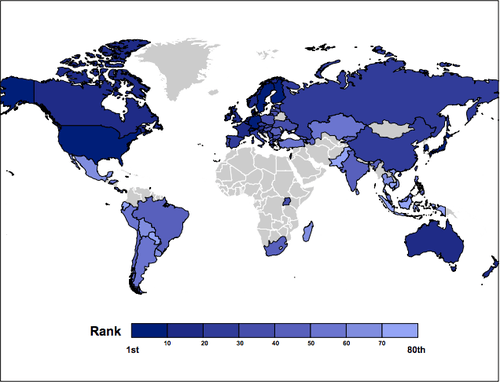 The above map (pdf), the Global Technology Map, combines countries’ patents per capita, researchers per capita, and R&D as share of total economic output into one metric to measure countries’ technological capacity and innovation. The top finishers are Finland, Japan, the United States, and Israel. Africa and the Middle East are the laggards. Russia ranks 28th, China 37th, and India 49th.

Drawing conclusions about causality from these two maps, where there are a million other factors to consider, would make a researcher cringe – even if we are just having a bit of fun. However, it is worth noting that the Middle East and North Africa, where drinking is a cultural taboo, underperform in the index for their level of economic development. There’s no shortage of reasons to explain this: war, lack of female empowerment, pernicious effects of oil, sectarian violence. Nevertheless, maybe it’s time to add a lack of good bars to the list of hypotheses?

But as Dr. Kahn points out, much of the world is drinking too much:

“Part of beer’s virtue in ancient times was that its alcohol content would have been sharply limited. As far as the research has shown, distillation of alcohol to higher concentrations began only about 2,000 years ago.”

If people only need a small bit of alcohol to overcome their social restraints, the impetus for civilization is available almost everywhere in the world. As The Economist shows here, a beer can be bought nearly anywhere in the world at a price representing 50 minutes of work or less: If beer played a crucial role in civilization’s development, it likely played its role thousands of years ago. According to Charlie Bamforth of the University of California Davis:

“Beer is the basis of modern civilization. Because before beer was discovered, people used to wander around and follow goats from place to place. And then they realized that this grain [barley] could be grown and sprouted and made into a bread and crumbled and converted into a liquid which gave a nice, warm, cozy feeling. So gone were the days that they followed goats around. They stayed put while the grain grew and while the beer was brewed. And they made villages out of their tents. And those villages became towns, and those towns became cities. And so here we are in New York, thanks to beer.”

This is good news for America. Because if beer = civilization was a linear function, it would be another piece of evidence for Chinese ascension over the United States. In 2010, as The Economist reported, the Chinese market for beer surpassed America’s to become the world’s largest: 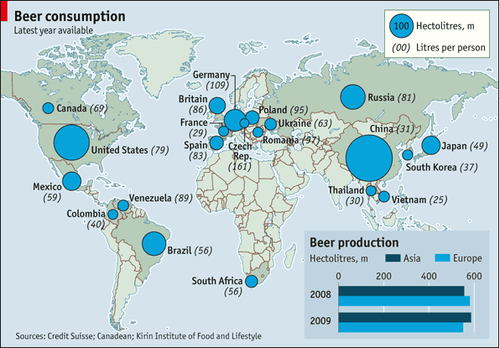