Does Sugar Help You Focus? The effect of puns on willpower has yet to be scientifically proven (RundiesRoom.com)

The conventional wisdom, backed up by research, is that sugar helps you focus. A commonly cited test-taking hack is to pack a sweet snack along with your number-two pencils. As your attention starts to flag and your willpower starts to wane, take a bite.

“In times of dire need a quick shot of sugar can […] make all the difference,” The Guardian reports. The idea is that willpower — or the energy to make yourself do something difficult — is a limited resource. And it feeds off of sugar. If you deplete your willpower, say, by grinding away on the first half of a long test, it’ll need “replenishing”. The glucose in a sweet snack will put the wind back in your sails, and you’ll do better after that.

Though it sounds like a scam concocted by Big Candy to boost revenue in SAT season, this strategy is actually supported by a wide body of scientific research. One such study is titled “Self-Control Relies on Glucose as a Limited Energy Source: Willpower Is More Than a Metaphor”. As part of this study, subjects were given a bunch of self-control tasks in a row. Those who got a sugary soft drink between tasks did better on subsequent tasks than those who got a non sugar drink.

As The Guardian points out, this leaves dieters — who need their willpower to help avoid eating sugary snacks — in a catch-22. For everyone else, it seems like a pretty good deal. You get a better grade and you get to eat chocolate!

But there’s just one problem: A recent study revealed that sugar only works to maintain your willpower if believe you need it. What’s more, you’re better-off believing in yourself instead.

The effect of sugar on performance seemed very real, but these researchers were suspicious of the way it worked. “Given the centrality of cognitive performance and self-regulation for human functioning and welfare in general,” their paper reads, “it would be striking if these functions were so fragile as to depend to a significant extent on the short-term ingestion of glucose.”

One theory the researchers had was based on previous research that indicated many people believe willpower was a limited resource. This belief could lead people to become dependent on glucose. 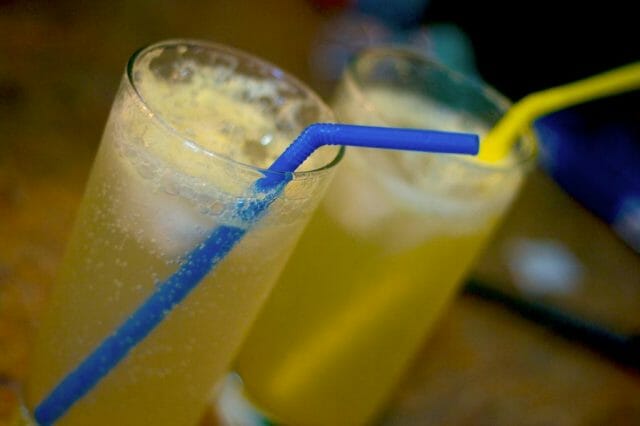 In order to test the hypothesis, they whipped up a few batches of lemonade.

Then, they gave these subjects one of two kinds of lemonade, and then a common self-control test.

Half of the subjects were given lemonade made with sugar, the other half were given lemonade made with 0-calorie artificial sweetener. This is how you administer a placebo or “sugar pill,” when the substance being studied is itself sugar. (The researchers noted that “the subjects could not detect whether they had consumed a sugar or non sugar beverage.”) Higher scores indicate worse self-control, people with a “limited willpower” attitude have much less self control in the “No Sugar” condition; Data source: Dweck et. al.

All in the Attitude

Psychologist Carol Dweck — famous for her research in growth-mindset education — was one of the authors of the lemonade study. She has said this study shows that a limited mindset about willpower makes people distracted and vulnerable, magnifying minor complaints into real problems:

“When you have a limited theory of willpower, you’re constantly on alert, constantly monitoring yourself. ‘Am I tired? Am I hungry? Do I need a break? How am I feeling?’ And at the first sign that something is flagging, you think, I need a rest or a boost.”

This finding built upon other research showing that only people who believe their willpower is limited get worse at tasks as time goes on. The good news is you don’t have to think this way. You can keep being a slave to your stomach, or you can work on adopting a better attitude towards willpower.

“We’re not saying people don’t need fuel for strenuous work, they just don’t need it constantly,” Dweck has said of the study. “People have many more resources at hand than they might think.”

The bad news? If you successfully develop a “plentiful willpower” mindset, you’ll no longer have an excuse to eat so much candy.