For the first time since the recession began in 2008, the number of company-sponsored H-1B visa applications in the United States exceeded the allotted quota of 85,000 slots. 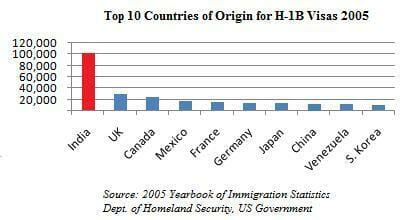 The H-1B visa allows highly-skilled foreigners in fields like IT and medicine to work in the United States for 3 years under the sponsorship of the company that hired them. It can be extended 3 additional years.

Although it is well known that the process can be competitive and that you must apply on the first day that applications are accepted (April 1 this year), Citizen and Immigration Services has not needed to use a lottery since 2008. This is seen as indicative of rising business confidence since companies must sponsor new hires. 124,000 foreigners applied before Citizen and Immigration Services stopped accepting applications.

The justification for the quota in the land of “Give me your tired, your poor…” is the protection of American jobs from foreign competition. However, given that companies sponsoring employees for H-1B visas must pay legal fees and face the uncertainty of a star employee suddenly disappearing, it’s hard to believe that companies are bypassing qualified American candidates on a mass scale.

Discussion among American congressman on immigration reform has included proposals to raise the quota to meet rising demand and eliminate the lottery.

As the American economy recovers, companies will look to hire well-educated Americans and foreigners. Reform in Washington matters because it could be the difference between infusing our recovery with the human capital of these highly-skilled foreigners (many of whom received their education in the US) – or leaving their dreams of working in America up to the odds of a lottery.