Egyptians Want to Shoot Their President into Space

Egypt’s April 6th Youth Movement has taken protest to where it’s never been before: space.

Egyptians have been protesting for over two years, first against dictator Hosni Mubarak, then against the interim rule of the military, and now against their new president Mohamed Morsi. Protests have mostly taken the form of sit-ins, street marches, and general strikes. More creative tactics include street theater and setting up projectors to play videos of government abuses.

Axe, the company of testosterone-fueled shower gel, teamed up with the space tourism company Space Expedition Corp to hold a competition to attend “Global Axe Space Academy.” Entrants to the poll who get the most votes receive space training at the academy, and the 22 trainees chosen most fit for space travel by a panel of judges get shot up into space. Axe and Space Expedition Corp even grabbed Buzz Aldrin to be part of it. 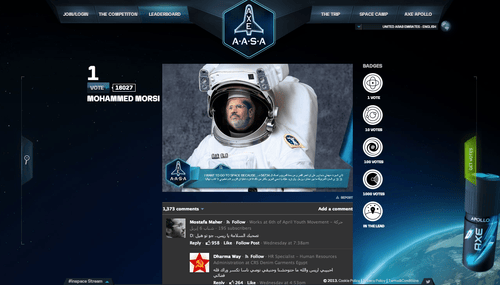 In response, April 6th, an opposition group, entered President Morsi under the tag line “I want to go to space because I completed my mission.” It references NASA’s love affair with variations of the “mission accomplished” line, but particularly points to Morsi’s penchant for declaring that his presidency has accomplished all its objectives – despite the perceived lack of change in Egypt.

The campaign to send Morsi to space went viral and he quickly jumped to the top of the standings with over ten thousand votes and counting.

Online polls and competitions may seem like a good way to garner publicity and involve customers (or in the government’s case, constituents), but as Stephen Colbert has demonstrated, campaigns to prank the polls can easily go viral. He has won competitions to have a bridge in Budapest, a junior hockey team mascot, and a node of the international space station all named after him.

Colbert graciously allowed the contest holders to choose a different name. But if the results of a vote are really important, you probably shouldn’t let the Internet vote.