Europeans vs Americans: Who Clicks on Ads the Most? 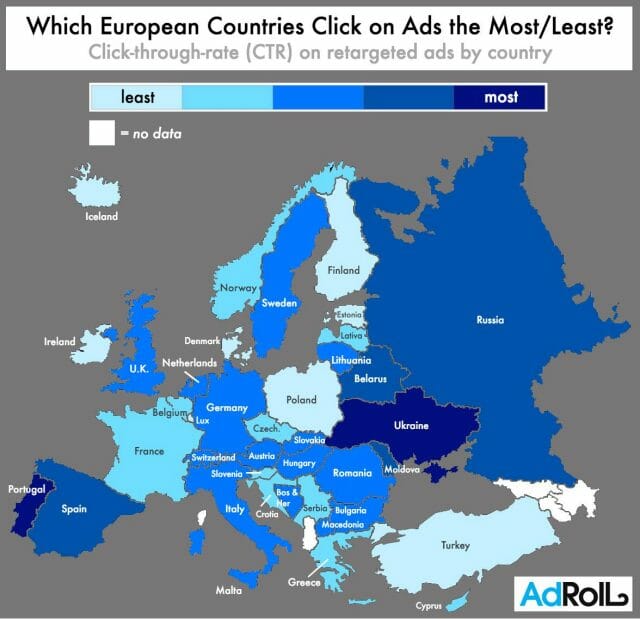 Several weeks ago, we dove into U.S. advertising click-through data (provided by Priceonomics customer AdRoll) and charted which states and cities click on ads the most. We found that people in the southern U.S. states generally click through at much higher rates than those in western states. But what about other parts of the world and how do they compare the the United States?

To figure that out, we worked with AdRoll to do a similar analysis for Europe. We had them compile aggregate click-through-rates of residents in capital cities (based on partial IP address) where there was enough click data for it to be statistically relevant. Then, we used this data to create a simple “click-through index” (10 = most likely to click on ads, and 1 = least likely to click on ads). Here’s what we found.

Residents of Lisbon, Portugal click through on ads the most — by a landslide. At the other end of this spectrum, people in Dublin, Ireland click on ads 5x less commonly than those in Lisbon — and more than 2x less than any other country’s capital we analyzed. Bern (Switzerland), and Reykjavik (Iceland) ranked considerable below average as well.

Next, let’s take a look at country-level data. Below, we’ve ranked the 39 European countries we had data for, along with the United States, just for comparison’s sake. Some countries excluded due to insufficient data; United States included for reference

Portugal tops the list again, but this time it’s followed by Ukraine, Moldova, Russia, and Belarus — all Eastern European countries.

European countries feature a much wider disparity in CTR than the United States. In the U.S., there was only a 3.4 point gap between the state with the highest CTR index (Mississippi, 10.0), and the lowest (Utah, 6.6) — whereas, in Europe, there is a 6.1 point gap between the top (Portugal) and bottom (Finland).

Aside from Spain and Portugal, it’s clear from this data that those in Eastern Europe click on ads at a higher rate than the rest of the continent.

Averaging out our index numbers for countries in each region (Eastern, Southern, Western, Northern) confirms this. 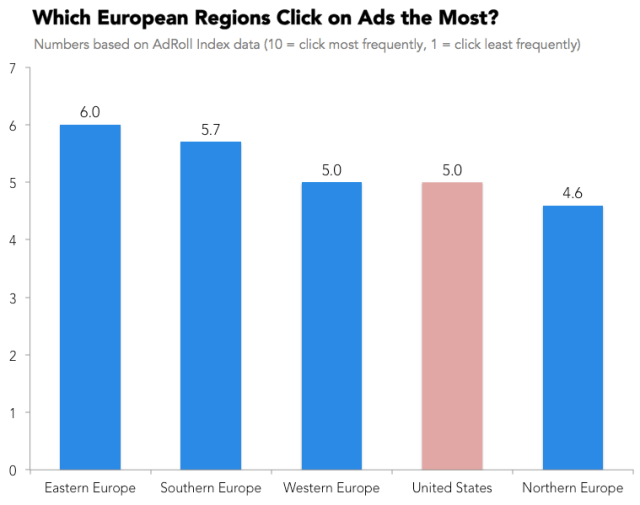 Interestingly, three of four regions in Europe click on ads at a rate equal to or greater than that in the United States. The exception to this is Northern Europe (Denmark, Estonia, Finland, Iceland, Ireland, Latvia, Lithuania, Norway, Sweden, U.K.), where people click on ads about 8% less than Americans, on average.

This is most likely due to the difference between Eastern and Northern Europe in rates of internet penetration and broadband access. According to the Internet Society’s Global Internet Report from 2014, 60 to 80 percent of Eastern Europeans have access to the internet. In Western Europe internet adoption rates are 90 to 100 percent, which is very similar to North America.

Of course, there are multiple ways to interpret the data. As we noted in our previous post, CTR is only one of many metrics used by AdRoll when determining the success of a digital advertising campaign. Still, when it comes clicking on ads, Europeans and Americans are not so different.