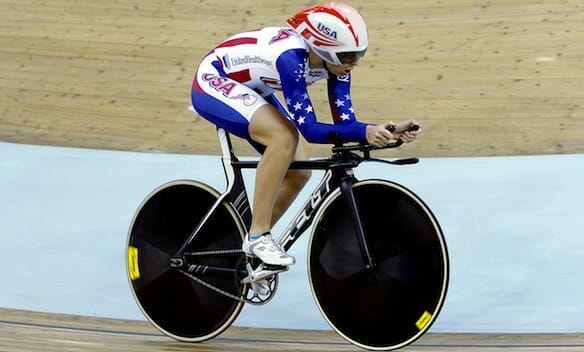 Even seen those SAAB commercials? You know the ones, where the Swedish Air Force jets are poised behind the latest SAAB sedan or sports car, and the tagline is “Born from Jets”? Well, Felt Bicycles has the same kind of vintage. They were born of speed and for speed.

Back in the late 1980s an established motocross star, Johnny O’Mara, was ahead of his time and did triathlons as a way to cross-train. He asked his trusted motorcycle mechanic, Jim Felt, to build him a fast bike. Really fast. Felt himself had been competing in bike races and tris, so he knew a thing or two about what to do. The immediate results were impressive: O’Mara won the 1990 California State Championship in the time trial. Felt himself made the podium in his age group Bud Light Triathlon in Barstow, CA.

People took notice, and soon Felt was approached by Easton and hired on as one of its first product engineers for its bid to enter the bicycle world. Felt’s first charge: develop a bike for Paula Newby-Fraser, the three-time Ironman champion. No pressure, right?

Felt delivered something called the “B-2” for its resemblance to the U.S. Air Force stealth bomber. (SAAB called, they want their tagline back!) Newby-Fraser chalked up her fourth Ironman victory in 1991 aboard Felt’s creation, and his entry into the bicycle world was sealed. Over the next few years Felt designed bikes for Easton used by icons like mountain biker John Tomac and duathlon star Ken Souza.

In 1994 Jim Felt parted ways with Easton and launched his eponymous bike company through a partnership with Answer. An early match was with the Nutra-Fig racing team that saw success in U.S. Tour DuPont races with rider Chris Horner. Over the next seven years Felt’s connections and reputation grew. He was known as an innovator and firm believer in the power of marrying new technologies to bicycles. In 2000, Felt and Answer ended their partnership.

The path forward was unclear, and Felt might have vanished from the scene if not for a new partnership that included Bill Duehring and Michael Müllmann. Duehring and Müllmann were bicycle industry veterans who also had impressive experience and success in the international bike arena. From sourcing to manufacture to marketing, Felt could hardly have found better or more connected or visionary partners. They saw the opportunity to expand the prestigious name into a broader offering of road and tri bikes, BMX, mountain bikes, even cruisers and commuter bikes. They also had plans to make Felt a truly international brand.

Today, a decade after this partnership began, Felt continues to offer finely designed and produced bicycles that cover the waterfront of models – from the primordial time trial and tri bikes, to fixed-gear, cruisers, road racing, and mountain bikes. The Felt product line comprises more than 100 models and is distributed in more than two dozen countries. It has its HQ in Irvine, CA but also a European bricks and mortar office.

Felt is a firm adherent to innovating and applying the latest materials technologies with creative design ideas. Its company website has pages of diagrams and descriptions that explain its creations and proprietary methods. From the early days, Felt used extensive wind tunnel testing and continues to seek the best aerodynamics possible for its racing fleet. For the off-road set, Felt’s engineers work to go beyond the idea of comfort and control with suspension systems that also deliver the most speed and continuous transfer of rider energy possible. Some examples of Felt’s innovations and design ideas are:

In 2007 Felt introduced its Equilink suspension to resolve the issues of “pedal bob” and “brake jack” that rob mountain bike riders of speed and energy. The design earned Outside Magazine’s “Gear of the Year” recognition.

For the purity of speed that time trials demand, Felt looked to the front end. It completely re-thought the idea of the head tube/steerer mechanism and designed something that put an “external” steerer in front of the traditional head tube. The design, Felt claims, improves the aerodynamics, adds stiffness, and improves control all at the same time.

These are only two of the nearly dozen innovations Felt has provided to the bicycle world over the years. And the company “DNA” mandates that it will continue to offer more.

Felts offerings are myriad. Perhaps still best known as a racing breed, and particularly for time trials and tris, riders of other stripes should know about Felt’s breadth. A (very) small sampling of their steeds is below:

Road F75: The F75 is Felt’s low to mid-Range road racer offered at around $1,450. Inexpensive by today’s standards where it’s easy to spend three times that on a steed. Notable that it is an aluminum frame, where Felt is known for its carbon fiber expertise. But carbon finds its way in on the F75 by way of a fork, the seatpost, and dropouts. It specs with Shimano 105 group for components – standard and solid fare at this price.

Tri DA4W: The “W” is for “Women” and highlights Felt’s versatility in offering women-specific bikes across its lines. At approximately $3700 this triathlon racer is in Felt’s mid-range. It features carbon fiber frame, carbon fork, and Felt’s own wheels and uses Ultegrar components. All this comes in at under 19 pounds.

Cyclocross F4X: The F4X is a well-regarded ‘cross bike in the popular $2000 to $3000 range. It features carbon frame and fork, and mix of Shimano Ultegra and 105 components. It doesn’t carry disc brakes which are becoming more common on ‘cross racers, but at this price point the Textro cantilevers are to be expected.

Mountain Edict Nine 3: Felt’s mid-range Edict Nine 3 mates the new 29 inch wheel trend with established dual-suspension designs. Felt includes its proprietary “FAST” suspension with a full carbon frame and Avid Elixir disc brakes. The components are full SRAM with trigger shifters. At about $3700 the Edict Nine ain’t cheap, but ain’t the most pricey bike for its quality out there either.

Café 8 Deluxe Women’s: Look Ma, no hands! That’s how you feel when you see the Café line that Felt offers: old school looks. But the design is up-to-date utility with solid components. At about $630 the Café line, and the Café 8 for women, is just about fun, utility, and simplicity. It comes with a cup holder, bell, and rack and a simple Shimano twist shifter for the 8 speeds it offers.

“At Felt, our mission remains as it’s been since the beginning: to design, develop, and deliver the best bicycles in the world. Period.”

That’s pretty clear. And it seems, so far, so good.