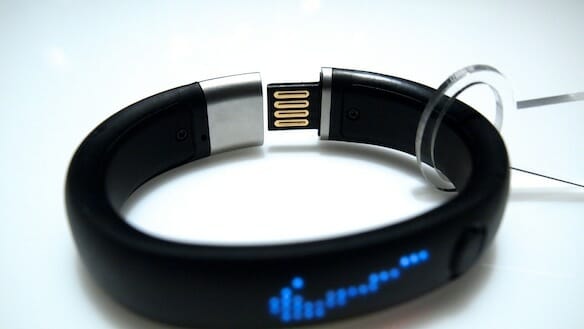 People have always made a perpetual effort to stay in shape and live healthy lifestyles. Unfortunately, things like our jobs, families, and sometimes a lack of motivation can get in the way of those efforts. As a result of our never-ending quests to live better lives, new inventions are constantly hitting the market in an attempt to make it easier to accomplish these goals. The latest trend of devices are the evolution of a typical pedometer, which is simply an instrument that attempts to estimate the number of steps a person has taken and thereby approximating the distance traveled by that person. The three devices we will discuss here are the Nike FuelBand+, the Jawbone UP, and the FitBit One.

The Nike FuelBand+ is a bracelet that houses an accelerometer. The accelerometer tracks all of your daily activities, such as walking, running dancing, basketball, and other activities. The FuelBand+ has a series of LEDs which light up to indicate your progress towards your fitness goal each day. Going all the way from red to green LEDs tells you you’ve reached your goal. The FuelBand+ can tell you your number of steps taken as well as calories burned. You can even see a visualized representation by syncing your FuelBand+ to your iPhone or PC. This also has the convenient feature of sharing your progress with friends and family (for support as well as bragging rights!). The FuelBand+ retails for $149.

The Jawbone UP is another bracelet style device that does many of the same things that the Nike FuelBand+ does and adds a few more. In addition to tracking your activity, it also lets you track your eating habits as well as your sleep patterns (Light sleep versus deep sleep. Even sleep walking!). Other helpful features include a “Power Nap” function, which will wake you up from sleep at an optimal amount of time, which is roughly 26.5 minutes from the time the UP estimates you fell asleep. The Jawbone UP offers extra features where the Nike FuelBand+ leaves off. Unfortunately one drawback is that the UP requires the use of the free iPhone app, so non-iPhone wielding folk are out of luck with this one. The UP retails for $129.

The FuelBand+ and the Jawbone UP are both bracelet style devices. The FitBit One is tiny device measuring 0.2 x 0.8 x 2.2 inches and only 0.3 ounces in weight. It can be carried discreetly in a pocket, purse, belt clip, or any other place you could imagine. Some unique features include the ability to earn badges, which is the equivalent to an achievement on the XBOX 360 or a Trophy on the Playstation 3, for those gamers out there. Many people have found extra motivation in these badges. The FitBit syncs wirelessly with your iPhone/Android smartphone or PC via Bluetooth. As with the other devices, the FitBit will track your steps, distance, calories burned, your sleep patterns (including the quality of your sleep, as measured by your tossing and turning at night). In addition to those standard features, you are also able to log your food intake via the FitBit website (which you can take advantage of without even owning a FitBit device) or downloadable apps. This allows you to track your nutritional intake against your caloric burn. The FitBit is the least costly of our three devices mentioned at retail price of $99.