Here’s How Much Your Healthcare Costs Rise as You Age 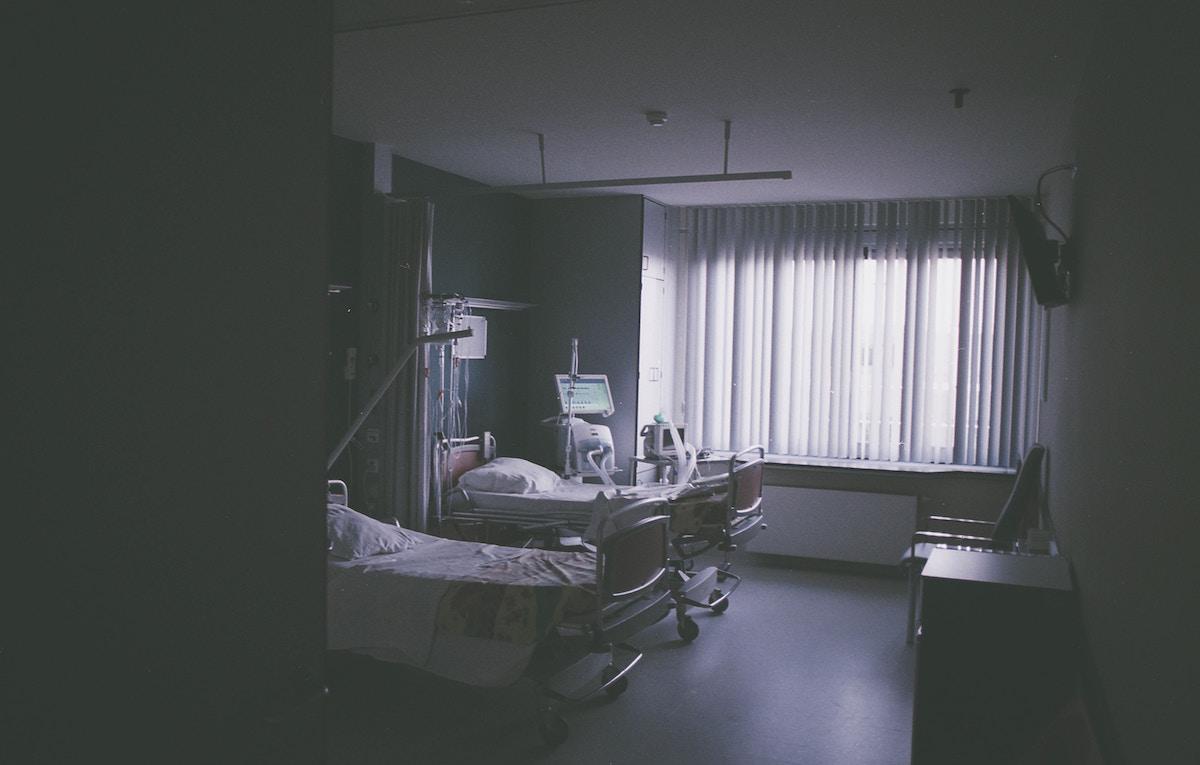 This post is adapted from the blog of RegisteredNursing.org, a Priceonomics Data Studio customer. Does your company have interesting data? Become a Priceonomics customer.

Imagine working your entire life with the plan to retire at the age of 65, only to declare bankruptcy due to medical costs and losing all your assets.

This isn't some unlikely nightmare scenario; the rate of senior citizens declaring bankruptcy has more than doubled since 1999, and the leading cause is high healthcare costs. Despite the existence of Medicare insurance for seniors, it doesn't cover all costs and healthcare can be extremely expensive, especially as you age.

In this analysis, we decided to look at the most recent data on how healthcare spending increases as you age along with Priceonomics customer RegisteredNursing.org. The goal of this is for people to understand just how much higher healthcare costs are the older you get and how sensitive they are to medical inflation rates.

By the time you reach 65 years old, average healthcare costs are $11.3K per person, per year in the United States. This is nearly triple the annual average cost of when you're in your 20s and 30s. During your adult lifetime, average spending for women is nearly twice as high as for men. Healthcare spending for minority groups like Black and Hispanic Americans is approximately 30% less than on White Americans.

Even if your insurance company or Medicare covers most of that bill, the typical American can still be on the hook for a very large sum of money to cover their healthcare costs as they age.

The Department of Health and Human Services commissions a detailed survey of medical costs dating back to 1999 all the way up to 2016 most recently. The data set, The Medical Expenditure Panel Survey (MEPS), provides detailed healthcare spending data segmented by age and demographics, among other things. The spending figures noted as total average spending per individual, regardless of who is paying it (the insurance company, the individual directly, or some combination between).

When budgeting for your retirement, it's tempting to think your costs may be much lower in old age. Afterall, your kids may (hopefully) be financially self-sufficient adults and the mortgage on your home may be paid off.

But the big unknown is healthcare expenses. It turns out as you age, your annual healthcare costs go up a lot and despite having insurance you may be on the hook for copays, deductibles, and all sorts of things that aren't actually covered.

The MEPS data set shows the average spending per person in the United States based on their age group. 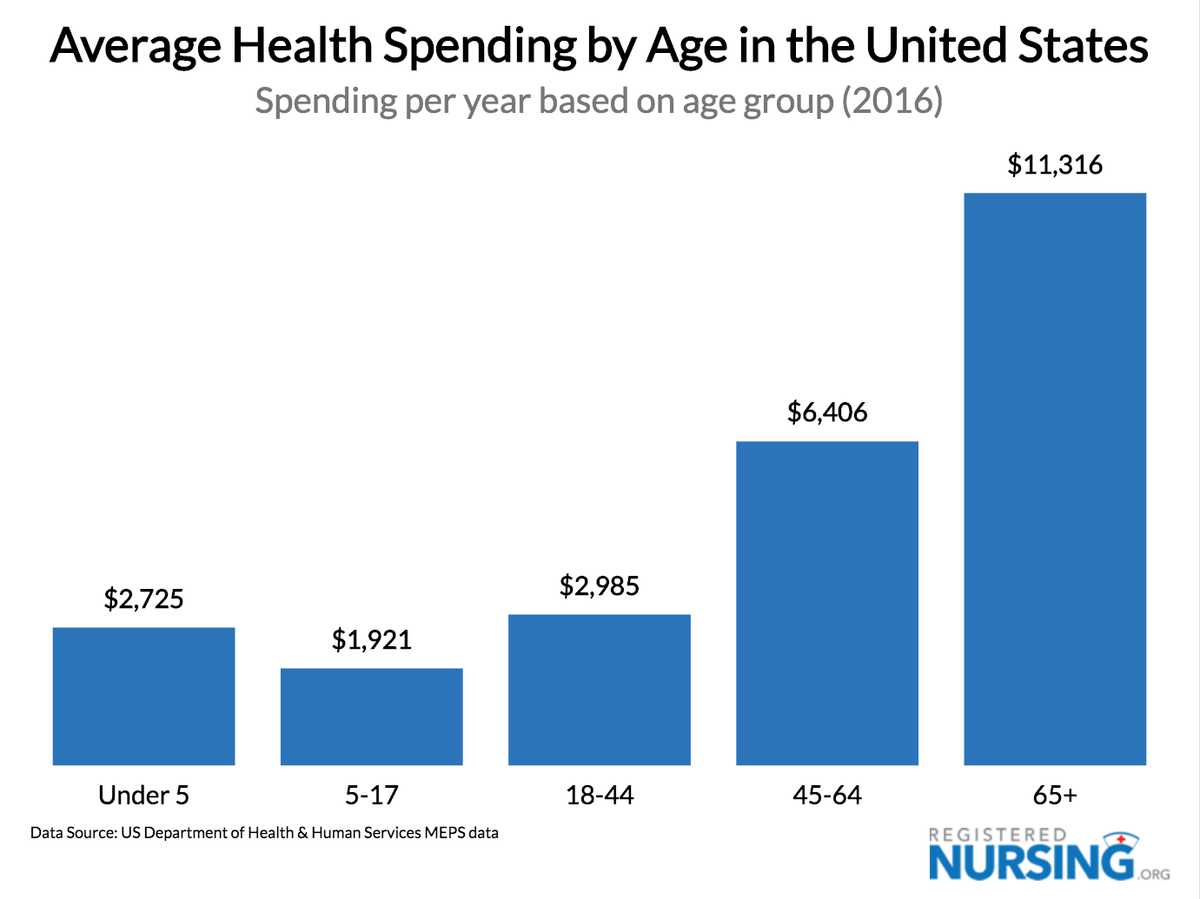 It turns out being born is somewhat expensive and childhood costs peak when you're under five years old. Healthcare costs are lowest from age 5 to 17 at just at $2,000 per year on average. From then on it's a steady increase, however, with costs rising to over $11,000 per year when you're over 65 years old.

The costs of your care may be mostly covered by private insurance or Medicare, but not all costs are always covered and an unexpected bill can have devastating effects on your finances. As one senior citizen relates on their traumatic experience with health insurance:

"My bankruptcy started with back surgery. I had several medical tests that my insurance did not cover. This caused me to fall behind in my medical payments. The next thing I knew, the bills began piling up. I got to the point I owed more than I was making on Social Security."

Healthcare costs are not evenly distributed. You could be among the tragically unlucky with much higher costs. But not only that, but healthcare spending varies substantially by gender and demographic.

At each stage of life, health care spending for women is substantially higher than for men. The need for more gerontology nurse practitioners and wnhp in the coming years will be vitally important to the success of healthcare programs. 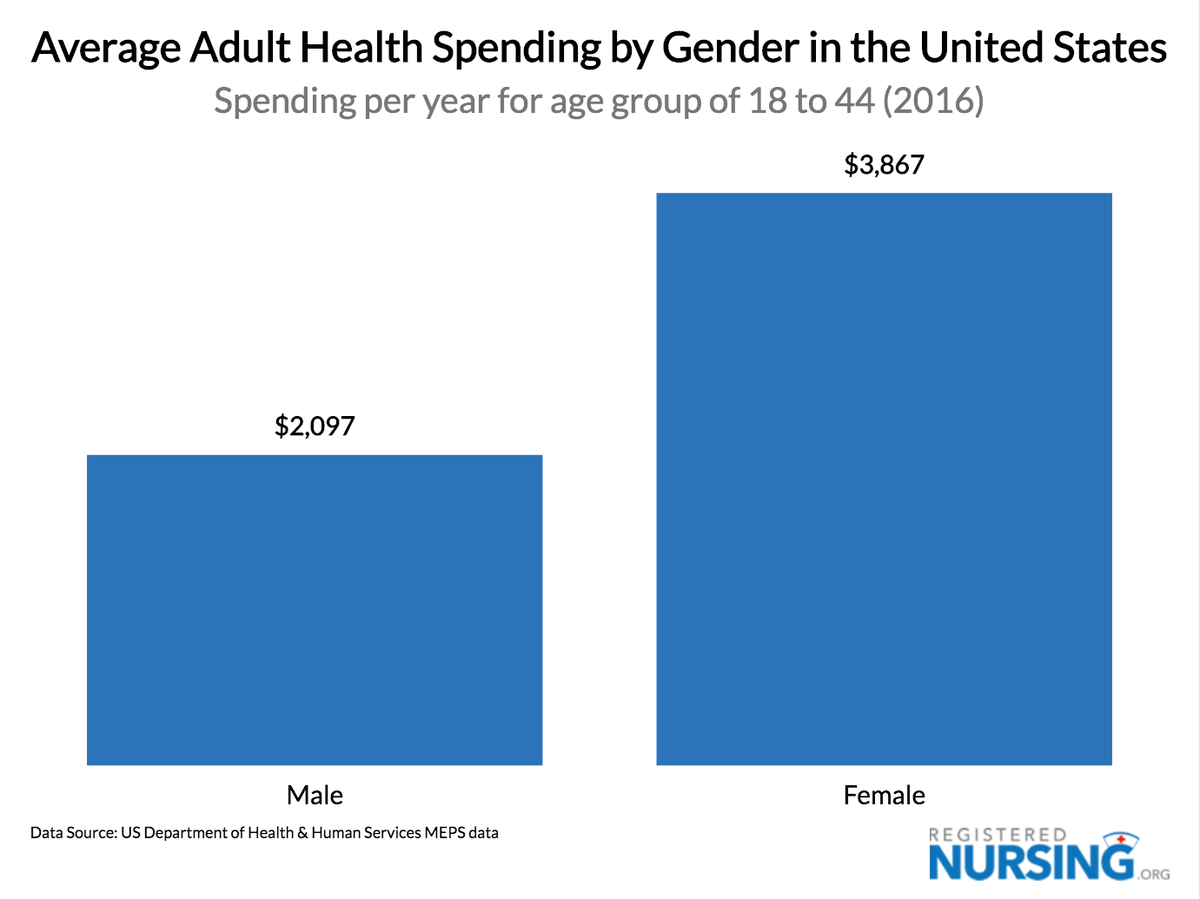 According to this data, women will need to budget more than men for health care expenses each year. Not only that but women tend to live two more years than men in the United States which requires additional savings. The MEPS data also reveals tremendous inequality in healthcare spending by race and demographic. The following chart shows average spending by demographic group for adults in America: 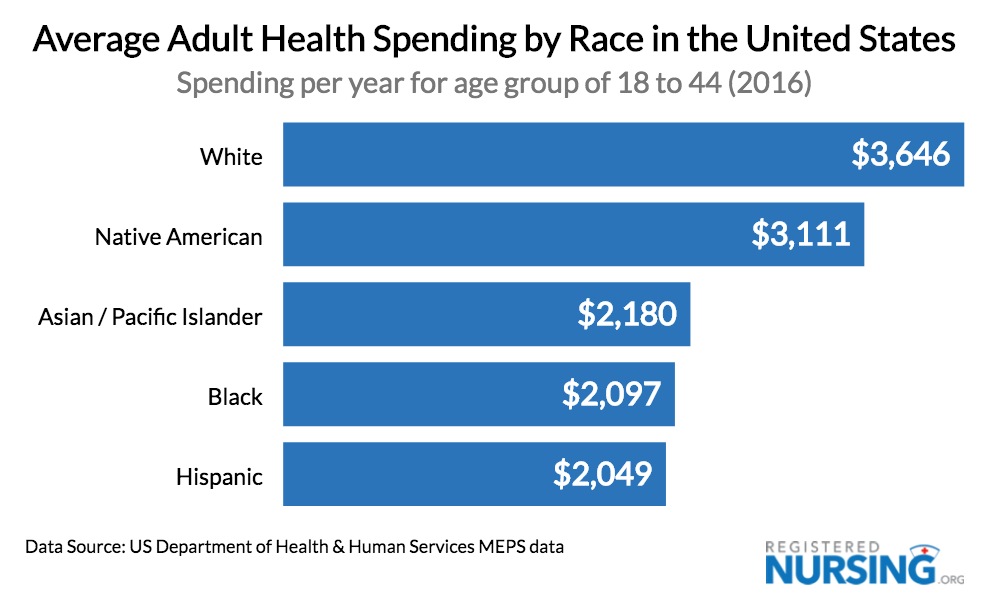 There is an average of $3.6K annual healthcare spending on white adult Americans, approximately 70% higher than for Asian, Black, and Hispanic Americans. The root cause and implications of this unequal spending should be studied much further to see if their remedy can improve healthcare outcomes for all.

So if we add up all these annual spending figures how much will your healthcare cost over the course of your lifetime? In today's dollars, if you're "average", you can expect it to cost $414K.

The following chart shows this total spending during various ages in your life. Nearly two-thirds of one's healthcare spending takes place after your 45th birthday: 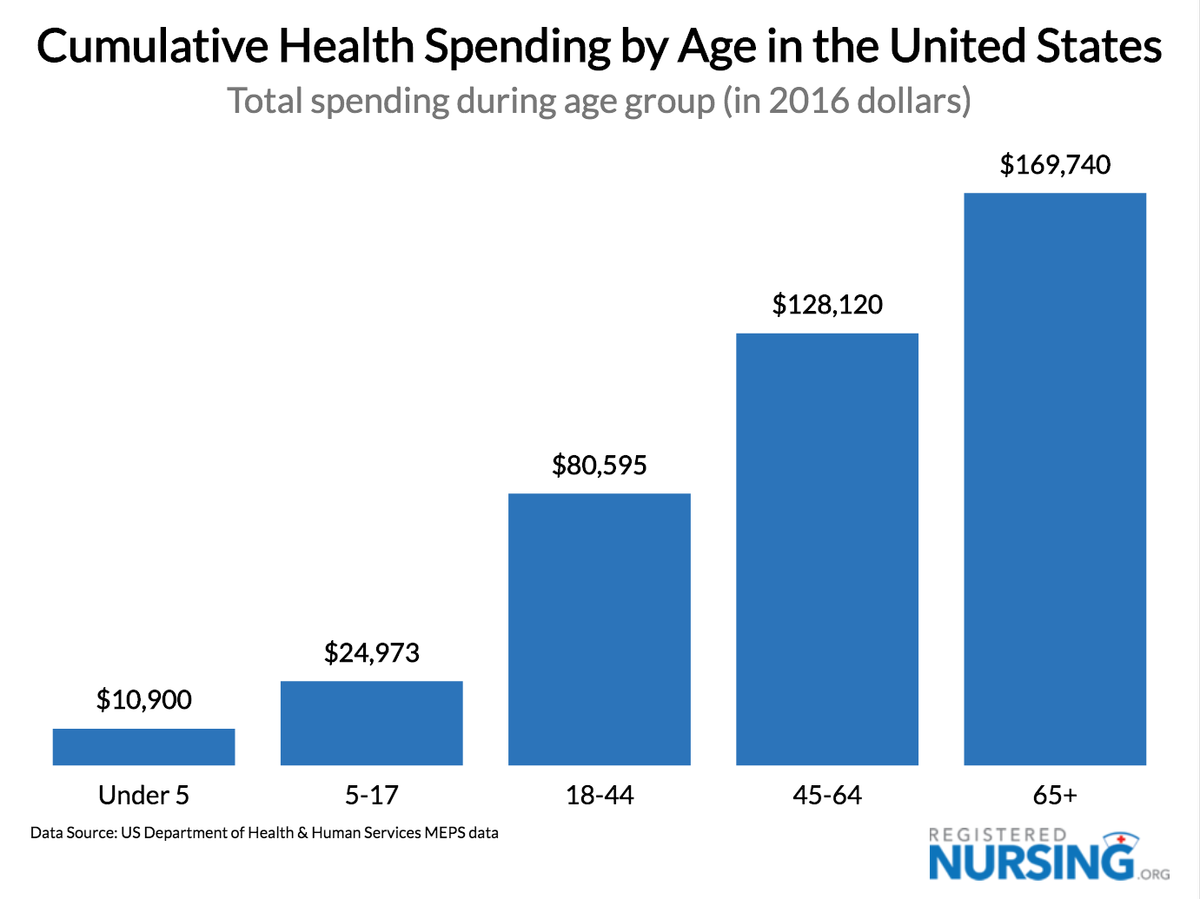 However, there is a lot of reason to believe this estimate of $414K spent on your healthcare is being conservative. First of all, it's for the "average" person. If you have a health catastrophe, your healthcare spending may be tremendously higher. Second, the above figures assume that healthcare costs in the future increase as the same rate as inflation to arrive at the $414K spending in today's dollars.

There is a lot of data to suggest that healthcare costs in the United States have been increasing much faster than inflation. One estimate is that over the last two decades, healthcare costs have increased twice as fast as inflation.

As this analysis shows, your healthcare spending is tremendously expensive. Perhaps you might have great health insurance, but if money is spent on your healthcare, someone is paying for it. In large part you pay for it via healthcare premiums, but if that doesn't cover it then other people's premiums or taxes will. Either way, high healthcare costs mean high spending for someone. Not only that, but even with the best health insurance, senior citizens are often hit with expensive co-pays or need drugs that their plans won't cover. These unexpected and large expenses can often wreck one's finances and result in bankruptcy. As you save up for retirement, it's important to understand the value of having savings for your future medical expenses, which would be much higher than they are today.