How Breakfast Became a Thing 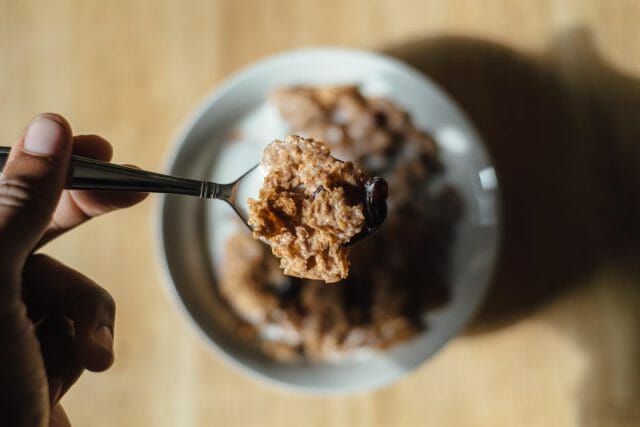 You’ve probably heard that “breakfast is the most important meal of the day.”

What you may not know is the origin of this ode to breakfast: a 1944 marketing campaign launched by Grape Nuts manufacturer General Foods to sell more cereal.

During the campaign, which marketers named “Eat a Good Breakfast—Do a Better Job”, grocery stores handed out pamphlets that promoted the importance of breakfast while radio advertisements announced that “Nutrition experts say breakfast is the most important meal of the day.”

Before cereal, in the mid 1800s, the American breakfast was not all that different from other meals. Middle- and upper-class Americans ate eggs, pastries, and pancakes, but also oysters, boiled chickens, and beef steaks.

The rise of cereal established breakfast as a meal with distinct foods and created the model of processed, ready-to-eat breakfast that still largely reigns. And it all depends on advertising and convincing you that breakfast is the most important meal of the day.

The Beguiling History of Breakfast

The modern era of breakfast begins with cereal. Before its invention, breakfast was not as standard or routine.

“The Romans believed it was healthier to eat only one meal a day,” food historian Caroline Yeldham has said. Many Native Americans, Abigail Carroll writes in The Invention of the American Meal, ate bits of food throughout the day (rather than at set meals) and sometimes fasted for days at a time.

Of medieval Europe, historians alternatingly write that breakfast was only a luxury for the rich, only a necessity for laborers, or mostly skipped. And while many American colonists ate breakfast, they were reputedly harried affairs that took place after hours of morning work.

Historians tend to agree that breakfast became a daily, first thing in the morning institution once workers moved to cities and became employees who worked set schedules. In Europe, this first began in the 1600s, and breakfast achieved near ubiquity during the Industrial Revolution. With people going off to a full day’s work, breakfast became a thing. 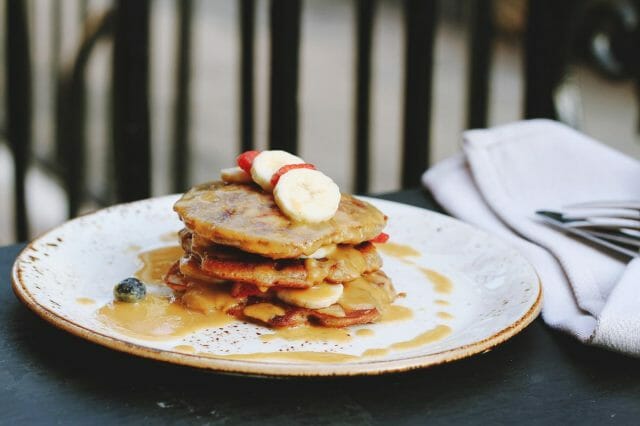 There was already a tradition of certain foods—like bread, ale, cheese, porridges, or leftovers—being cooked or eaten in the morning. Although since chroniclers of history spend little time describing breakfast, tracing the origins of favorite dishes is difficult.

Why are eggs a staple of brunch? Searching for the eggs–breakfast link takes one back at least to early history; Bible scholar John A. Rice describes Mary of Nazareth preparing eggs for a breakfast attended by Jesus. What about pancakes? Paleontologists speculate that humans ate primitive pancakes over 5,000 years ago; more recently, Thomas Jefferson enjoyed crepe-like pancakes.

It was not a recipe for good health. Americans complained chronically of indigestion, which early nutritionists and reformers named dyspepsia. As Abigail Carroll has explained, “Magazines and newspapers [just overflowed] with rhetoric about this dyspeptic condition and what to do about it.” It was the 1800s equivalent of our obesity debate.

Americans needed a simpler, lighter breakfast. What they got was cereal.

The Invention of Cereal

Before cereal represented our over-sugared, overprocessed relationship with food, Americans viewed cereal as a health food.

Its origins lie in health sanitariums run in the mid to late 1800s by some familiar names—like Dr. John Harvey Kellogg. It was a reform period when doctors were still often called quacks: Germ theory was just gaining prominence, and Dr. Kellogg’s favorite medical tool was a bath. His malady cures resembled spa treatments; “hydrotherapy” was popular at the time.

Kellogg and his peers believed they could improve Americans’ health by changing their diets. They believed that too much meat and too many spices had negative effects, and they preferred whole grains to white breads. A dietary reformer named Sylvester Graham invented the graham cracker in 1827. James Caleb Jackson, who did not allow red meat at his sanitarium, invented a cereal that he named “granula” in 1863. And James Kellogg developed granola or corn flakes in the 1890s.

The original versions were spartan affairs. They were not sweet, and people had to soak Jackson’s granula in milk just to make it edible. Critics called granula “wheat rocks.” Kellogg’s versions weren’t much better.

But people wanted them. “The first year that the product was available saw more than 50 tons manufactured and sold in spite of primitive production facilities,” a Kellogg biographer writes of his corn flakes. “Soon cereal manufacturing companies sprang up all over the country.” By 1903, there were 100 cereal companies in Kellogg’s town of Battle Creek alone.

It was a full on craze. Cereal was seen as a solution to the nation’s dyspepsia, author Abigail Carroll argues, and since it didn’t need to be cooked, it was a convenience food at a time when the Industrial Revolution meant people had less time and less access to a kitchen or farm. 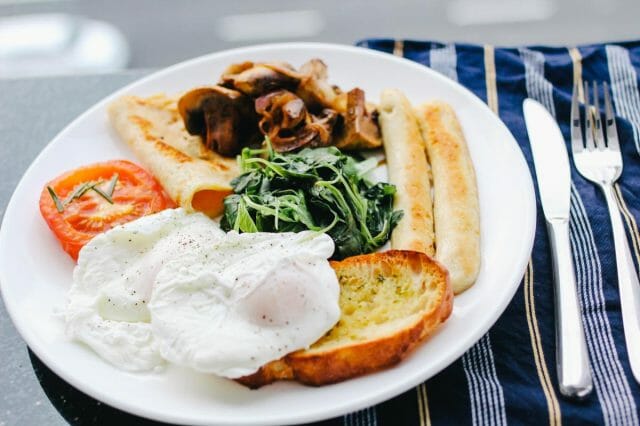 The most successful food trends tend to combine science and morality, and the invention of cereal was no exception.

Kellogg termed his lifestyle—more exercise, more baths, and simpler, blander foods—”biologic living”, and he gave lectures and wrote long tracts to promote it. He described the modern diet as unnatural and too diverse. “To eat biologically,” he wrote, “is simply to eat scientifically, to eat normally.” Like a paleo devotee, he promised a return to man’s natural diet. Except his answer was cereal.

But Dr. Kellogg believed that eating biologically would solve much more than dyspepsia and indigestion. Like Dr. Graham with his graham cracker, Kellogg believed  Americans’ meat-centric diets led them to carnal sins. “Highly seasoned [meats], stimulating sauces… and dainty tidbits in endless variety,” wrote Kellogg, a vegetarian, “irritate [the] nerves and… react upon the sexual organs.”

John Harvey Kellogg was a true believer. During his lectures, he explained how people could make their own cereal at home. “You may say I am destroying the health food business here by giving these recipes,” he said at one talk. “But I am not after the business; I am after the reform.”

Like any food trend, though, the marketers took over the purists’ work. Dr. Kellogg felt particularly bitter about the development: the two most successful cereal entrepreneurs were his brother, Will Keith Kellogg, and one of his former patients, C.W. Post, who Dr. Kellogg accused of stealing the corn flake recipe from his safe.

Each man created cereal companies, the Kellogg Company (which was headed by Will Kellogg and not Dr. Kellogg) and Postum Cereal Company (now Post Cereals). Both of them became wildly successful thanks to two key ingredients: sugar and advertising.

By the 1940s, Post Cereals fully coated its cereals with sugar. The Kellogg brothers had long argued over adding sugar—Dr. Kellogg believed sugar was a vice in his pure creation, while Will Kellogg thought it was necessary to improve the taste of their “horse-food.” After some hand wringing, the Kellogg Company copied Post and coated corn flakes with sugar.

Still, cereal kept its health food reputation thanks to a constant barrage of advertising. Cereal manufacturers like C.W. Post claimed that cereal cured everything up to malaria and appendicitis. The proclamations on today’s cereal boxes that they are “A good source of Vitamin D!” date back to Americans’ obsession with vitamins in the 1920s.

To appeal to children, cereal companies pioneered the use of cartoon mascots. Characters like Tony the Tiger (Frosted Flakes) and Snap, Crackle, and Pop (Rice Krispies) first appeared in the 1930s.

Advertising was they key to the cereal business. Whether they involved cartoon characters or wacky health claims, the important thing was to establish a brand for each cereal.

“The sunshine that makes a business plant grow,” C.W. Post said, as he embarked on a career that would earn him a net worth (in 2016 dollars) of $800 million, “is advertizing.”

“The Most Important Meal of the Day”

Cereal and breakfast foods don’t have a monopoly on animated mascots and zany health claims. But there are a number of reasons why the battle over breakfast is particularly ferocious.

The first is that any company that convinces you to eat their cereal, pop tarts, or bagels absolutely owns your breakfast, because most people eat the same breakfast every day. Studies have found that consumers have strong brand loyalty to breakfast foods like cereal. Our breakfast choices are likely more habitual because of the strength of morning routines. Ads by the chicken lobby may convince people to eat a bit more chicken. But an avalanche of Tony the Tiger ads can get tens of thousands of children to eat Frosted Flakes every morning for years.

Another is that while some Americans cook breakfast, people’s desire for a fast, convenient meal means that many breakfast foods are packaged products that rely on advertising. You can glean this from the structure of the cereal industry: cereal is extremely easy to make—a fact that angered Dr. Kellogg, who patented his creation but failed to prevent others from copying it—yet just a few companies dominate the market.

As the Federal Trade Commission once complained in an antitrust lawsuit, competing with the cereal giants is difficult because they create dozens of cereal brands and promote “trademarks through intensive advertising [which] results in high barriers to entry into the cereal market.” The magic of Snap, Crackle, and Pop—and all the advertisements for cereals, pop tarts, yogurts, and breakfast bars—is high profits from an easily imitated product.

The final reason why the marketing battle over breakfast is so fierce is that corporations have for decades seen it as the meal that offers the most opportunity to ring out more food spending from consumers.

Why have fast food chains focused more on advertising egg McMuffins, White Castle belgian waffles, and Taco Bell breakfast burritos? As industry members explained in a TIME article, “throughout the fast food world, lunch and dinner sales have been flat for years, while breakfast sales have climbed steadily.” You can find the same logic in cereal makers’ 1944 marketing strategy—the one that coined the phrase “Breakfast is the most important meal of the day.”

“Breakfast is the grocer’s most promising target,” one of their ad men explained. “Lunch and dinner in the average American home are fairly well set.” 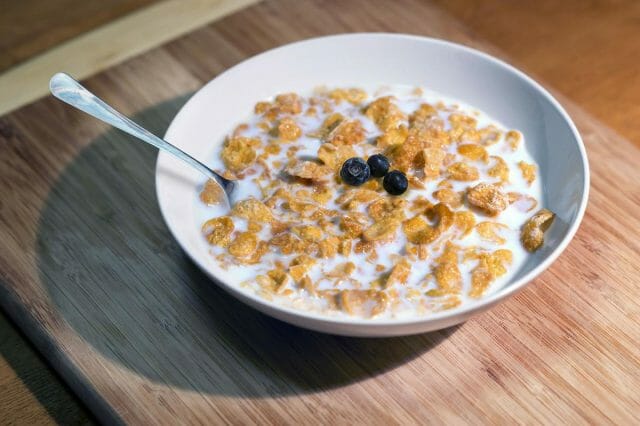 Did the marketers and executives genuinely believe in the value of promoting a cereal breakfast as healthy? Nutritionists had debated back and forth for decades whether America’s increasingly desk-bound workforce needed a hearty breakfast. (Really we’ve never stopped.) But by the time of the 1944 campaign, during World War II, government nutritionists had sided with the pro-breakfast camp. In the interest of improving the health of army recruits, they teamed up with cereal companies to suggest that everyone eat a “good breakfast of whole-grain cereal and fruit.”

But you won’t hear that from marketers. Breakfast is the most skipped meal in America, which means money on the table for the food industry.

It’s always a good idea to remain skeptical of the claims made in advertisements and the ideas expressed by organizations with vested interests. But with breakfast foods, skepticism is particularly necessary. Since advertising is the foundation of the entire ready-to-eat industry, the incentives for deception are strong.

Be vigilant. Breakfast is the most marketed meal of the day.