How Much Does It Cost to Be a Bridesmaid? 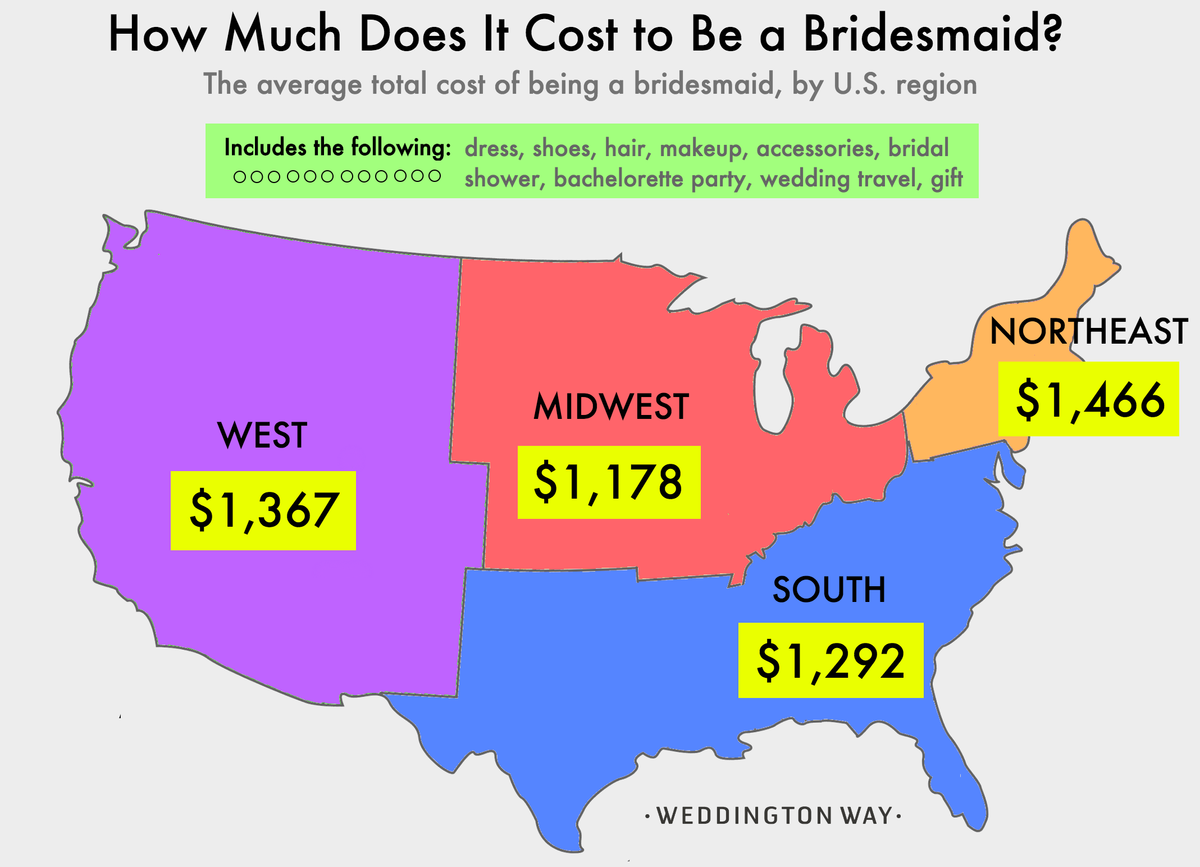 When Savannah Taylor’s life-long friend asked her to be a bridesmaid, she was honored, but a little flustered.

“It was my first time attending a wedding,” she says. “I was happy that [the bride] considered me one of her closest girlfriends, but also a little worried about how much it would cost me.”

The 25-year-old design student had cause for concern: She’d need to buy a bridesmaid dress, shoes, and matching accessories. She’d need to get her hair and makeup “done up.” She’d need to pitch in for the bachelorette party and bridal shower, and fly from San Francisco to Portland for the actual ceremony. Then there was the wedding gift — a $175 set of dinner plates.

As Ms. Taylor learned, being a bridesmaid comes with a price of admission. But exactly how much is the ticket?

A number of reports have examined the cost of being a bridesmaid, but the vast majority of them are speculative or based on anecdotal evidence. We set out to provide a definitive, data-based answer to this age-old question. With the assistance of our customer Weddington Way, we surveyed 600+ women who shop on their site, and asked them to map out how much various bridesmaid-related expenses had set them back: a dress, shoes, makeup and hair, accessories, bridal shower and bachelorette party costs, wedding travel and lodging, and a gift.

Here’s what we found: By age 27, the average American woman will be a bridesmaid 3 times, and each time it will cost her an average of $1,324.

But how does this figure break down? First, let’s take a closer look at bridesmaid expenses line-by-line: 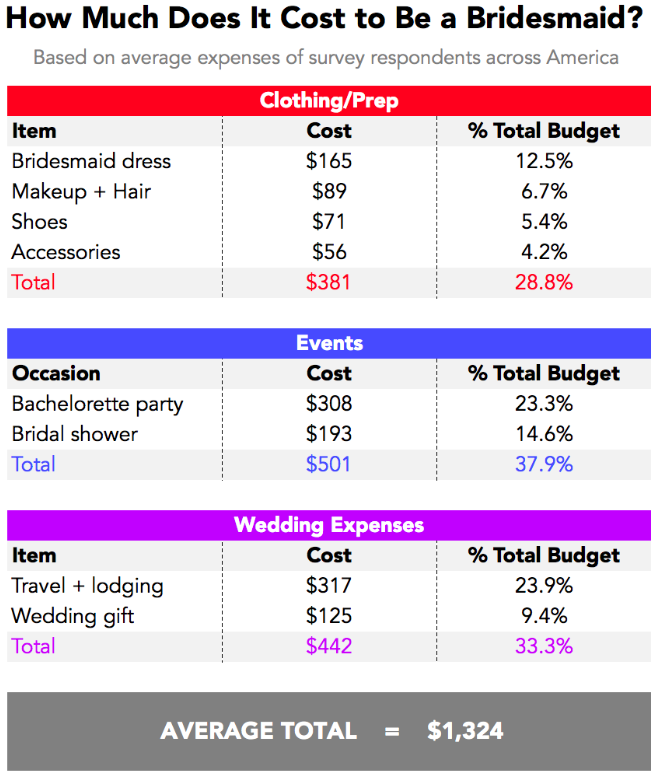 The average American bridesmaid spends $381 — or 28.8% of the $1,324 total — on clothing, hair, and makeup. Within this category, the dress, typically selected by the bride, ranks as the most expensive component.

From here, the real expenses begin. On average, women spend the most ($501) on events: the bridal shower and the bachelorette party. These two get-togethers represent nearly 40% of the total cost of being a bridesmaid.

Roughly 53% of all bridesmaids travel for the wedding, spending $317 on average on flights, rental cars, and lodging. Including the gift, wedding-related items tally up to one-third of the overall cost of being a bridesmaid.

But wait a second — bridesmaids don’t always have to pay for all of this stuff, right? In our survey, when asking women to include the costs of various items, we included a “paid for by bride” option. Here are the expenses most commonly covered by the woman in white:

What we’ve listed above are national averages. Do the costs of being a bridesmaid vary at all by where you live?

We sorted our state-level data into four geographic regions (West, Midwest, Northeast, and South), and here’s what we found:

Let’s take a look at how these costs break down by region: 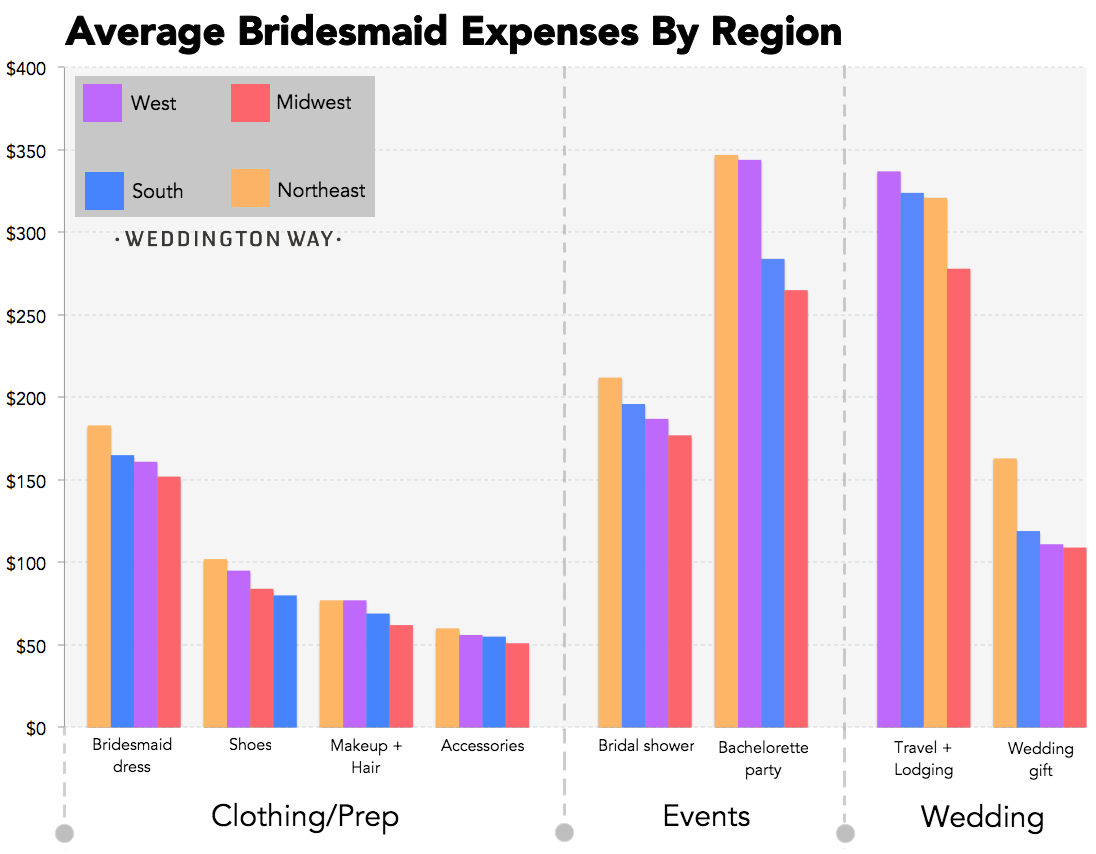 On average, Northeasterners spend $70 more on clothing and $50 more on a wedding gift than Midwesterners. But the real difference in regional expenses lies in events (bridal shower, bachelorette party), where those in New York and California outspend those in the the Midwest by more than $120.

The average woman in the United States has been a bridesmaid 3 times by the age of 27.

Though there is a lack of data when it comes to pinpointing how many times a woman is a bridesmaid in her lifetime, a number of our survey respondents over the age of 40 responded that they’d served as one 4-6 times. Assuming that the average is 5 times, and reverting back to our national data, how much money are you likely to spend on being a bridesmaid in the course of your life?

The chart below shows projected expenses, ranked from most to least expensive. 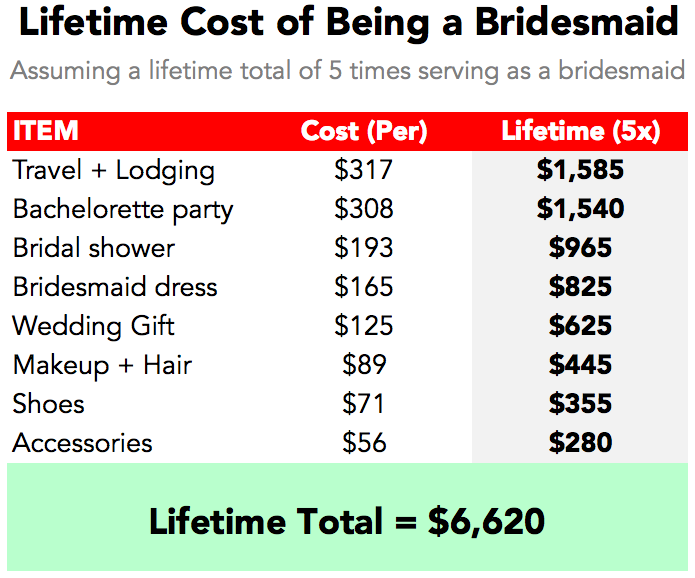 While $6,620 may sound like a lot of money for a few weddings, think of it this way: the largest expenses (travel + lodging, bachelorette party, and bridal shower) are all experiences you’re not likely to forget. The physical goods (dress, shoes, etc) are relatively inexpensive in comparison — and you may able to reuse a few items for subsequent weddings.

And if you need additional consolation, remember that being a bridesmaid is vastly more affordable than being a bride: the average wedding in the U.S. costs $26,000!

For our next post, examine why the "average" triumphed over the median and the mode. To get notified when we post it →  join our email list.