How Much Does it Cost to Clone Your Favorite App?

How much does it cost to build an application like Uber? If you ask a developer, it’s hard to get a straight answer. That makes sense, software development is a complex process. However, one of our customers, Gigster, recently published a price list of how much they’ll charge you to build a technological clone of popular apps like Uber and Airbnb.

So, if you want to build your basic “Uber for burritos,” or “Airbnb for ferrets,” on iOS, here’s how much it will cost you: A very basic, no-frills Uber iOS clone costs roughly $16K, and a Tinder clone is $11K in the Gigster marketplace. The typical iOS app costs about $12K to clone, and Android tends to be about 20% cheaper. 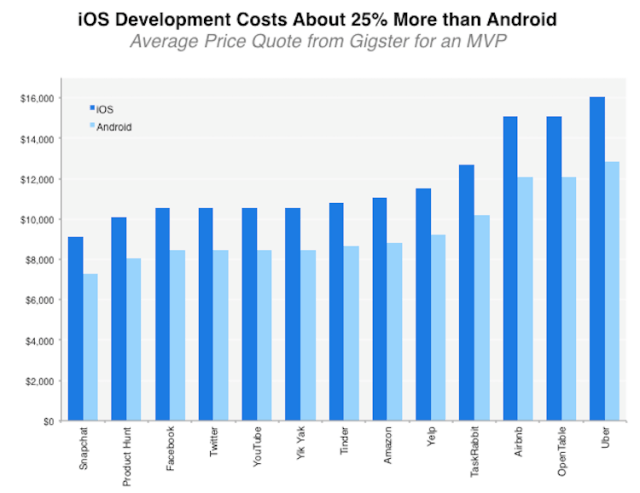 Gigster is an marketplace that sits between app developers and the people who want to hire them. A lot of people, it turns out, basically want to remake an existing app for a different purpose or user base. Once you know how much a developer will be paid per hour, the pricing of a project depends on how long the project takes to complete. Gigster’s price quotes come from crunching the data on the thousands of projects that have come through the Gigster marketplace, and how many hours those projects took.

Time to complete a product depends on how complicated it is. These prices are for very basic versions of the apps — minimum viable products (MVPs). Gigster’s pricing assumes the projects will take between six and ten weeks. “A polished, launch-ready product costs about three to four times the amount an MVP would,” Gigster has written, “and takes between three and four more months.”

What apps are most popular to clone?

Among these apps, Uber is the most popular to clone. By a longshot. 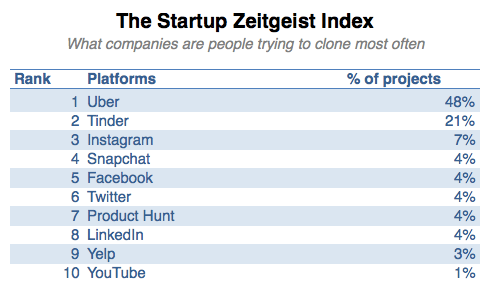 Relative popularity of requests to clone apps, in the Gigster marketplace

It’s funny, because Uber is also the most expensive app to clone. As Gigster writes, “Uber is essentially two apps — with different features — in one product: one for passengers and one for the drivers.” There are other apps like this, Airbnb, Open Table, and Task Rabbit among them. But, Gigster notes, “Among these apps, Uber is still particularly expensive because it requires a lot of features other apps don’t, including mapping and real-time navigation.”

But, they note, Uber-style apps are currently very popular. Maybe it has to do with Uber’s current $50 billion valuation.

Including Uber, the other most popular apps to remake — Tinder, Instagram, and Snapchat — all have something in common. They’re all for mobile. 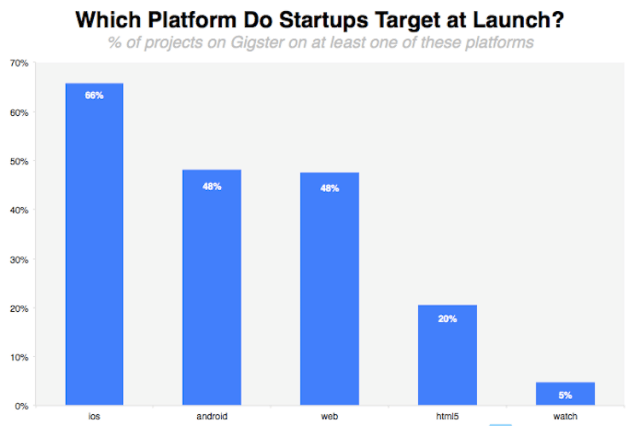 The percentage of clients targeting each platform at launch

It turns out that 66% of Gigster clients opt to build a product for iOS at launch. Android and web are tied for second with 48% of projects. The percentages in the above chart add up to over 100% because 53% of Gigster clients opt to develop for multiple platforms at launch. For example, a client might opt to develop an iOS app, and an Android app, and a website at the same time.

Looking at all this data together, it looks like mobile — especially iOS — is definitely the place to be for a fledgling start-up these days. According this data, the thesis “the web is just the long tail of apps you haven’t installed yet” may actually be coming true.