How Much Will That Extra Bedroom Cost You? 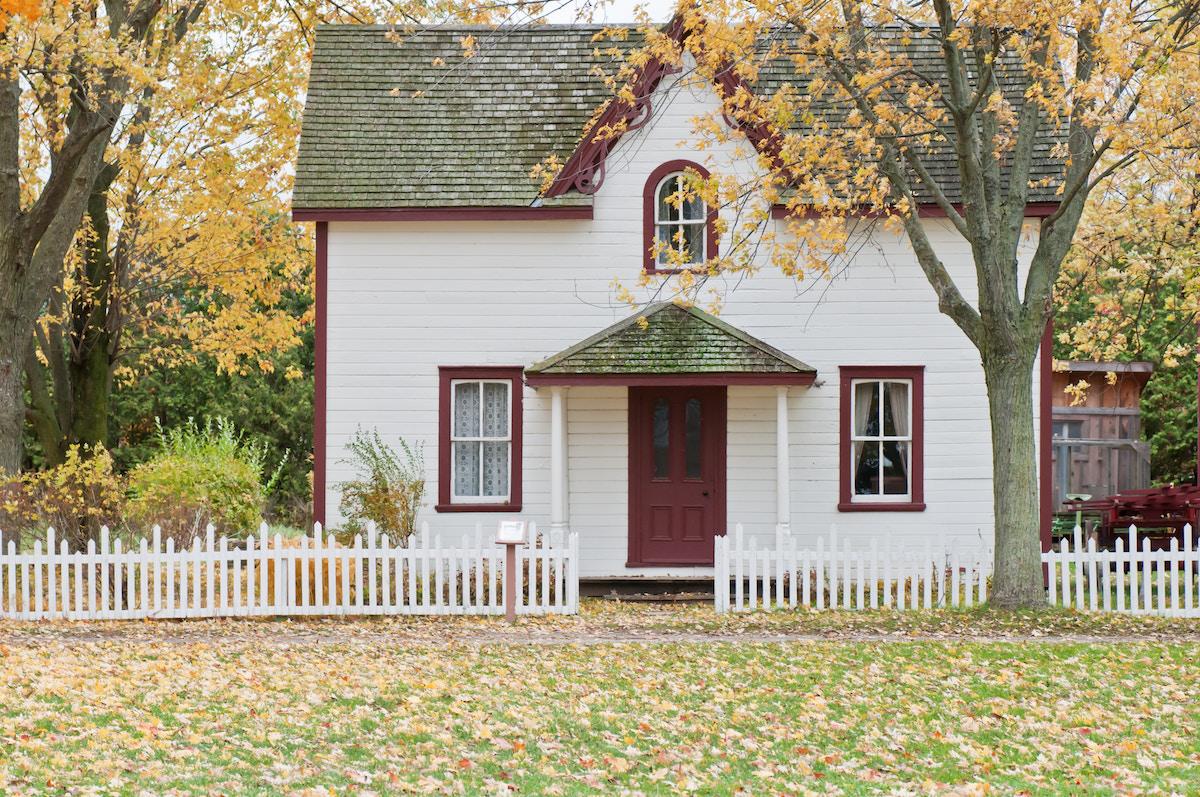 For a variety of reasons, sometimes you just need a bigger house with more bedrooms. Perhaps a new baby on the way, or the kids no longer want to share a room, or maybe you started a new job and now need a home office.

This desire for space is often most acute in cities across america, where space is in short supply and the cost of an extra bedroom can be at a handsome premium. But just how much will that extra bedroom you’ve been dreaming about cost you?

We analyzed data from Priceonomics customer RealtyHop, a home search site that maintains pricing data on just how much homes are selling for based on the number of bedrooms. We decided to look at home prices in the top 100 metropolitan areas in the United States and look at median prices for one bedroom, two bedroom, three bedroom, four bedroom, and five bedroom homes.

We found that across America, the least expensive upgrade is going from a one bedroom to a two bedroom ($30K more).  Upgrading to a fifth bedroom is most expensive, costing over $113K versus a four bedroom.

The cost of adding an extra bedroom varies dramatically across the country in our analysis of large metro areas. The most expensive place in America to upgrade to a two bedroom from a one bedroom places is the Denver metro areas where it costs over $100K. Upgrading to a third bedroom or a fourth bedroom is most expensive in the San Jose metro area where those additional bedrooms cost $270K and $300K respectively.

To start, it’s worthing spending a moment on the methodology behind this report. We looked at the median sales price as of December 2018 for the top 100 metropolitan areas as measured by population. Metropolitan areas roughly correspond to a major city and the surrounding area (for example the New York metro area includes the city, but also part of Connecticut, New Jersey, and more suburban or exurban parts of New York). As a result, these are medians across all these different types of housing stocks in the metro area.

With that note in mind, how much does it cost to buy a home across America? It depends on the number of bedrooms you want! The chart below shows the median price of a home in the top 100 metropolitan areas, segmented by number of bedrooms: 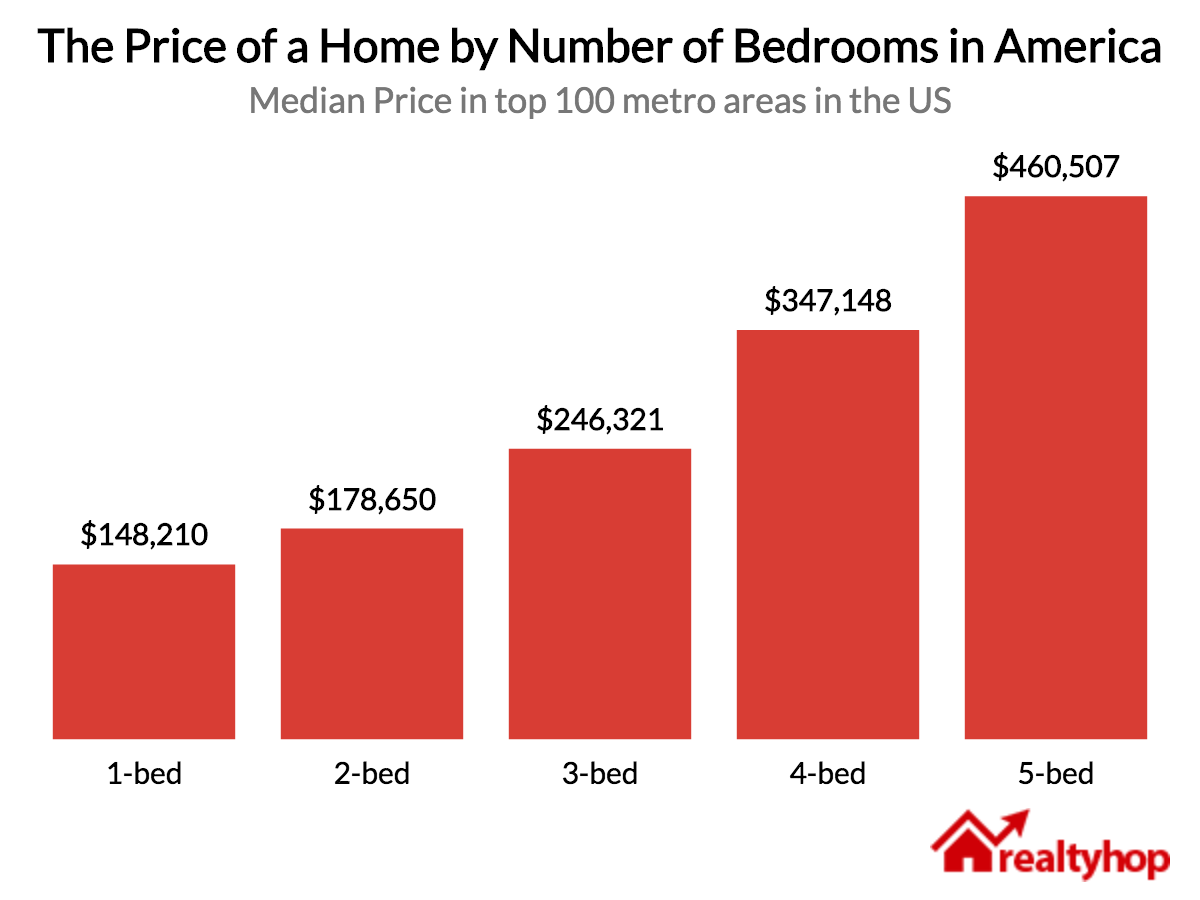 Not surprisingly, the fewer the bedrooms in your home, the lower the price. Across the country, a one bedroom costs $148K, while a five bedroom costs nearly half a million dollars. However, it’s worth noting that homes with fewer bedrooms may tend to be condominiums while larger ones are more likely to be single family homes.

Just how much does it cost to upgrade to an extra bedroom from where you are today? The chart below shows the national upgrade cost of adding a bedroom, depending on how many you have today.

Adding a second bedroom is the cheapest by far if you’re currently living in a one bedroom place, with an upgrade cost of $30K nationally. Each respective bedroom costs you much more however. Moving to a three bedroom costs your nearly $68K more, and after that adding a bedroom costs more than $100K per bedroom.

However, these prices vary dramatically depending on where you live. Part of the reason is of course that property values vary dramatically across the country. Another part is that smaller homes in metro areas may be concentrated in the more expensive urban area while larger ones could be in less expensive suburbs (a high concentration of one-bedroom apartments in New York City, but a mix of starter 2-bedroom starter homes in Long Island, for example).

Where in America does it cost the most to upgrade to a second bedroom from your one bedroom? The chart below shows the top 25 most expensive metropolitan areas in America for adding that second bedroom? 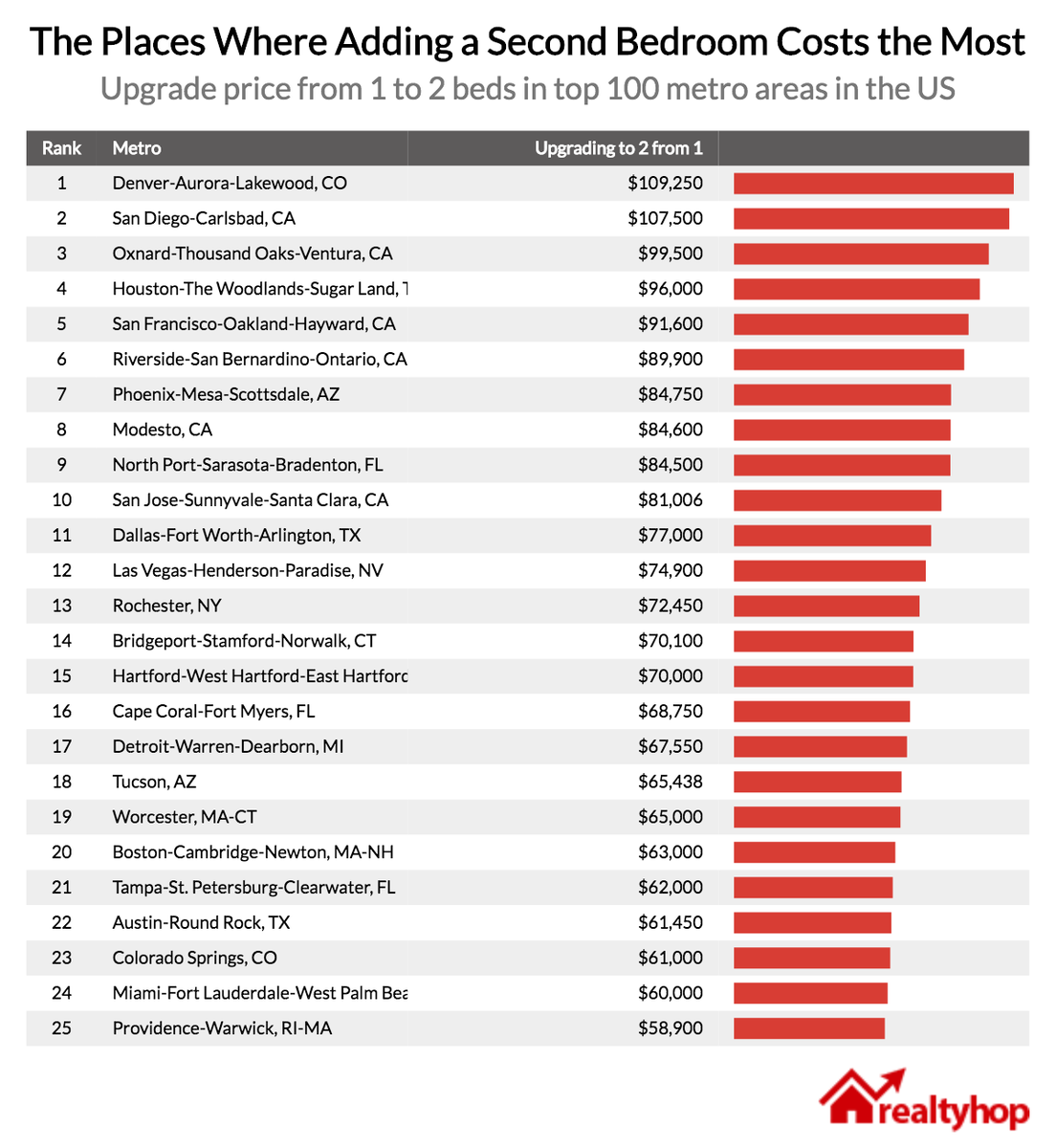 The Denver metropolitan area is the most expensive place in America to add that second bedroom, where it will cost you over one hundred thousand dollars to do so. Similarly expensive is the San Diego metro area, where it costs nearly $108K if you need to upgrade from your one bedroom to a  slightly bigger place. Six out of the top ten most expensive places to upgrade are in California, a theme that will continue throughout the rest of the analysis.

Next, we look where upgrading to a three bedroom from a two bedroom will cost you the most: 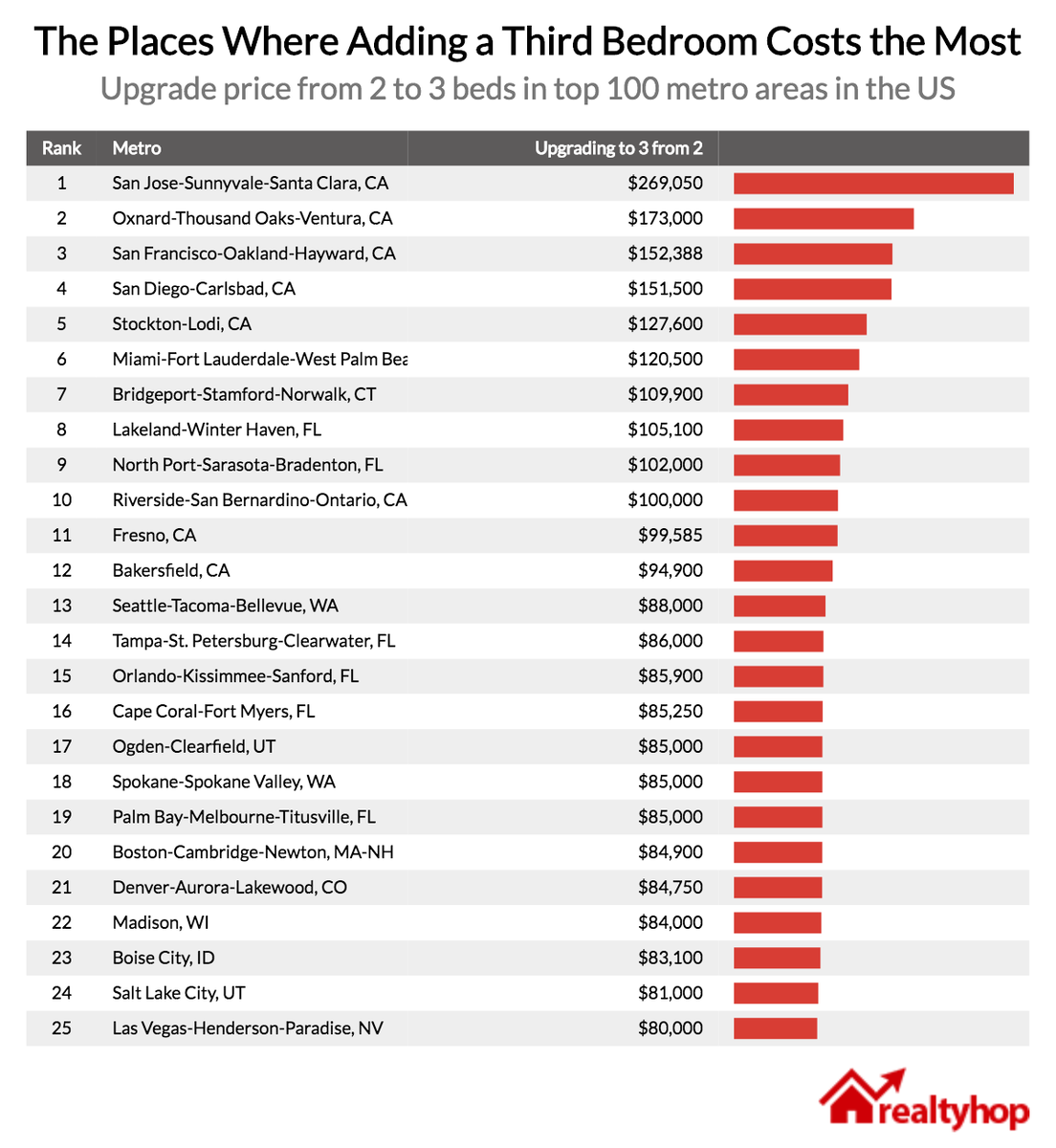 And what if you are expecting twins or triplets and need to get a four bedroom home instead of a three bedroom? The chart below shows the most expensive places to upgrade to add that extra bedroom: 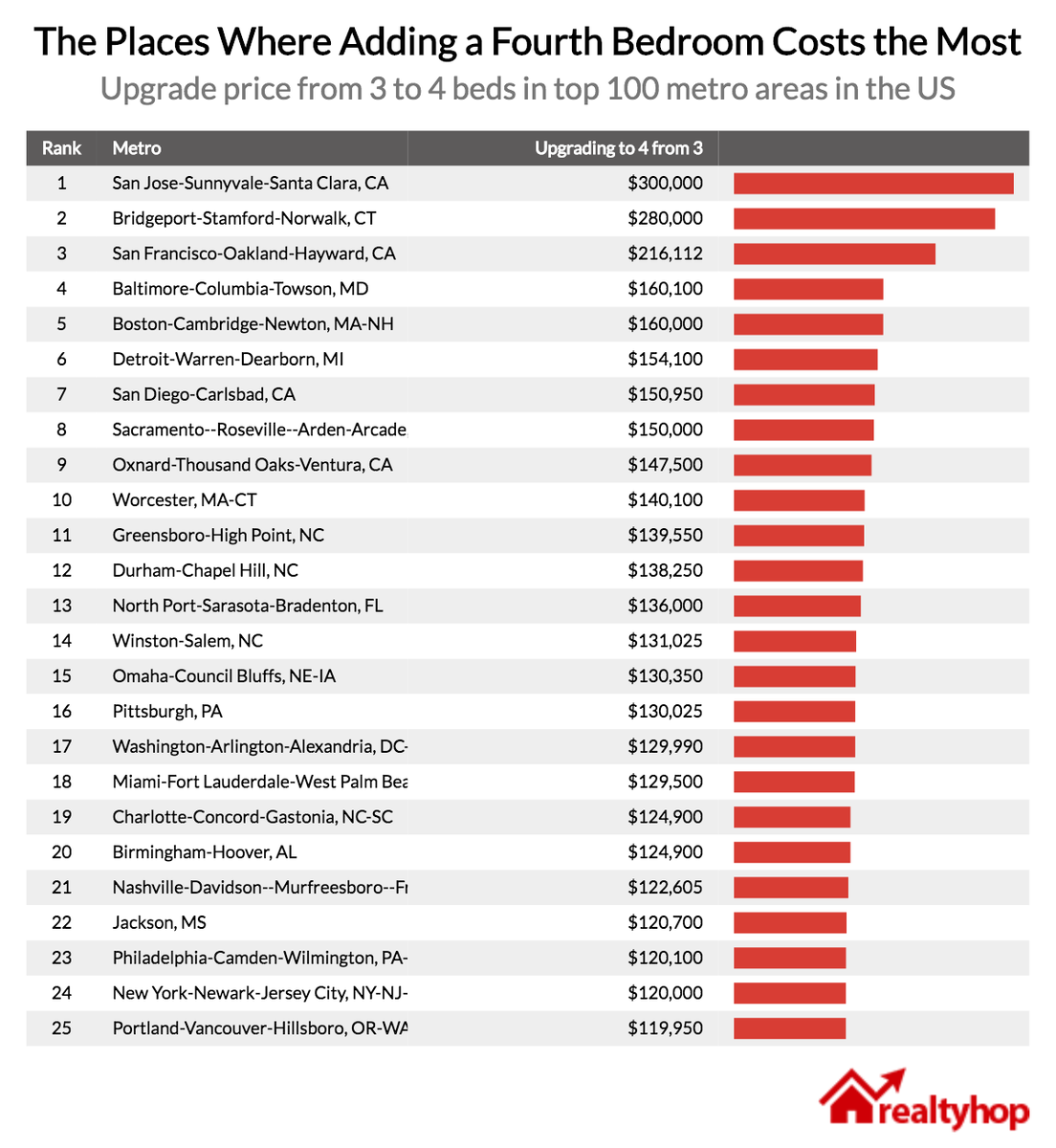 Again, San Jose (and Silicon Valley) take the spot as the most expensive place to add a bedroom. Upgrading to home with four bedrooms in San Jose will cost $300K more than a three bedroom place, beating suburbs in Connecticut and the San Francisco Bay Area which round out the top three most expensive places.

As this analysis shows, if you’re going to upgrade to a house with more bedrooms, it’s going to cost you. Nationally, adding a second bedroom (by moving) costs just $30K, but each additional bedroom costs quite a bit more.  Not only that, but in some cities that extra bedroom can add almost $300K to your purchase price. Given that dynamic, it may make sense to stay put and just build a new bedroom as an attachment to your existing place.

Curious how much a house in your metro area costs based on the number of bedrooms? To conclude, here’s a list of the price of a home by bedroom size in the top 100 metros in the United States: