How Often Do Customers Pay Different Prices for the Same Thing? 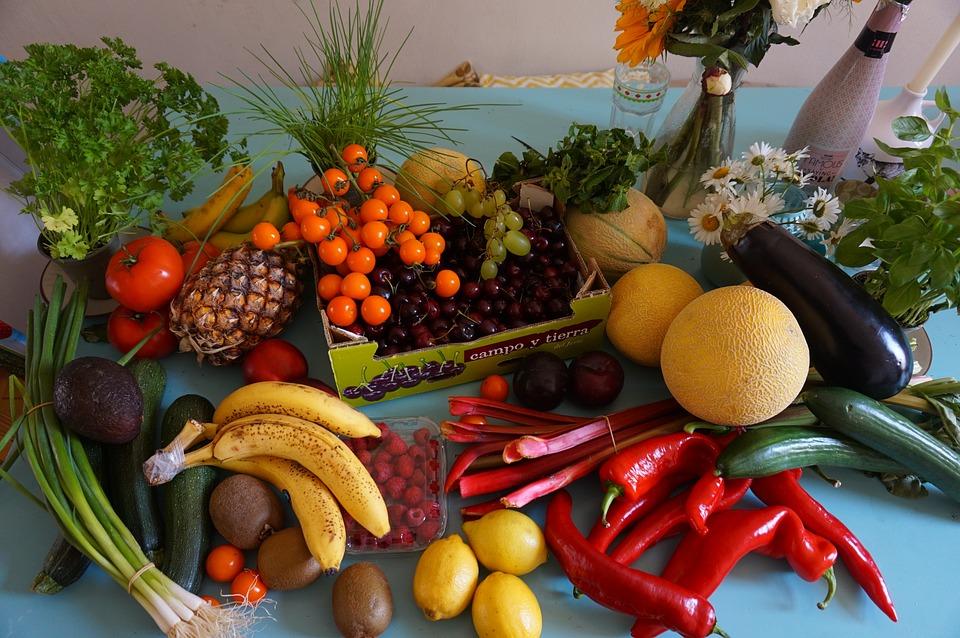 The theory of supply and demand teaches us that consumers will pay the same prices for the same goods in a competitive market.

In reality, however, markets are rarely perfect and prices fluctuate wildly, with people often paying different prices for a variety of reasons. This is especially true in "business to business" markets where pricing can be especially opaque.

One of our customers, Plate IQ, has a massive database detailing just how much restaurants pay for their ingredients. Just how often were restaurants paying different amounts for the same item? We wanted to understand just how common this form of price variation is, so we combined invoice data from thousands of restaurants to create a dataset of millions of individual items purchased over a 90-day period.

We analyzed instances where the same supplier sold the same item to different restaurants for different prices on the same day. There are several reasons that might explain some of this variance – vendors often change their pricing for restaurants based on overall purchase volume, restaurant location, or for a variety of contractual reasons.

Nonetheless, we saw daily price variation for nearly two thirds of items in our dataset. While vendor prices typically varied by less than 25% for an individual item, these price discrepancies can add up quickly.

We first wanted to see just how common supplier price variation is in the restaurant industry. We counted how many days in a 90-day period an item was sold by the same supplier to different restaurants in the same area for prices that differed by more than $0.50.

We were only interested in times where a vendor sold an item at different prices on the same day, since prices for many food items fluctuate seasonally, even weekly, depending on a host of supply factors. 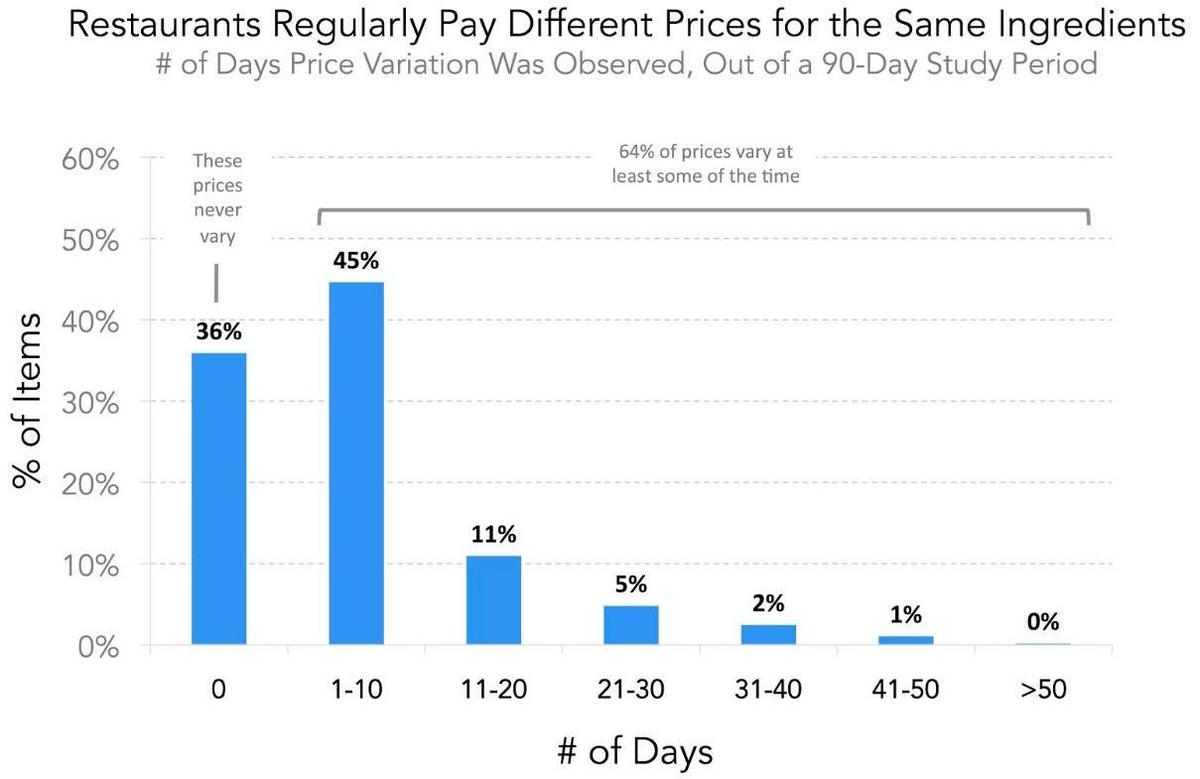 More often than not, vendors were charging different prices for the same item on a given day. Only 36% of items in our dataset were always sold at the same price, so nearly two thirds of ingredients showed some same-day price variation in the 90-day period.

When vendors charge restaurants different prices for the same item on the same day, how large is the price difference? For all items that showed at least some price variation, we calculated the maximum same-day price difference observed over a 90-day period. The distribution of variation sizes is shown below. 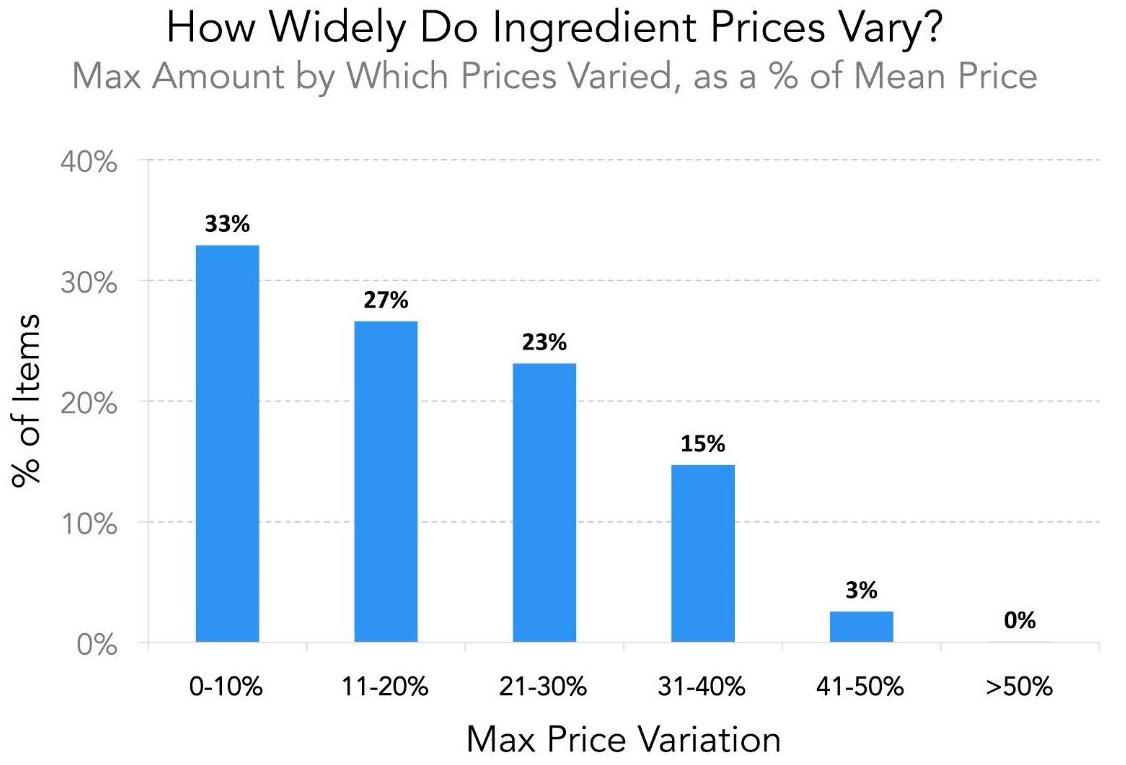 Roughly one third of items shifted in price by less than 10% of their average price. The remaining two thirds showed more dramatic price variations, with vendor prices varying up to 50% for the same item between different restaurants on the same day.

We next looked at which items vendors were most likely to sell for different prices on the same day. We divided the number of days on which we saw price variation by the total number of days that item was sold, and expressed the result as a percentage. The 25 items for which vendors’ prices shifted most dramatically in one day are ranked below. 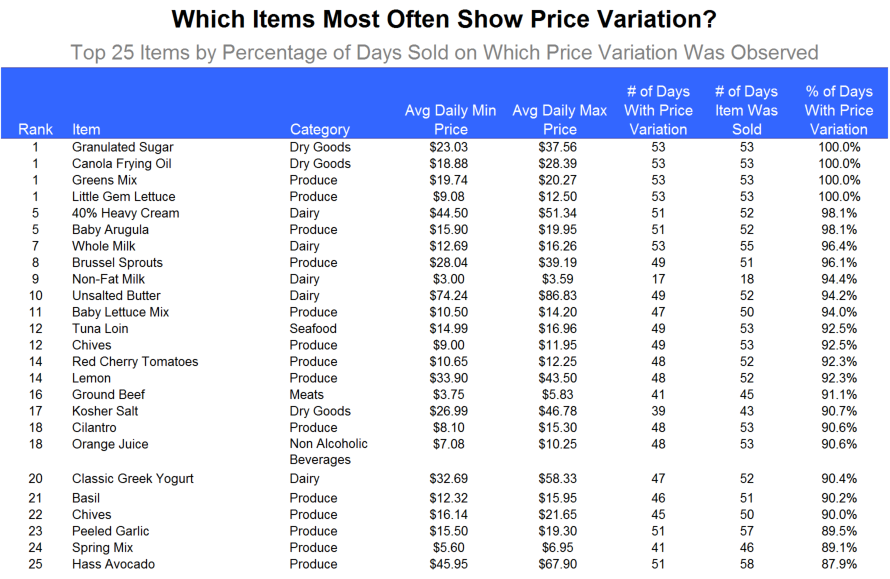 The products with the most variable prices were diverse, encompassing produce, dairy, meats, and dry goods. For the products above, vendors charged prices that varied on 87% or more of the days on which they were sold.

The items we ranked above represent a range of categories. Does that mean that price variation is roughly as common in one category as in the next? To find out, we looked at the percent of products in each category that varied in price at least some of the time. Categories are ranked accordingly below. 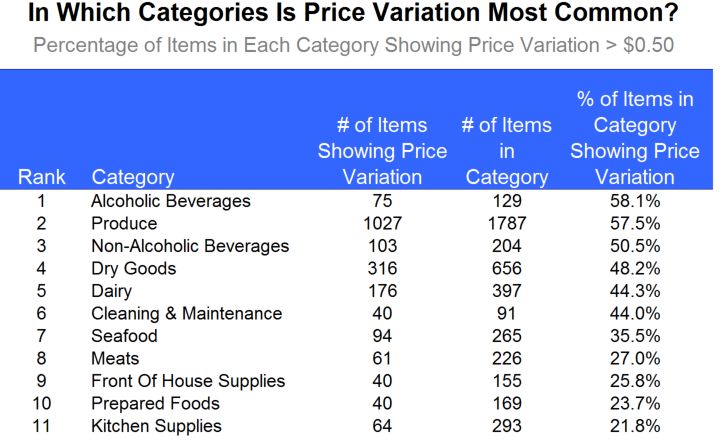 Restaurants are most likely to encounter variation in vendor pricing when purchasing alcohol - nearly 60% of the items in this category showed some price variation. Similarly, in the produce and non-alcoholic beverage categories, vendors charged different prices for more than 50% of the items sold at least some of the time.

Even in the categories where price variation was least prevalent - kitchen supplies and prepared foods – 20% to 25% of products had shifting prices.

Next, we wanted to find the items for which vendors charged the most variable prices to different restaurants. We first filtered our dataset to items with prices that varied on at least 10 days. Then, we took the maximum same-day price variation for each product and expressed it as a percent of the average price. The 25 items with the greatest price variation are ranked below. 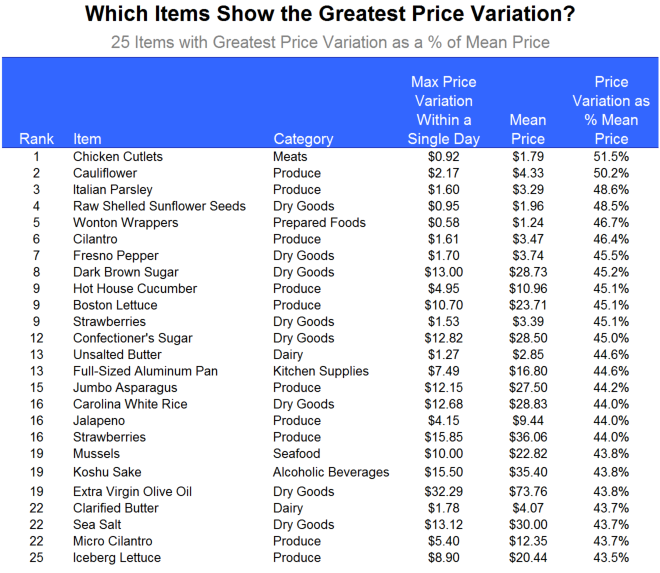 Prices for these top 25 products swung up to 52% in a single day between different restaurants purchasing the exact same product from a given vendor. At the top of this ranking, for example, the cost of a chicken cutlet shifted by nearly a dollar within a single day. And some unlucky restaurateurs have paid up to $41.73 for Domino Dark Brown Sugar - ranked 8th on our list - while their neighbors paid just $28.73 from the same supplier.

We also wanted to summarize price fluctuation magnitude by category. We calculated the average price variation (as a percent of mean price) over all items within each category, and ranked the categories by this figure. 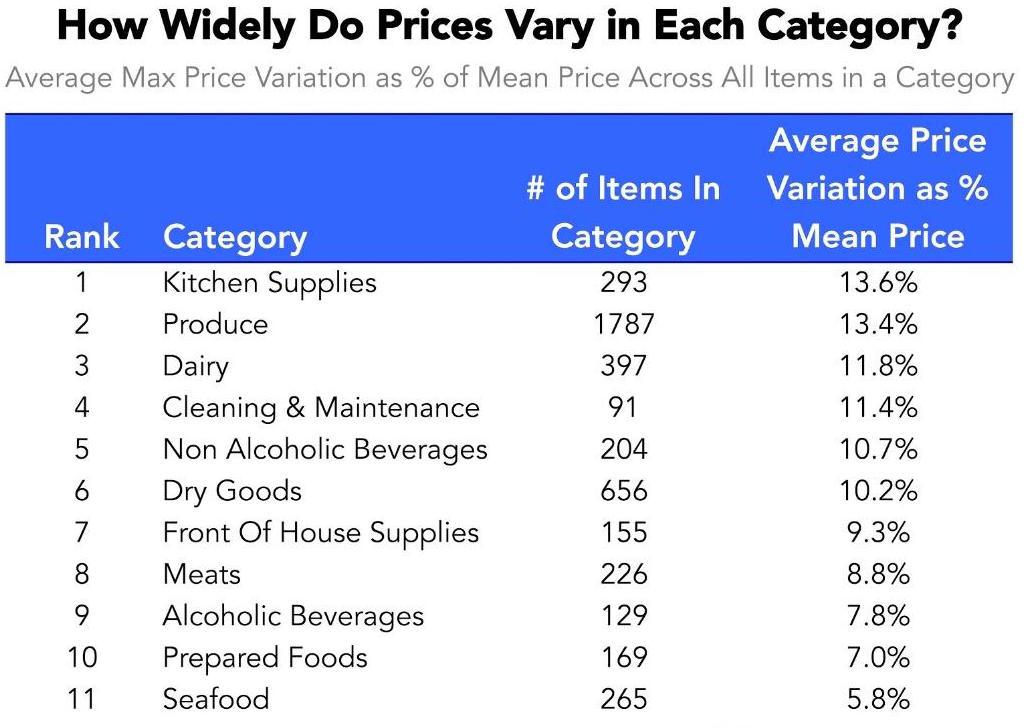 Our analysis of the frequency of price variation above showed that kitchen supplies are among the items least likely to be sold for different prices. But this table shows that when prices do swing, they swing by a lot; the average kitchen supply varied in price by nearly 14%.

Seafood, prepared foods, and alcohol had the lowest average price variation, and perhaps thankfully so: because seafood and alcohol were among the top 3 most expensive categories overall, upward pricing shifts in these categories could have the greatest impact on restaurants’ margins.

Finally, we wondered if there was a straightforward explanation for all these price shifts. Could it be that restaurants are being quoted different prices from the same vendor simply because they’re buying different quantities of that item, and receiving volume discounts? To find out, we assessed whether an item’s price was positively, negatively, or not correlated with quantity purchased. We summarize the percent of items that fell into each category below. 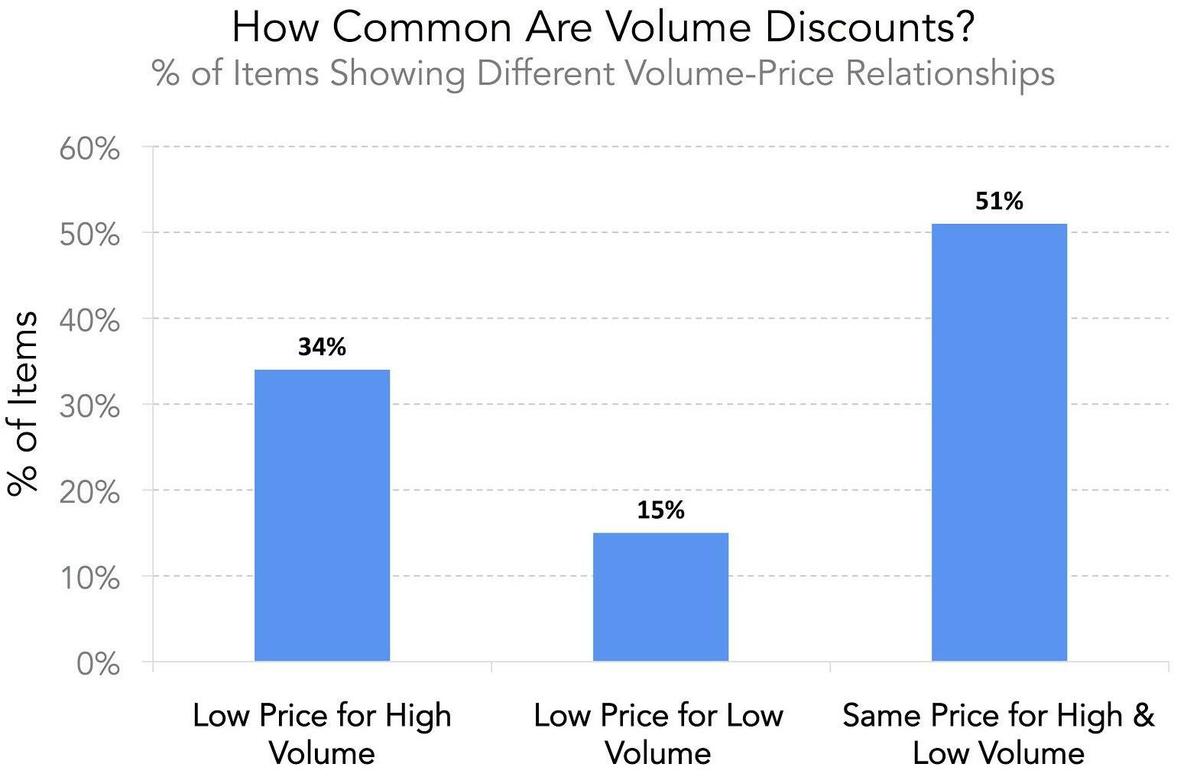 For about 50% of items, there was no relationship between price and volume purchased of that item. In other words, the price might have shifted, but not in a way that was correlated with purchase volume. Of the items that did show a relationship between price and quantity, we more often saw that high-volume purchases were priced lower - a trend that reflects bulk discounting. That said, 15% of the time the restaurant getting the best price was actually buying a lower quantity!

So does this mean volume discounting does not exist in the restaurant industry? Not exactly. More commonly, vendors will give a discount to restaurants based on the total amount purchased from a vendor for all items on the bill versus the amount of a single item.

So when are restaurateurs most likely to encounter different prices for the same item on the same day from the same vendor?

Most items show some price variation, typically on the order of a few dollars per unit (or within 20% of the average cost). Alcoholic and non-alcoholic beverages and produce items are most likely to swing in price, but kitchen supplies, produce, and dairy prices swing the most when they do vary in a given day.