How Often Do Freelancers Get Paid Late? It Depends If You’re a Woman or Man 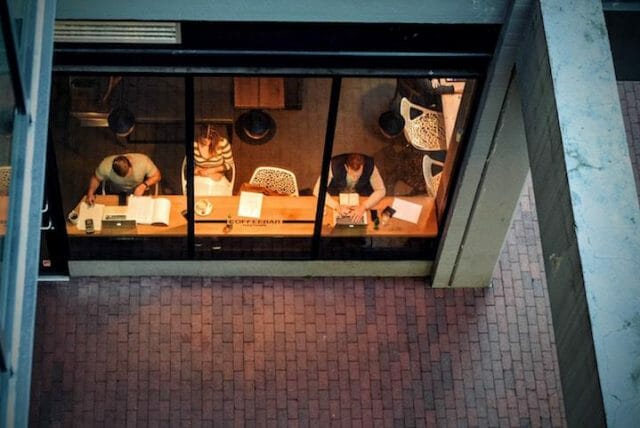 It seems obvious that you should get paid for the work you do.

Unfortunately that’s not always the case for freelancers. In addition to irregular income streams and projects, freelancers have to deal with clients that don’t pay on time. This makes an already hard job even harder.

Freelancers assume late payments are a professional hazard, but just how common are they, and what factors influence whether a freelancer is paid on time?

Bonsai, which provides business management and automation tools to 100,000+ freelancers, analyzed 3 years of invoicing data to find out. The invoices covered all types of work, from digital design and development to photography and marketing. That data includes demographic info on the freelancers themselves, as well as info on their projects and payments.

Some of the findings weren’t surprising: 29% of invoices were paid late.

Other data points were more shocking: female freelancers were paid late 31% of the time, versus 24% of the time for male freelancers. We also learned that cryptocurrencies are terrible payment methods for freelancers, resulting in almost 3x more late payments than other payment options like bank transfers.‍

29% of freelance invoices are paid late

We started by looking at how likely a freelancer’s invoice is to be paid late. We counted an invoice as paid late as one that one paid even one day past the due date. Most freelancers give clients 2 to 4 weeks to pay an invoice once it’s sent.‍‍ Clients pay late for many reasons. They can simply be busy, which affects all companies, from the bureaucratic slowness of large organizations to the hectic disorganization of small ones. Clients can also be bullies, who see freelancers as powerless to enforce on time payment. Freelancers can also be to blame if they don’t set and stick to a clear payment schedule.‍

However, certain factors influence late payments regardless of the freelancer’s abilities or client’s size. 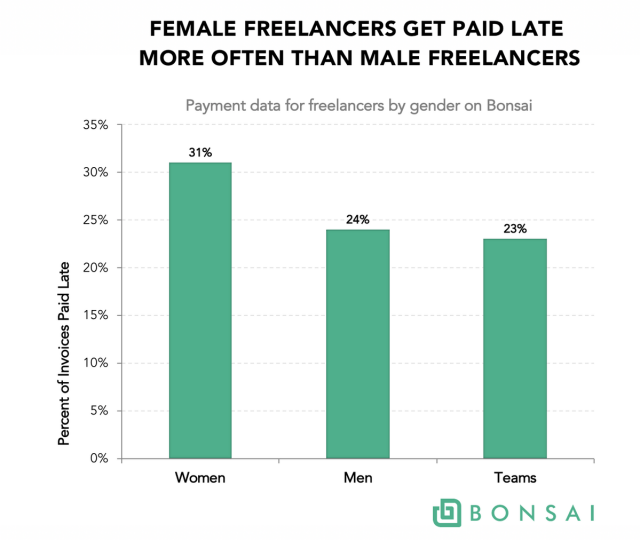 This effect persisted even when we controlled for the freelancer’s skill set or experience and client’s size.

Want to get paid on time? Avoid cryptocurrencies.

How a client pays a freelancer also significantly influences whether that invoice was paid on time. Payment via cryptocurrencies were late almost 3 times more often than those with ACH or bank transfer.

These late payment rates were the same even when we accounted for the slower processing time of ACH / bank transfer (up to 7-10 business days) versus the relatively quick transfer times of bitcoin. Unsurprisingly, cash and check are also a slow payment method, given the friction needed for the client to withdraw cash or physically write and deliver a check. Common digital payment methods, such as credit and debit card via Stripe or Paypal represented the average.‍

Freelancer Marketers are most likely to be paid late.

Another interesting finding is how the type of work a freelancer does influences their likelihood of being paid late. While many would expect higher earning freelancers like software developers and designers to be paid on time, they were paid late 29% and 28% of the time, while more traditional freelancers like writers and photographers enjoyed relatively fewer late payments (26% and 24% respectively).

There are several hypotheses for why freelancers or certain skills are paid on time more than others. It can do with the fact that writers and photographers have a more defined work product to turn over (a blog post or an essay), and can use that as leverage in payment. Designers and developers have also relatively higher earning than writers and photographers, so it can also be that they have more of a cash buffer and are more willing to let late payments slide. For more information, check our study on freelance rates to see how rates differ across skills, experience and locations.

This likely has to do with the steps and authorization necessary for clients to pay larger amounts. Interestingly, we found little relationship between payment size and payment method. Some clients will happily pay a $15,000 invoice with a credit card, while other prefer a bank transfer for even $150 invoices.‍

Freelancing can be a rewarding career: you get the flexibility to set you own path and control your destiny. However, these benefits come with risks, especially getting paid late. You can do things like avoid payment via cryptocurrencies or invoicing for large amounts at once, which make you 3 times more likely to get paid late than other payment methods or small invoices.

However, some things, such as your type of work or even your gender, can be harder to change but just as impactful on your payment prospects. Unfortunately for freelancers, it’s not just the work you do, but how you charge and who you are, that determines whether you get paid on time.