How Partisan Is Congress, Anyways? 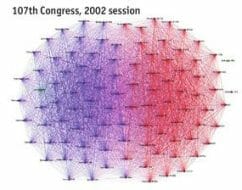 The Degree to Which Senators Vote the Same Way. Source: The Economist.

The two-week Federal government shutdown in early October brought international attention to the level of polarization afflicting American politics. “We moderates are an endangered species,” Representative Jim Cooper of Tennessee told the Times.

A recent analysis by The Economist shows to what extent Republicans and Democrats can’t get along. The graph above represents the voting habits of Senators. Each node is a Senator, with blue connoting Democrat, and red connoting Republican. The placement of nodes is based on cooperation levels, thus placing more bipartisan Senators closer to the center.

In 1989, voting habits had a considerable amount of overlap across party lines; the graph for that year’s session of Congress looks like a ball of yarn. However, over the past fourteen years, overlap has become less and less common. By the 113th Congress (the 2013 session), the once closely-knit network had been nearly cleaved down the middle.