How Sad Do You Get When Your Candidate Loses? 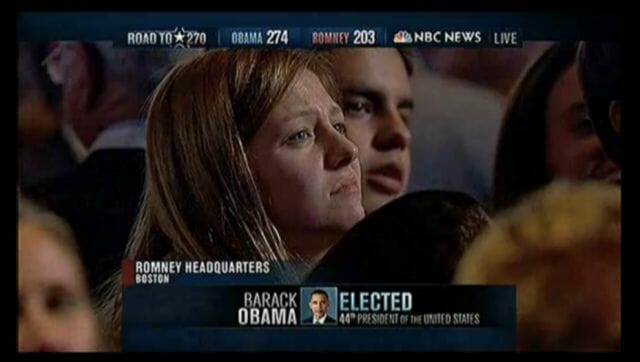 A still from NBC News coverage of Romney campaign headquarters, following his defeat

“I feel very depressed,” former U.S. ambassador John Price told a reporter, about Mitt Romney losing the presidential election in 2012. “It was a very depressing evening, I thought we would win.”

He was far from alone. Every year, men and women don their red and blue suits and ties and hit the campaign trail to sell Americans on their personal vision for the future. And, every November, many of these candidates lose, and millions of Americans are disappointed. A working paper out of Harvard, titled “Losing Hurts: Partisan Happiness in the 2012 Presidential Election” offers quantitative evidence that there’s no hangover like the wave of sorrow that hits losers after a ballot-count.

“How happy are you today — very happy, happy, so so, unhappy, or very unhappy?”

They also were able to gather a panel of “detailed demographic and attitudinal data” for many of these respondents — including their political party affiliation. Assuming that their samples were relatively stable in composition before and after the election, they looked at how people answered this question surrounding the 2012 presidential victory for President and Democrat Barak Obama, and the defeat of Republican Nominee Mitt Romney.

Researchers found that the day after their candidate’s loss was announced, the percentage of Republican respondents who said they were “very happy” or “happy” dropped from about 60% to about 30%. There was little change in the likelihood of Democrats reporting happiness. 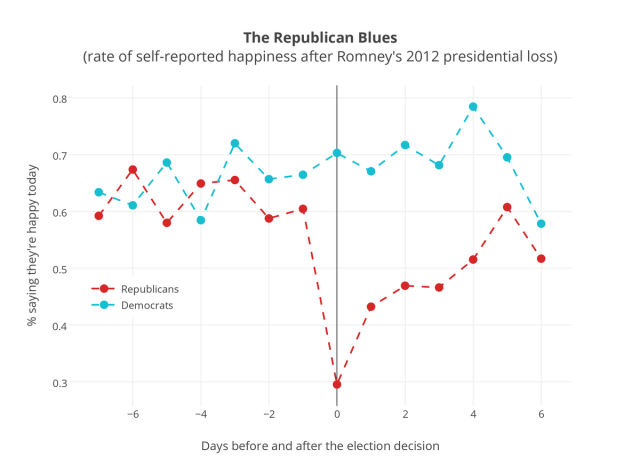 A higher percentage of people were upset about losing the presidency than were lifted to happiness by winning it. In fact, more Republicans reported feeling unhappy in the days after losing the election than parents did after Sandy Hook Elementary School Shooting, and than Boston Area residents did after the Boston Marathon Bombing (to gauge the magnitude of the effect, the researchers compared it to public reactions to national tragedies around the same time as the election).

This finding that “the pain of losing the 2012 Presidential Election dominated the joy of winning it,“ is consistent with existing research that “bad” events in our lives immediately impact us more than the “good” ones. Humans are loss averse. From the New York Times:

“In an experiment in which participants gained or lost the same amount of money, […] the distress participants expressed over losing the money was greater than the joy that accompanied the gain.

‘Put another way, you are more upset about losing $50 than you are happy about gaining $50,’ the paper states.”

In a way, the emotional impact of a political loss on supporters isn’t that surprising — thinking that your country elected the wrong person is a big deal — when Lincoln was elected, the South seceded.

“This election was really about saving America,” a Romney supporter told a CBS political analyst in 2012. “And I get really emotional about that.”

Researchers point out that they’ve yet to test for this effect in different elections, and different contexts. So if Democrats and Liberals have been feeling bad about losing the Senate this year, maybe it’ll comfort them to know that their feeling of gut-wrenching crappiness is science in action. The Republicans went through the same thing in 2012, and if they’re any example, the effect mostly wears off within a week (that’s today!). In three more weeks it will be “statistically indistinguishable”.