How the World Gets Its Caffeine Fix 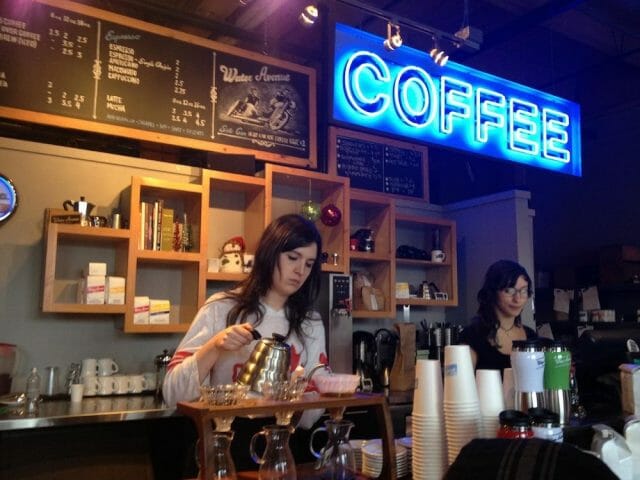 “If I can’t drink my bowl of coffee three times daily, then in my torment, I will shrivel up like a piece of roast goat.”

“Drinking culture” might evoke the image of pounding shots at the local tavern. But there’s a bit more nuance to what we drink. For starters, it’s not all about alcohol. Like moths to a flame, people all around the world are drawn to caffeine: 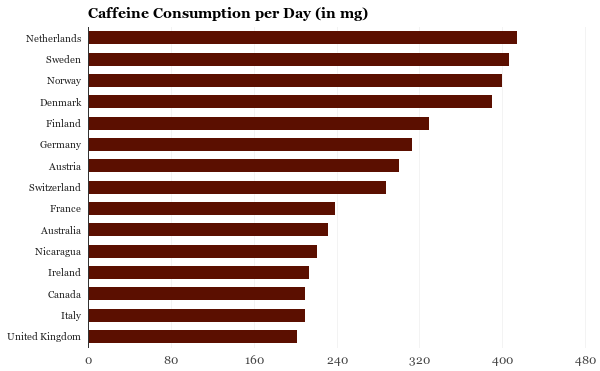 The Dutch consume the most, at 414 mg per day. As a reference point, a cup of McDonald’s brewed coffee has 100 mg of caffeine. The next three top caffeine junkies are the Swedes, Norwegians, and Danes. Americans consume 168 mg of coffee daily, which puts them outside the top 15.

Just looking broadly at caffeine, though, hides some specific consumption trends. For example, Paraguayans get over 60% of their caffeine from maté, a traditional South American drink. For most everywhere else, coffee or tea provides people their daily fix.

With a Starbucks on every block, you’d think that Americans drink coffee by the boatload. But our annual per capita consumption ranks 25th globally, at a modest 4.2 kg per person. Where, then, are the world’s biggest coffee fiends? Finland. 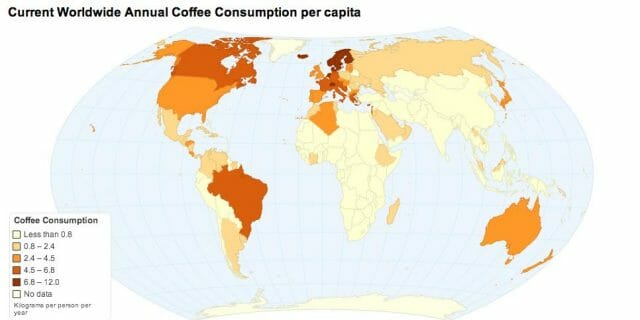 It looks like Nordic countries have a stranglehold on the coffee game. The top consumers worldwide are Finland (who drink almost 3x as much as Americans), Norway, Iceland, and Denmark: 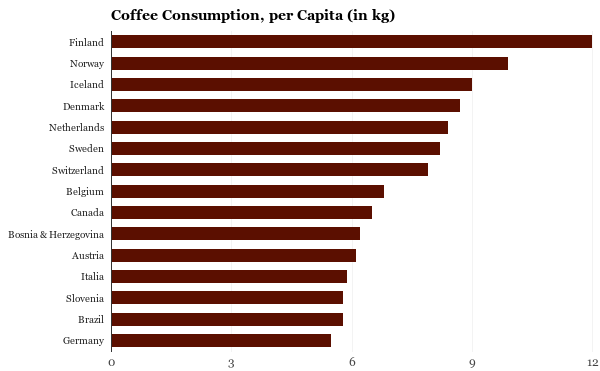 This shouldn’t be surprising to anyone who has ventured to Scandinavia: according to Sweden.se, the coffee culture is one of the most important things a newcomer needs to know about before visiting.

Millions of people around the world love getting those early-morning java jitters. But why do some countries drink much less coffee than others? Part of the reason is because they drink tea instead: 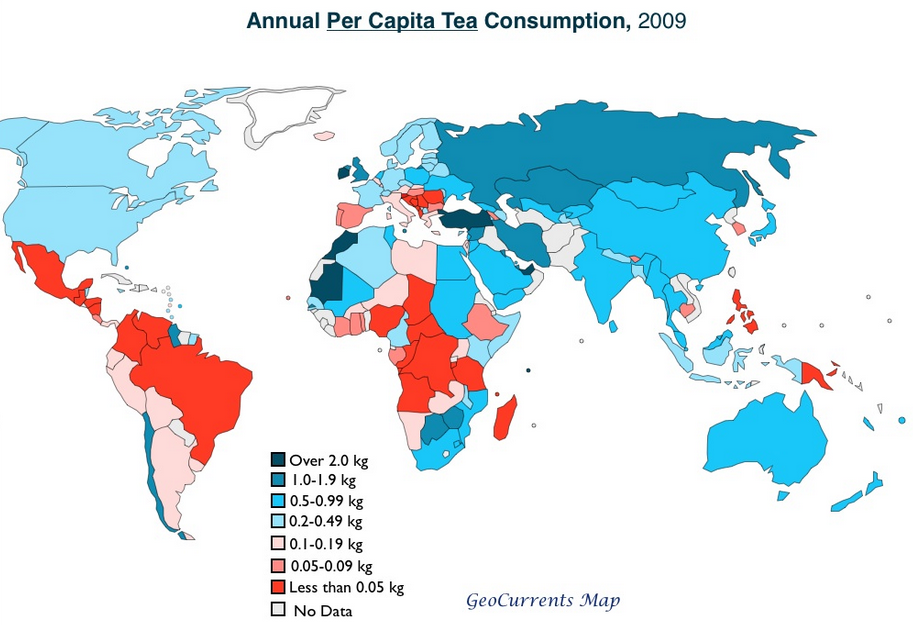 The countries that don’t drink much coffee are among the top tea drinkers in the world, especially Turkey and Morocco: 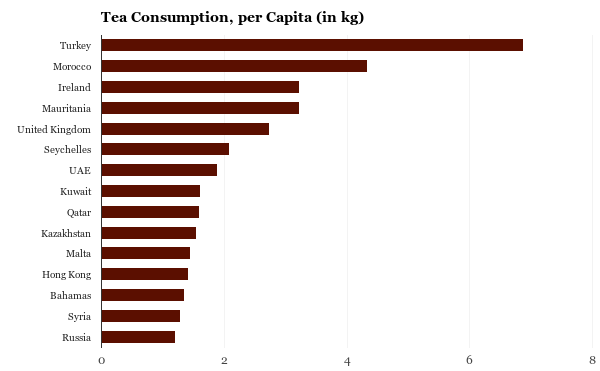 While it looks like Turkey and Morocco drink a lot of tea, they consume a lot less than the top coffee drinkers. The average cup of tea has about half the total amount of caffeine as does a cup of coffee, so maybe people in these countries are tired all the time?

The graphs above don’t account for another common source of caffeine: soda. The United States and Mexico in particular love their carbonated corn syrup. They are the world’s top soda consumers: 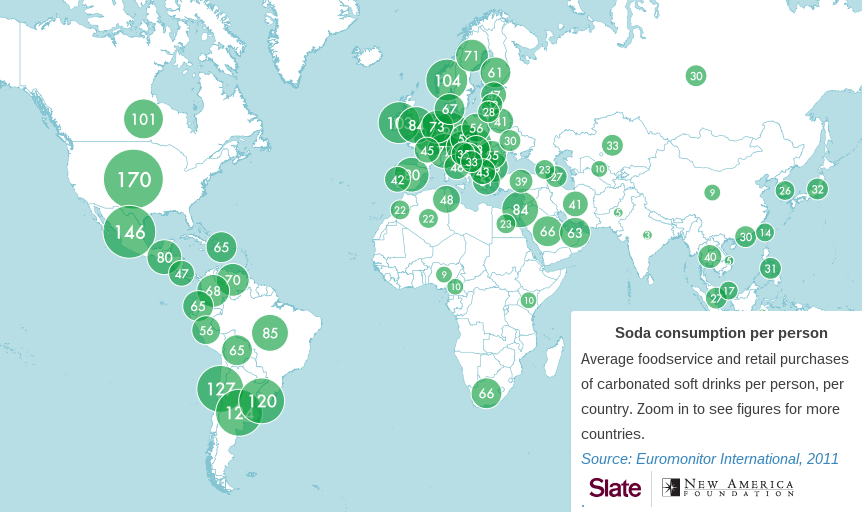 The world’s top 5 soda drinkers are all in the Americas. No wonder we’re a bunch of fatties! How does Europe compare: 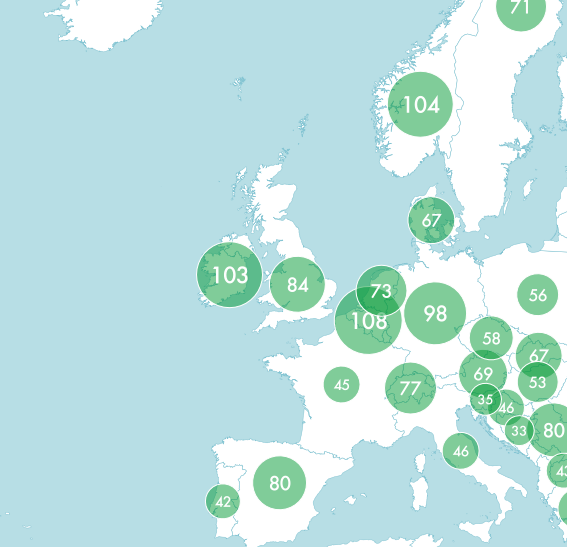 So now you know how the world drinks its caffeine. Sample the sodas in Mexico. Hit up Istanbul for tea. And pass through the colder parts of Europe for your coffee.