How to Be a Lawyer Without Going to Law School

“I have some clients who look up on my wall and say, ‘Where did you go to law school?’ and aren’t too happy with the answer.”

This weekend, thousands of young prospective lawyers across the nation will receive the results of the July 2015 bar exam. Those who pass will be one step closer to practicing law in their state; those who fail must retreat from society once again, hit the books, and wallow in the depths of misery until the next exam in February.

A select few, however, have completely bypassed these steps. Several U.S. states offer a little-known alternative path to the bar exam room: “reading the law” — or serving as an apprentice in the office of a practicing attorney or judge.

Last year, out of 83,963 bar exam takers, only 60 were apprentices. A mere 17 succeeded in passing the bar exam and becoming eligible to practice law. It is a long, difficult road, requiring four years of mentorship and thousands of hours of self-led work, but when completed, it can save a prospective lawyer hundreds of thousands of dollars in law school debt.

So, just how does one go about doing this?

A Brief History of Law Apprenticeship in the United States 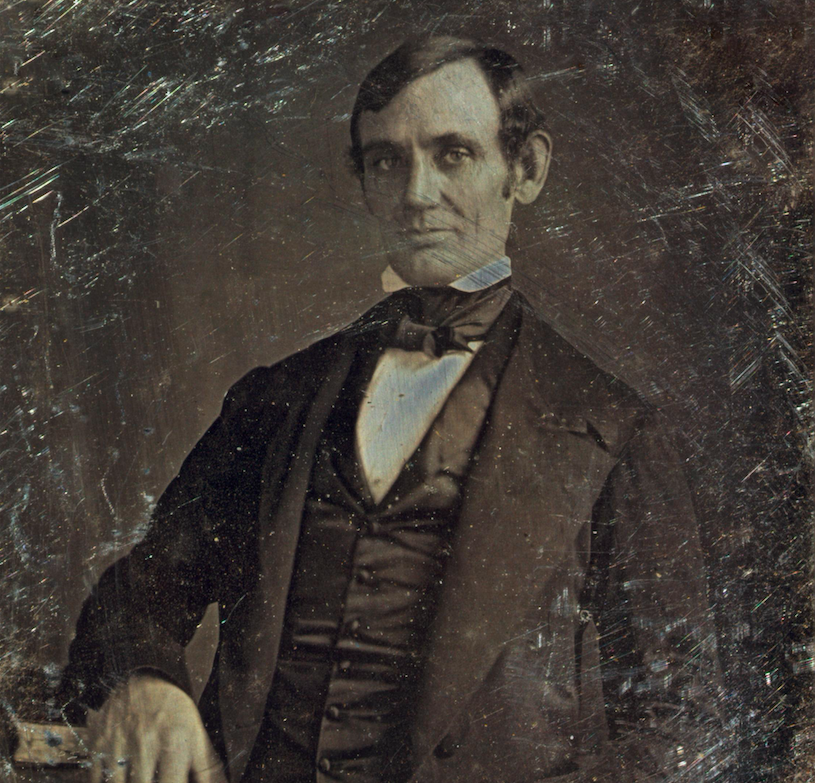 Today, going to law school and securing a JD degree is legally required to practice law in most states. But in the expanse of American history, this requirement is relatively new.

In the colonial United States, nearly all legal professionals were “imported” from England, where they were trained not through formal education, but an apprenticeship system called the Inns of Court. In this system, those who wished to practice the law had to make a connection with a lawyer (“barrister”), who would provide them with training.

By the 1730s, a similar apprentice system had sprouted up in New York: in addition to passing a state-administered bar examination, all American lawyers had to serve a seven-year clerkship before being eligible to practice. As recounted in the Washburn Law Journal, this was a brutal, scrupulous undertaking:

“The clerkship program required much individual study. The mentoring lawyer was expected to carefully select materials for study and to guide the clerk in his study of the law to ensure that the material was being absorbed. The student was supposed to compile his notes of his reading of the law into a ‘commonplace book’, which he would endeavor to memorize.

Although those were the ideals, in reality the clerks were often overworked and rarely were able to study the law individually as expected. They were often employed to tedious tasks, such as making handwritten copies of documents. Finding sufficient legal texts was also a seriously debilitating issue, and there was no standardization in the books assigned to the clerk trainees because they were assigned by their mentor, whose opinion of the law may be different greatly from his peers.”

In the early 1800s, colleges began offering law degrees as an alternative to the apprenticeship program. But with courses focusing on a wide range of subject matter — Biblical studies, Aristotle, Adam Smith, Montesquieu — the schools, in actuality, didn’t do much to prepare students for the bar exam. A number of highly influential historical figures chose to stick to the apprenticeships, most famously Abraham Lincoln: 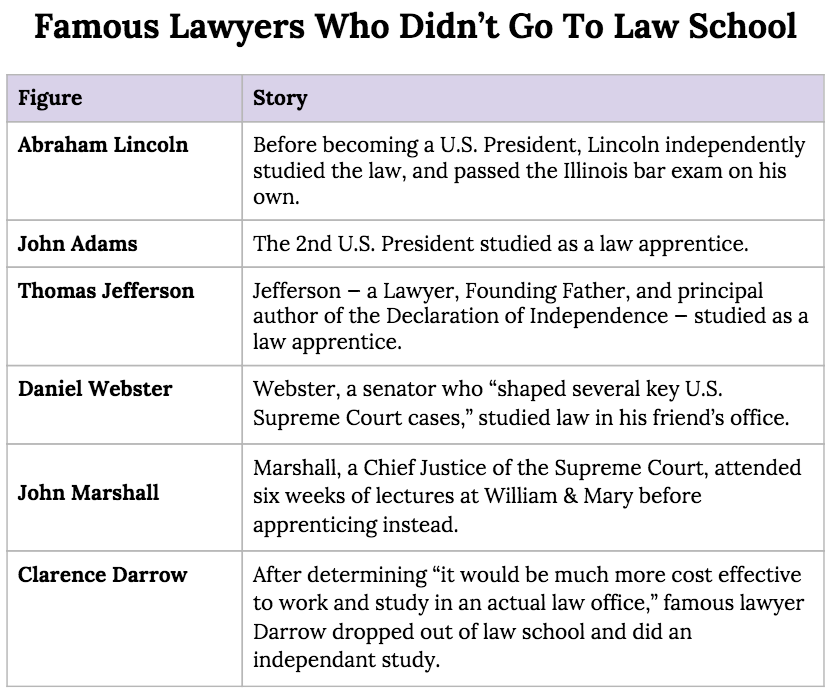 “If you are absolutely determined to make a lawyer of yourself the thing is more than half done already,” Lincoln famously wrote in 1855. “It is a small matter whether you read with any one or not; I did not read with anyone...always bear in mind that your own resolution to succeed is more important than any other one thing.”

Until the 1870s, a combination of independent study and apprenticeship was the prototypical path of a lawyer. Then, the American Bar Association (ABA) changed everything.

Formed in 1878 by a group of 100 lawyers from 21 states, the ABA frowned upon self-led study of the law, calling for a “national, uniform code of ethics.” Throughout the ensuing decades, it lobbied tirelessly, convincing almost every state to only allow law school students to take the bar exam (and ultimately, become lawyers). 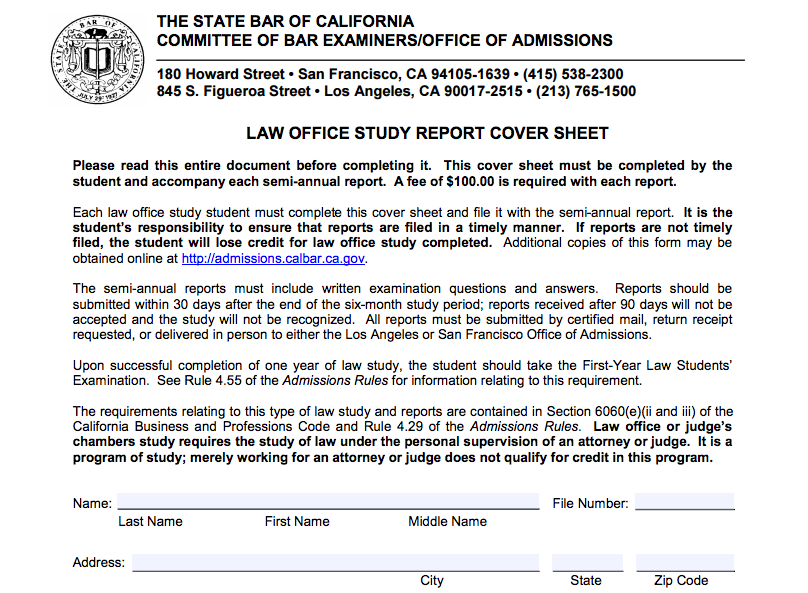 Today, only four states — California, Virginia, Vermont, and Washington — allow aspiring lawyers to take the bar exam without going to law school. Instead, they are given the option to apprentice with a practicing attorney or judge. (New York, Maine and Wyoming offer an apprenticeship alternative as well, but also require some law school.)

In California, this option is called the “Law Office Study Program” (rule 4.29 under the state bar’s legal code). All lawyers seeking to forego law school must meet the following stipulations:

Even assuming an apprentice settles this dilemma, fulfills four years of independent study, and passes all precursory exams, the bar exam is not in his or her favor. A crawl through historical exam data (1996 to 2014) via the National Conference of Bar Examiners reveals a wide variance in pass rates from state to state: 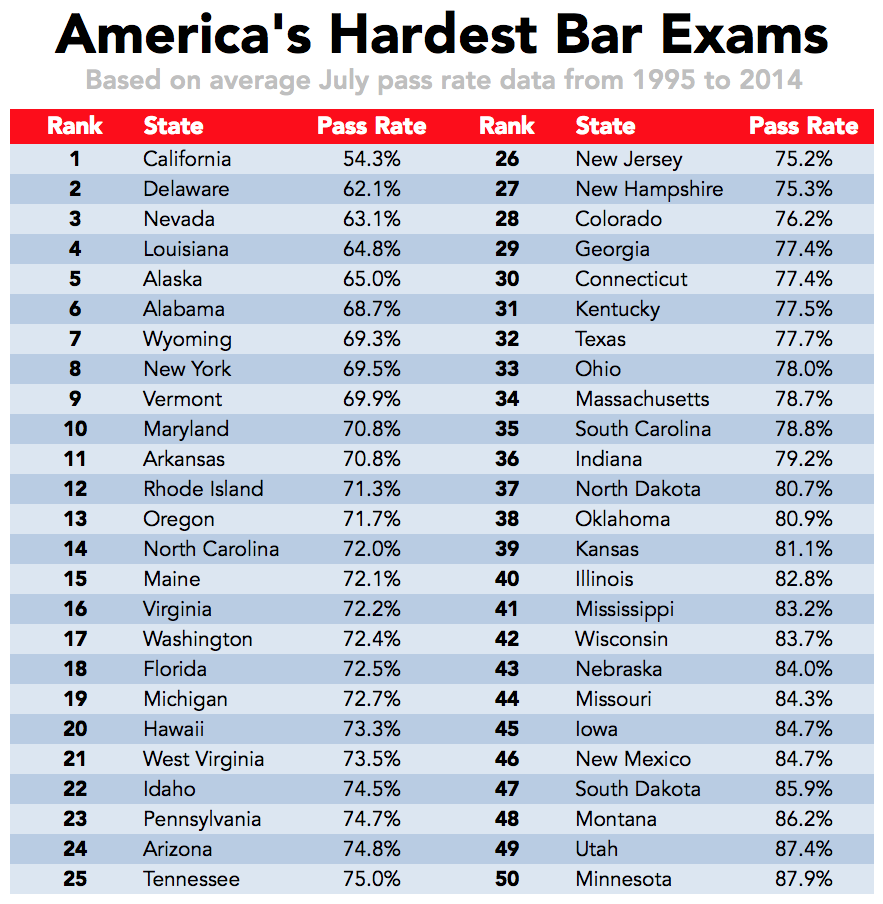 But these numbers represent the results for all test-takers, most of whom are law school graduates. The numbers for those who take the apprenticeship route are much more dismal.

Of the 60 apprentices who took the bar exam last year, only 17 (28%) passed, gauged with an average pass rate of 73% for students who attended ABA-approved universities. Going back historically, the passage rates for apprentices are slightly better, but still among the worst of any education type: 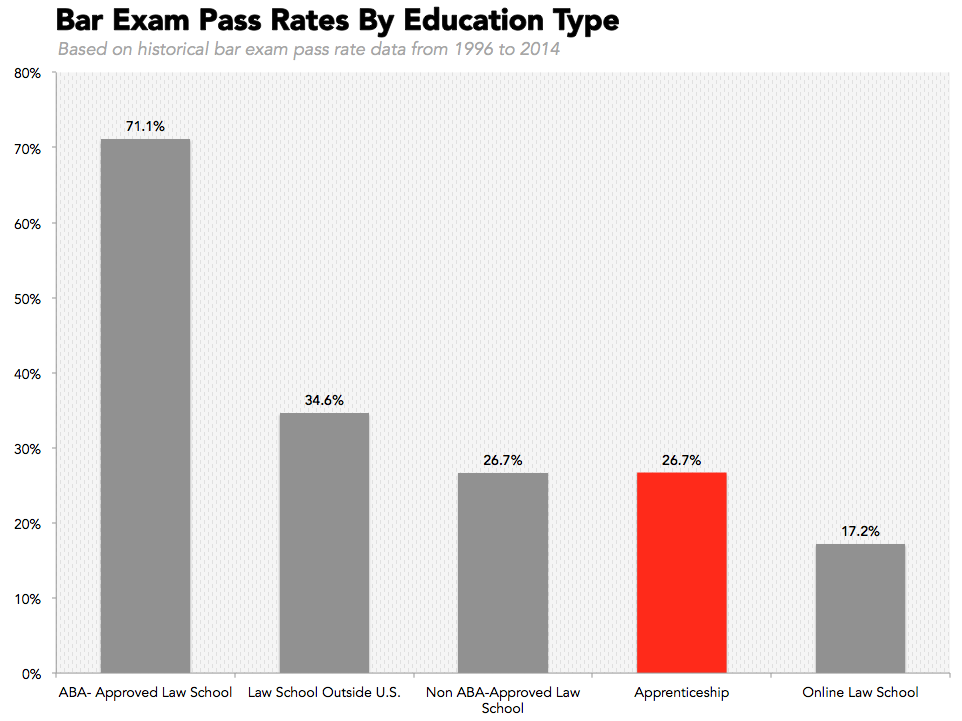 Since 1996, 1,142 apprentices have taken the bar exam; only 305 have passed. Likely, this can be attributed to the nature of an apprenticeship: in a law office study, an apprentice is working under one lawyer, who usually has a specific focus, while law school covers a much wider breadth of topics.

Breaking down these passage rates by state does, however, reveal a glimmer of hope. 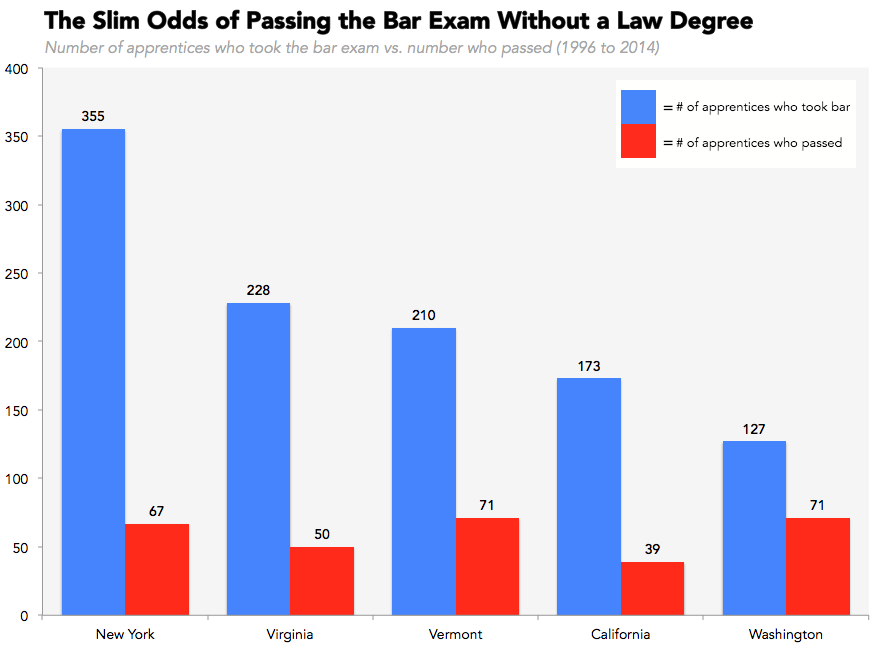 While bar exam pass rates in other states range from 18% to 33%, Washington state has a surprisingly high pass rate, at 56%. Washington’s state bar, more than any other state’s, provides extensive support for students who choose to apprentice, including a volunteer network who sets study standards and monitor progress. Last year, these resources resulted in 67% of Washington apprentices passing the bar exam, nearly as high as those who graduated from ABA-accredited schools.

California’s state bar, on the other hand, seems to discourage apprenticeships.

After graduating from Berkeley with a Bachelor’s Degree, Christina Oatfield decided to apprentice under California's Law Office Study Program rather than go to law school. But it wasn’t until after she graduated that she became aware of this option. “The state bar doesn’t advertise this program really well,” she says. “There is info on their website, but you really have to search for it to find it.”

She is now about halfway through her four-year apprenticeship with an attorney at the Sustainable Law Economies Center, a local non-profit.

“I don’t think apprenticeships are for everyone,” she admits. “Law school comes with structure — tests, deadlines, a classroom environment — and some people need that. But at the same time, I don’t think law school prepares you to actually practice law, and I’m getting hands-on experience every day.”

Apprenticing in lieu of law school also comes with obvious financial benefits. While most law school graduates wallow in hundreds of thousands of dollars of debt, and have to take “soul-sucking” corporate jobs to recoup losses, apprentices can enter the profession debt-free, and retain the option to take on more humanitarian causes.

“There is very little that would entice me to go $100,000 or more into debt for a credential,” one law apprentice jokes. Many of his colleagues share this opinion. 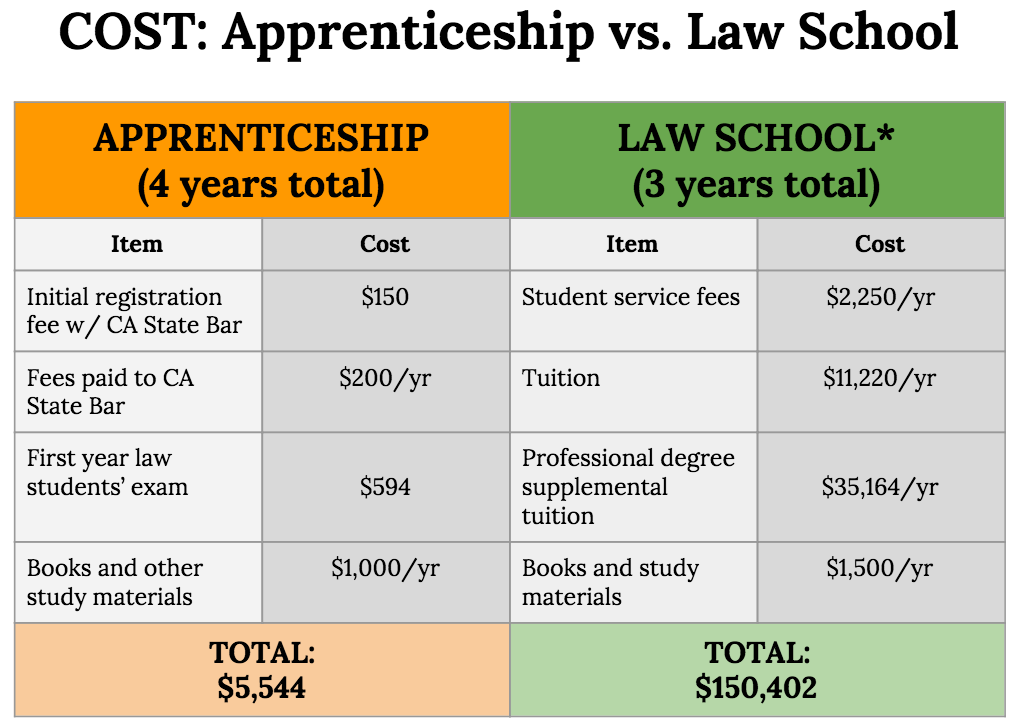 But even when law apprentices successfully pass the bar exam, and find themselves officially equipped to practice law, they must face the degree-obsessed nature of their industry. Most of America’s prestigious law firms only recruit from top-tier law schools, putting the best positions out of reach for apprentices.

After reading law for three years and passing the Virginia bar exam, Ivan Fehrenbach has learned this the hard way. “I have some clients who look up on my wall and say, ‘Where did you go to law school?’ and aren’t too happy with the answer,” he told The New York Times. Today, he is a “country lawyer” who helps clients navigate through things like speeding tickets and divorces.

In many respects, the American Bar Association and other overseeing law bodies don’t take apprenticeships seriously, and do everything they can to corral students into three-year, accredited law schools.

Robert E. Glenn, president of the Virginia Board of Bar Examiners, has made his stance on the matter quite clear: “[Apprenticeships] are a cruel hoax,” he has said. “It’s such a waste of time for someone to spend three years in this program but not have anything at the end.”

But despite apprentices’ lower bar exam pass rates and increased hardship in finding employment, perhaps the program should be given more credence. It not only eliminates law student debt, but provides an alternative, more vocational path.

“I wanted to get my hands dirty instead of being cooped up in a classroom,” an ex-apprentice who now defends farm workers told California Lawyer. “And the training I got prepared me for the work I do today.”

Our next post examines how much urine splashes back on you when you use a urinal. To get notified when we post it →  join our email list. A version of this article was originally published Nov 15, 2015.