How to Hack the Price of a Hotel Suite

There’s only one problem: they’re typically a lot more expensive than standard hotel rooms. But that is that always the case?

We analyzed data from Priceonomics customer Suiteness, a site that lets you book hotel suites. We looked at the price of tradtional hotel suites, compared to an interesting hack called the “connecting suite” — suite configurations where more than one bedroom is connected to the living area of a suite — that is typically a lot cheaper. We also looked the price of these suites compared to vacation rentals in top American travel cities.

How much more affordable is a connector suite than a traditional two-bedroom suite? How do these rates compare with a two-bedroom vacation rental? How about two separate hotel rooms?

In this post, we’ll dive deep into our findings — but here’s a quick overview:

A quick note on methodology

Suiteness specializes in accommodations for groups of four or more, so we decided to compare five different two-bedroom options: a suite, a connector suite, two separate hotel rooms, an Airbnb, and a VRBO.

The suite data was sourced from Suiteness, the data for hotel rooms from Expedia, and the data from Airbnb and VRBO from those respective platforms. For each dataset, we gathered rates for high and low seasons and calculated the average between the two for a two weekend nights.

Lastly, for our analysis, we focused on the nine markets for which we had the most data on: New York, Los Angeles, Chicago, San Diego, San Francisco, D.C., Las Vegas, Miami, and Orlando.

Let’s start with the overall averages for each of the two-bedroom accommodations we researched. Keep in mind that the prices below reflect the cost for two weekend nights, averages across high and low seasons. Two-bedroom suites are overwhelmingly pricier than any other option, at $2,665 — or $1,332 per weekend night across the markets we analyzed. VRBO, which primarily features full-space rentals, places second, at an average of $1,718.

At $1,312, the two-bedroom Airbnb edged out the cost of two hotel rooms by $76. But, it should be noted that the Airbnb price here reflects the average of a wide variety of neighborhoods. Most hotel suites are more centrally located, and also offer a wider range of amenities.

The connector suite, at $1,484, is 44% cheaper than the typical two-bedroom suite — a huge value considering that the only real difference between the two is a separate private entrance for the connecting room.

Let’s take a closer look at the price differential between the two, by city. Breaking this data down by market, we can see that prices for certain accommodations vary widely by location. 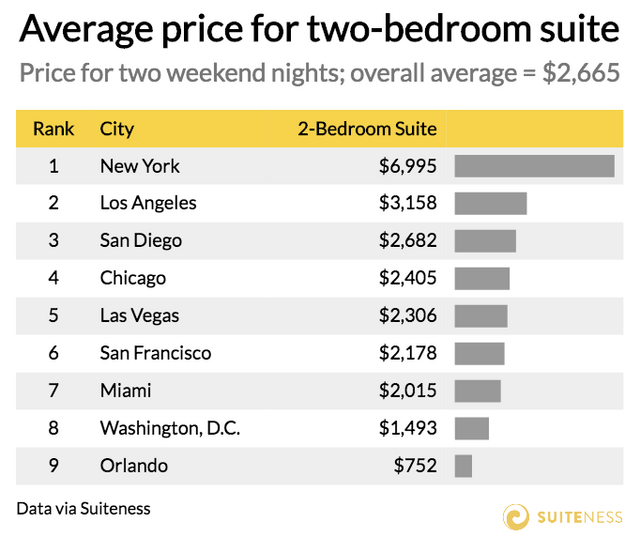 For instance, the average two-bedroom suite across all markets runs $2,665 per weekend, but that ranges from as high as $6,996 in New York to $752 in Orlando. Las Vegas, perhaps most renowned for its suites, runs in the middle of the pack ($2,306). 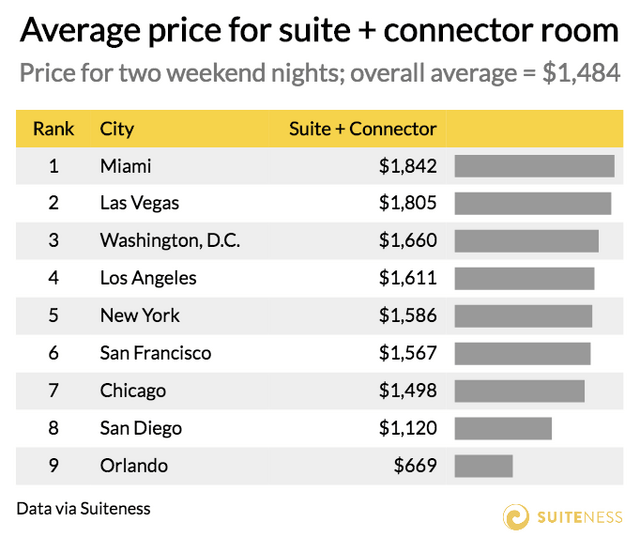 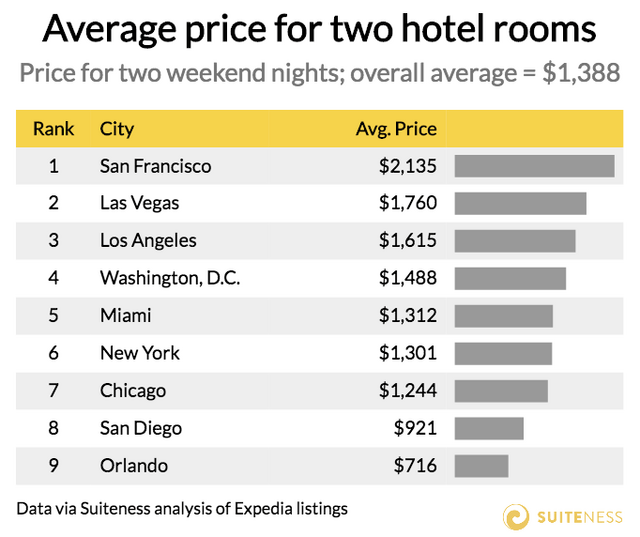 San Francisco — the most expensive rental market in the U.S. — also tops the list for priciest standard hotel rooms, at an average of $2,135 per weekend. For nearly $600 less, you can get a connector suite. Average two-bedroom VRBO rentals range from $3,677 in New York to $888 in Orlando, and overall, at $1,718 per weekend, are pricier than both connector suites and two hotel rooms.

Only Airbnb offers a more affordable alternative than the connector suite — but it typically doesn’t come with the amenities of a hotel suite. 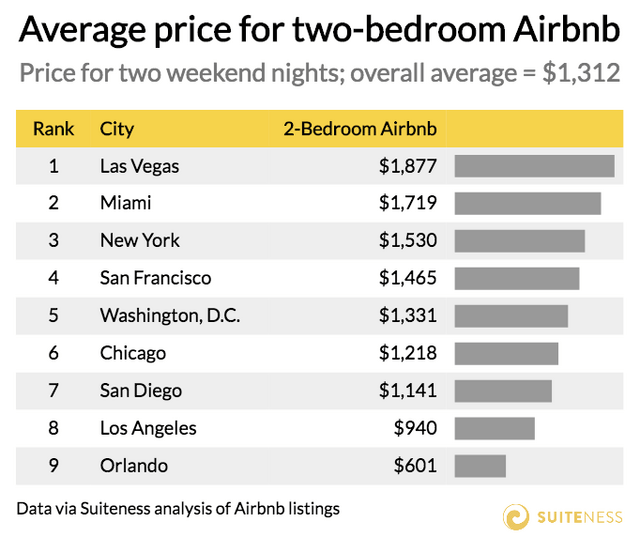 Airbnb appears to be cheaper than hotel rooms and suites — though these bookings often come with extra cleaning fees and platform fees that can boost the price up to a few hundred dollars over a two-day stay.

Lastly, to help navigate all this data, here’s a “cheat sheet” with both high and low season averages for each accommodation type, by city. 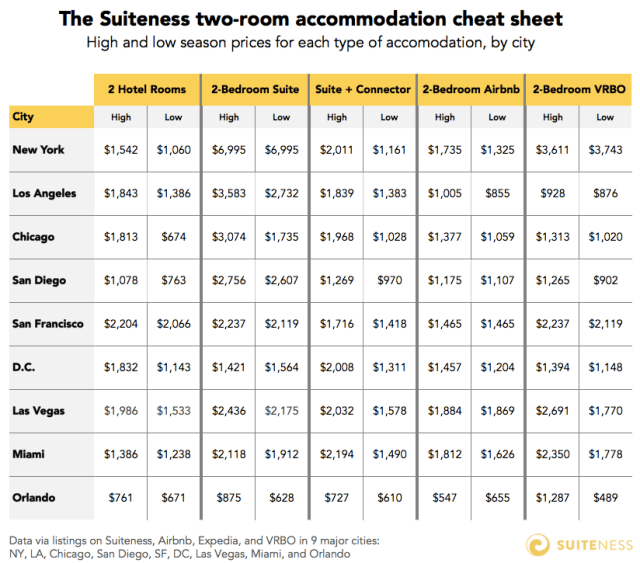 So, what does this data ultimately tell us?

It’s easy to think of hotel suites as a ridiculously expensive, intangible booking option for vacations — an accommodation reserved for presidents and celebrities. But suites can actually be a lot more affordable than you might think. Sometimes, they could even be the cheapest possible option for a large group.

By booking a connector suite you can save more than $1,100 over a standard suite price. And when you consider the average group size that stays in a connector suite is 5.9 people (compared to 3.5 for a traditional suite), the cost per person is even lower: $251 per person for two weekend nights, versus $761 per person, on average.

Lastly, while Airbnb does offer a slightly cheaper alternative to a connector suite, one should consider the additional amenities a suite offers. For an average of $86 more per night, a suite offers: first-class customer and concierge service, fully-stocked inventory and an on-call maintenance staff; housekeeping at no additional cost; and a huge convenience factor.